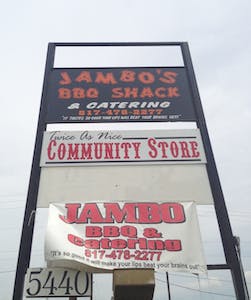 Since 1989 Jamie Geer has been manufacturing barbecue pits for his company Jambo Pits. These days, many of the smokers that come out of his welding shop in Burleson are destined for the competition circuit. You can find the shiny custom paint jobs of famous barbecue competitors like Johnny Trigg and Tuffy Stone. Both of those names will be familiar if you’re a fan of the show BBQ Pitmasters. Johnny Trigg has competed in past seasons and Tuffy has been a member of the judging panel for many seasons.

In this current season Jamie was eliminated from BBQ Pitmasters in Episode 7. His smoked wings were too spicy in New York. Of course he smoked everything on his own shiny Jambo pit, but you won’t find one at his new restaurant. He uses a gas-fired Ole Hickory rotisserie. When I asked Jamie about his choice in smokers he said a Jambo pit just didn’t have the capacity he needed. He’s been pretty well slammed since he’s been open. There are only a few tables inside and they were all full just after 1:00 on a Thursday. Every customer that came in the place stopped at my table to say hello. None of them cared who I was, they wanted to thank my dining partner Bud Kennedy for helping find this out of the way joint south of Fort Worth. About a month earlier he wrote in the Star Telegram that Jambo’s was making Rendon a barbecue destination, and people listened. They’ve been selling out every day since.

In a brilliant flash of marketing genius Jamie created a spectacle of a sandwich that just aches to be photographed. The “Jambo Texan” is a stack of sliced and chopped brisket, pulled pork, smoked bologna, sausage and ribs all layered between two thick slices of Texas toast. With a couple of sides it should be able to feed a family of four, and it’s only $12. As a sandwich it’s completely impractical, but it has worked wonders to spread the word about this place via social media. It makes a statement, but if you try to get your face around the thing you’re left pretty much hopeless. I tried. But when it’s disassembled the parts can stand on their own.

Jamie is a competition cook, so it’s no wonder his ribs are on the sweet side. They are also of superb texture that any competition judge would score well. Thankfully he doesn’t candy-coat them so you still get some of the smoke. These would be at the top of my list on a return trip. Pulled pork was moist and flavorful as was the sausage that was cut in half lengthwise in order to rest on the sandwich. The thick slice of bologna was great. It was had a flavoful rub and a genuine smoky taste. This might be the first time I’ve had smoked bologna and didn’t think it just tasted like regular old bologna. The chopped brisket from the point end of the brisket was also great. It was the smokiest of the meats and was thoroughly juicy – much better than the sliced beef. 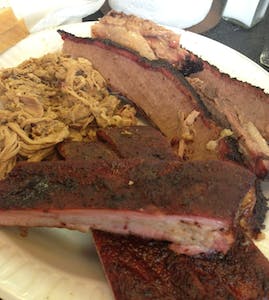 Competition brisket and good fatty slices of moist, well-cooked, tender brisket are diametrically opposed. Most judges in a competition would look down their noses at a speck of fat on their brisket slices. That’s probably because what would be left on their would be white undercooked fat. It’s more common to cook briskets faster in competition, only serve the flat, and not cook the meat as long. This allows for nice even slices that will stay together well. Injections are there to keep the meat juicy since a hotter cooking temperature will dry it out without the added moisture. What’s being served at Jambo’s is plenty smoky and flavorful, but it’s just not done. The slices from the flat are thick and not very tender. They were not only hard to pull apart, but the meat was dry too, and any moisture the fat could have provided was scraped and trimmed away before it got to the plate. The slices from the point had plenty of fat left on, but like the flat it was all undercooked. That meant tough meat and white fat that was too chewy to be enjoyable.

For now Jambo’s is a great barbecue joint in the Fort Worth area with an impressive sandwich and great ribs. I’d drive there again from Dallas. With a little more patience on the brisket it could be worth the trip from a lot further than Dallas.