In a gas station just south of the University of Houston campus you’ll find some of the best fried catfish you’ll ever eat and some great barbecue to go along with it. The barbecue comes from the experienced hands of co-owner Ray Busch who has been serving smoked meat to the public via a food truck since 1985. He didn’t settle down here until he made his good friend Maxine Davis his business partner three years ago. He gained more than just a partner when in 2013, Maxine brought her son Herb Taylor on as a pitmaster in training. After a six year stint in the NFL (his Packers jersey hung on the wall above our table) he was ready to learn the restaurant business.

The place was popular on a Friday afternoon, but the line moved quickly. Don’t be dissuaded if there are a few folks ahead of you since you’ll need the time to look over the extensive menu. It’s a mash-up of Southeast Texas cajun, fried fish, and barbecue. If it’s barbecue you’re looking for, then it’s hard to beat the four meat sampler plate for under $15. The only problem is you’ll have to choose between one of the many house made links. A large link of spicy, smoked boudin could serve as a full meal plus side dish. It’s heavy on the rice, which Busch says differentiates Southeast Texas boudin from what is served over in Louisiana. They also smoke it here which gets the casing just crispy enough to eat right along with the link. The smoke coupled with the spice will make it hard to ignore on any future visits. 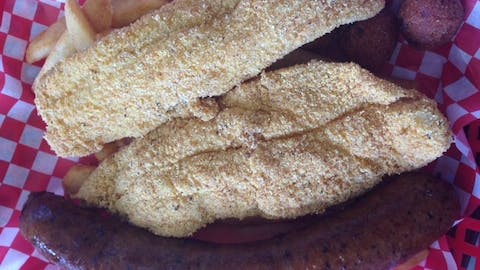 Other sausage options at Ray’s include the Lott link which is an all beef sausage that is another signature of Southeast Texas. I kicked myself when I noticed it for the first time on the online menu after I got home. I might just hop a flight to try it, but the house recipe beef and pork sausage was a solid stand-in. The spices were reminiscent of a crawfish boil and the smoke was laid on thick. It was one of the more unique sausages I’ve had in a while.

While we ate, Busch talked about a seafood sausage that he’s been working to perfect. Look for it on a future menu, but there’s plenty of seafood options already. Thick slabs of cornmeal-breaded catfish were fried to golden perfection. The coating shattered when bit into, and a rush of salty seasoning eliminated any need for tartar sauce. I don’t remember a better bite of catfish. I tried to persuade Busch to make it one of the meat options on the barbecue sampler platter. He wasn’t sold on the idea, so for now it’s a build your own surf and turf at Ray’s.

The rest of the smoked items were hit and miss. Both the chicken and brisket had good smoke, but came out dry. The skin on the chicken was flabby and hard to bite through. Most of the fat was gone from the lean brisket, but it was still good and tender. You’re better off specifying fatty brisket on your visit. A dark crust on the spare ribs held great smoke, and like the rest of the menu, they don’t skimp on the seasoning. The meat came from the bone nicely, so well that I couldn’t stop until the last juicy bite. 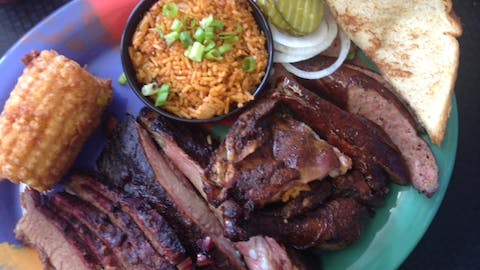 Just like the care they put into the stars of the menu, the supporting cast gets plenty of attention. I’d just tried some fried corn from a North Texas barbecue joint a few weeks before this visit. It was an ear covered in deflated kernels dripping with grease, so I ordered this one skeptically. Wow. What a difference a little breading can make. It’s not the most heart-healthy option. It’s not quite chicken-fried, but I could be persuaded to dip it into some cream gravy. The spicy rice was basically jambalaya without all the meat. It seems built to go along with the fried seafood, but was still enjoyable.

I was introduced to Ray’s through the Houston Barbecue Festival, so I was already familiar with their potential, but the quality of food coupled with the less than ideal location is a reminder that you can sometimes find great barbecue in unexpected locations. If I lived in Houston this is the place where I’d probably be a regular, even if it is in a gas station.