I’ve often thought that the Salt Lick is a joint that serves very respectable smoked meat, and is vastly overrated at the same time. The wait for a table on this sprawling campus of barbecue can exceed and hour, but no worries as you can enjoy drinks and live music al fresco on one of the many picnic tables provided. A visit here isn’t just about barbecue. It’s about atmosphere, catching up with friends, and taking the Salt Lick vibe while enjoying a few cold ones or some of the wine produced by Salt Lick Cellars from the on-site vineyard. Always good marketers the folks at Salt Lick found a way to make middle-of-the-road red and white wines (made from Zinfandel and Viognier grapes respectively) become their best sellers simply by calling them “BBQ Red” and “BBQ White”. I fell for it, but I fell harder for the Sangiovese which was much more pleasing and drinkable on its own. With the Sangiovese as an option (all of these options can only be purchased on site at the Salt Lick) I don’t see a reason to purchase the others if only for kicks based on the name. 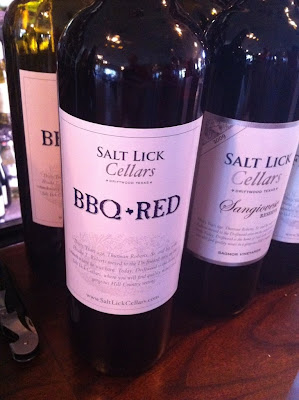 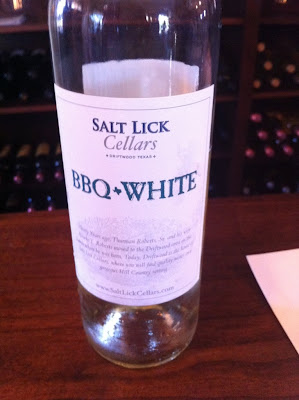 The real reason for this trip was for the beef ribs which are now featured on the daily menu after being available on Sundays for years. The Salt Lick uses back ribs which are usually cut down to the bone unlike meatier short ribs, so I balked a bit at $17 for a two rib plate. When I took my first bite I was amazed at how much meat were on each bone. The tender meat was laced with well rendered fat. The ribs were nicely smoked with a good layer of flavor from the direct heat blast they received on the open pits on display out front. The meat is basted with their thin, sweet sauce while cooking so it helps to form a nice crust. The meat is also coated with the sauce just before serving – a practice that I’m usually not fond of, but it’s different at Salt Lick. Of all the BBQ joints that I’ve eaten at, this is the most successful combination of meat and sauce that I’ve had. It’s a thin oil based sauce that seeps into the hot meat almost becoming one with it. A mere afterthought topping, it is not. 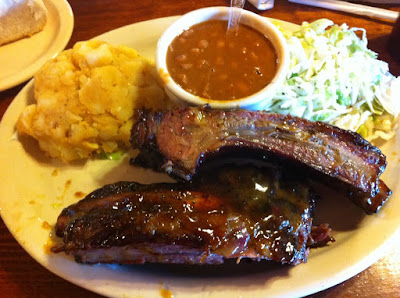 Of the sides, the sesame flavored slaw was the only notably good one. Pintos were simple and underseasoned and the potato salad was just chunks of underdone potatoes bound together by a some mashed potatoes and bit of vinegar. When the bill came I had to run out to the ATM after being reminded of their cash-only policy. After a $2.50 surcharge, I had enough cash for the the check and a shirt. It amazes me that a joint won’t take credit cards…oh wait, they do the next door over in the beer and wine shop. Maybe they’re just making too much from diners who have to pay that ATM surcharge.

After the meal I wanted to investigate a claim made by Scott Roberts, owner of the Salt Lick, in an interview with Texas Monthly a little over a month ago. When asked about whether or not they use gas-fired cookers to smoke, he said “We had some smokers that we put in that were gas-fired, but we don’t really do those anymore because they have a drier heat than the wood does.” I find it hard to believe that the small pits on display could really cook all the meat required to feed 2000 people on a Saturday. 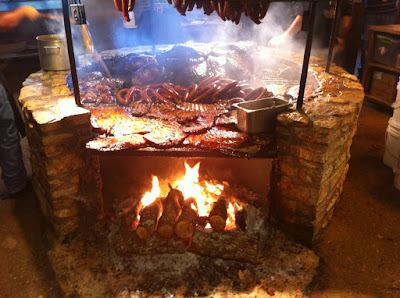 These pits are certainly beautiful and provide a great spectacle at the entrances. Sauce is mopped onto mounds of meat while the fat drips and sizzles on the fire below. The resulting live oak smoke creates a fragrant dining area and whets the appetite, but what’s back in those huge kitchens not open for public view? 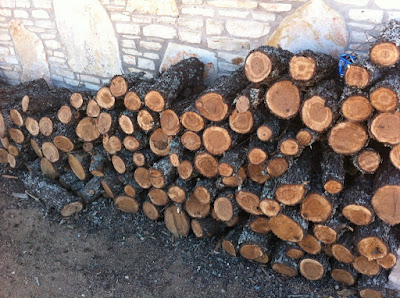 I hung back at the stacks of live oak waiting for someone to come grab a few sticks. Before long an amicable pit man came out and I asked about the pits in the kitchen. Without a hint of shame he said there were six gas-fired (presumably Southern Pride or Ole Hickory) smokers where they smoke the meat overnight. The meat is then refrigerated and basically reheated for about three hours on the direct heat pits on display. I’m not saying this man should be ashamed of how the meat is smoked, but it’s obvious the owner was trying to hide it in that recent interview. If you’ve already got 2000 customers waiting in line for your food on a Saturday, why be deceiving about how the meat is smoked?

I’m not ashamed to say that I enjoyed this meal just like I have others here in the past. These ribs might not be the best thing I ever ate, but they were the best beef back ribs I’ve eaten anywhere. I just wish they could be honest about how their meat is prepared. Not withstanding their mailed-in performance at the Texas Monthly BBQ Festival the following day (it was some of the poorest meat there) their rating remains the same. 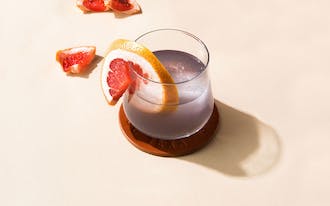 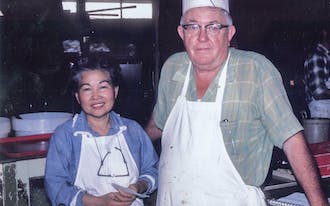 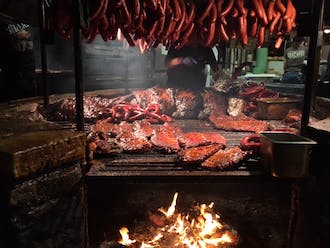