On today’s House calendar there is a bill by Representative Phil King of Weatherford that would make Warner Brothers Foghorn Leghorn proud. As the Southern-accented rooster would say: “Two half nothin’s is a whole nothin’ and I know what I’m talking about.”

The bill is HB 1110 by King to establish a process for Texas to choose delegates if or when a national constitutional convention is called. It’s the kind of bill you pass when you want to give the Convention of the States Project what they want without giving them what they want.

Actual legislation to call for a constitutional convention on such items as a balanced budget amendment or term limits for Congress – HJR 77, HJR 78 and HJR 79 – are all in the House Calendars Committee – the site of many a legislative bill murder in the past.

You can read the House Research Organization report about the process of delegate selection in HB 1110. I’m not going to bother with the details. But consider this, delegates would have to take an oath that they are limited to voting only on whatever was included in the Texas call for a convention.

By my reading, if that Texas call is limited to a federal balanced budget amendment, but the convention also considered term limits for federal judges, the Texas delegates by oath of office would have to cast a present, not voting vote. If delegates from those states that regularly vote Democratic in presidential elections wanted to add gun control measures, well, those Texans also would have to cast present but not voting votes.

The House may well spend a great deal of time debating this measure today and the vote most likely will be along party lines. But it’s a bill that is unlikely to ever be used, and its passage will just give politicians the ability to say they did something without actually doing anything.

So when Phil King takes the front microphone to promote HB 1110 today, remember the words of Foghorn Leghorn: “As senior rooster ‘round here, it’s my duty, and my pleasure, to instruct junior roosters in the ancient art of roostery.” 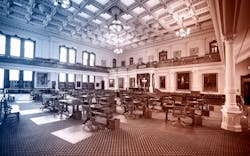