With legislation to block county clerks from issuing same-sex marriage licenses dying in the Legislature, it is not surprising that social conservatives are asking Governor Greg Abbott to call a special session on the issue.

The U.S. Supreme Court is expected later this month to rule on whether state bans on same-sex marriage are constitutional, and the conventional wisdom is the court is going to say the bans are unconstitutional. Social conservatives had hoped to block implementation in Texas by passing a law that banned the issuance of same-sex marriage licenses, giving the state a means for continued litigation. The conservatives hope to use Harris v. McRae, 448 U.S. 297 (1980) to argue that the federal government cannot force states to spend local money to enforce a federal policy; i.e., issuing licenses for same-sex marriage.

After a legislative session where Abbott can claim a level of success, I find it difficult to believe he would call a special session on such a divisive issue, especially while he is still signing and vetoing bills. But on a single-issue special session, the only thing to stop a bill such as this from passing quickly would be a quorum break by Democrats.

The petition to Abbott is posted below.

As widely publicized, there will soon be attempts to violate the Texas Marriage Amendment in our Constitution, despite its passage by more than 76% of Texan voters.

Several bills were introduced in the 84th legislative session to defend the Texas Marriage Amendment.  Despite the support by a super-majority of legislators for marriage as the union of only one man and one woman, none of these bills to defend our Constitution reached the House or Senate floor.

We are not willing to give up on our obligation to defend the Texas Constitution.  We trust that you support SR 1028, which recently passed by a bipartisan vote of 21-10:

‘WHEREAS, The Members of the Senate of the State of Texas do hereby affirm our sworn commitment to faithfully execute the duties of the office to which we have been duly elected and to uphold the Texas Constitution … ; and

WHEREAS, We solemnly proclaim that the institution of marriage is clearly established in Article 1, Section 32, of the Texas Constitution as a union consisting of one man and one woman …; and

WHEREAS, Traditional marriage is the bedrock institution of both our society and the success Texas has been blessed to experience since our admission as the 28th state within these United States of America; now, therefore, be it

RESOLVED, That the Senate of the State of Texas, 84th Legislature, Regular Session, hereby affirm the preservation of the present definition of marriage as being the legal union of one man and one woman as husband and wife and pledge to uphold and defend this principle that is so dearly held by Texans far and wide.’

A Legal Memorandum on Traditional Marriage, which contained similar language, was signed by 93 Republican State Representatives dated May 14, 2015.

We request that you exercise your constitutional power to call a special session for consideration of legislation consistent with SR 1028, to defend the Texas Marriage Amendment.

Thank you in advance.

How Teen Pregnancy May Have Saved Gay Marriage—UPDATED 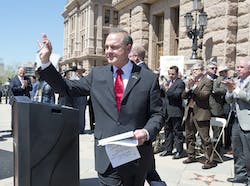 Hell, Satan and a Ghost from the Past