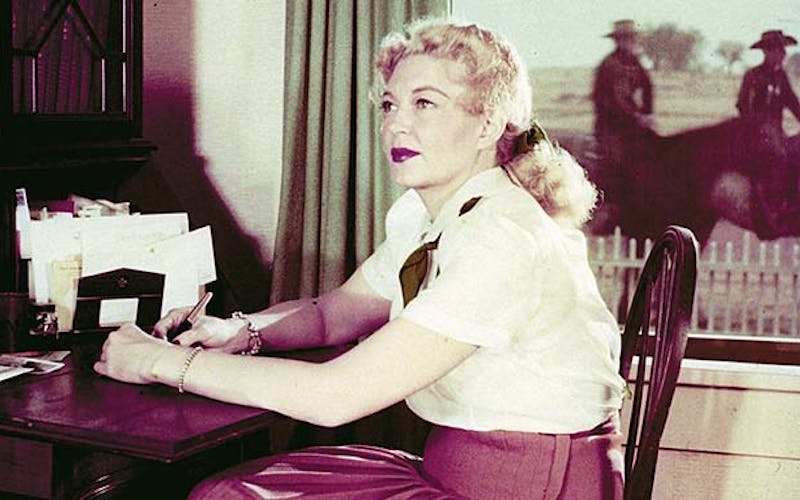 Cindy Walker at her home in Mexia circa 1950.
Courtesy of Country Music Hall of Fame

Cindy Walker, born in Mart, east of Waco, was one of country music’s most prolific songwriters, turning out hundreds of songs, many of which became standards. Her songwriting methodology was simple: start with a good title and the song will essentially write itself. “The title tells the story,” she once said. “If you can get a real good title, you’ve got something.”

One of her early champions was Bob Wills and His Texas Playboys, who recorded more than fifty of her songs. In 1947 Tommy Duncan, the singer for the Playboys, called her with an idea for a title: “Watching the Bubbles in My Beer.” As she later recalled, “I couldn’t have been more surprised if he had hit me in the face with a wet squirrel. I said, ‘You’re kidding,’ but I could tell by the silence on the other end of the line that he wasn’t kidding.” According to Walker, Duncan went on to describe “a lonely man sitting in a barroom not talking to anyone, just thinking of someone or something that happened in the past—just remembering and watching the bubbles in his beer.” Walker got to work, and the resulting song became one of the all-time great barroom weepers.

Walker died in 2006, just nine days after Willie released a tribute album, You Don’t Know Me: The Songs of Cindy Walker. The first song on the album? “Bubbles in My Beer.”

Tags: Bob Wills and His Texas Playboys, Story of a Song