This was their first debate for the votes of Texans. U.S. Senator Ted Cruz was relaxed. Democrat Beto O’Rourke was impassioned, though sometimes strident. Both were self-confident on their facts and stands on issues.  Cruz showed he is counting on a Republican voter turnout that will, as usual, swamp the Democrat in the race, hitting O’Rourke as a liberal out of touch with average Texans. O’Rourke repeatedly portrayed himself as above partisanship as he tried to convince disaffected Republicans and independents to change the Texas election math in favor of a less bitter and more compassionate politics.

Cruz kept O’Rourke on the defensive, and at times the El Paso congressman appeared frustrated, with the muscles and veins on his neck standing out as he spoke. And although O’Rourke called out his opponent for saying things that were “untrue” or “misleading,” to me, it looked like O’Rourke was having to fight the temptation to resort to one of President Trump’s favorite jibes at Cruz from the 2016 presidential campaign, “Lyin’ Ted.”

That was no more evident than at the close of the debate when the moderators asked the candidates to say something nice about one another. O’Rourke was gracious. Despite their differences on issues, he said he appreciated the sacrifices Cruz’s family has to make for his service and said he believes Cruz is doing what he thinks is best for the country in the Senate. Cruz made the response about himself, saying there are tears in his household when he leaves Houston for Washington each week. “I’m sure there are in the O’Rourke household, too,” Cruz said. Then he took the rest of his time to liken O’Rourke to democratic socialist Bernie Sanders, an independent senator from Vermont who ran for the Democratic presidential nomination in 2016. O’Rourke has some similar positions as Sanders but takes pains to distance himself from some of the more radical ideas, but Cruz sought to close that gap. “Bernie Sanders believes in what he’s fighting for, believes in socialism,” Cruz said. “I think you are absolutely sincere, like Bernie, that you believe in an expanding government and higher taxes…You’re fighting for what you believe in, and I respect that.”

This was a debate that created no clear winners. The supporters of either candidate could come away claiming victory, but the exchange probably did little to sway those voters who are still trying to make up their mind. Even though the debate had to compete with Friday night high school football, the fact it was carried by many network television stations across Texas means their exchanges probably will have one of the highest viewerships of a Texas political debate in years. The debate Friday was the first of three. It was moderated by Gromer Jeffers of the Dallas Morning News and Julie Fine of KXAS-TV in Dallas. The debate occurred at Southern Methodist University.

O’Rourke’s challenge to Cruz is the closest and most sustained effort that a Texas Democrat has made in more than a decade. The party has not won a statewide election since 1994, and over the years the Democrats have faded to the point that the party nominees have to settle for a vote share in the high thirties to the low forties. But so far, O’Rourke has been running tight on the heels of Cruz, traveling the state, attracting large and enthusiastic crowds. On Friday, the national Cook’s Political Report moved the Texas race from “leans Republican” to tossup. In a typical mid-term Texas election of recent memory, low voter turnout would give a Republican candidate a substantial advantage; however, this year there is an anger and enthusiasm among Democrats, and some Republicans have been disgusted by President Trump’s character and policies. An unanswerable question is whether these disaffected Republicans will cross party lines to vote for O’Rourke, or will the choose a safe-harbor vote for Libertarian Neal Dikeman, or make a decision to either stay home or vote for Cruz despite their misgivings.

Cruz was prepared for a quick counter to anti-Trump sentiment from O’Rourke, showing a practiced defense when Cruz was asked about his relationship with the president following the nasty rhetoric of 2016 when Trump attacked Cruz’s father and wife. Cruz said he has moved on from that campaign in the interest of working with the president on behalf of Texans.

O’Rourke said it was Cruz’s business how he wanted to handle the personal attacks against his father and wife. “Listen, if the president attacks you personally, your wife, your father, how you respond is your business,” O’Rourke said. “But when the president attacks our institutions in this country and allows a foreign power to invade our democracy—that is our business. We need a U.S. senator who will stand up to this president where we must, work with him where we can.”

Cruz conveyed a defense of Trump that didn’t appear defensive. “But you know where his question ended?” Cruz asked one question later. “It ended on an attack on Donald Trump, and the modern Democratic Party is just consumed with hatred for Donald Trump.” The irony is that, before that statement, Cruz had been tying O’Rourke to the policies of Hillary Clinton. After Cruz said Democrats are consumed with hatred against Trump, he rarely mentioned Clinton again.

There probably is no issue where the differences between Cruz and O’Rourke were more clear than on immigration. O’Rourke defended having a path to earned citizenship for young people who were brought into the country illegally as children by their parents, youth known as Dreamers, and he opposed President Trump’s proposed border wall, if for no other reason than building it would require seizing private property by eminent domain. Cruz responded that he believes in securing the border with a wall, technology and “boots on the ground.” Cruz said his father legally immigrated from Cuba in 1957, but granting citizenship to the twelve million U.S. residents who entered the country without authorization would be a “serious mistake.” Prompted by the moderators, O’Rourke responded first in the exchange.

Throughout the debate, Cruz kept linking O’Rourke to Sanders and national Democrats such as House Minority Leader Nancy Pelosi or outspoken Massachusetts Senator Elizabeth Warren. O’Rourke returned time and again to the idea that he was for “Republicans and Democrats and independents alike” and accused Cruz of partisanship. “I could care less about either party at this moment, at this deeply divided, highly polarized time in our history.” O’Rourke noted five times that he had been to all 254 counties in Texas and pointed out that Cruz spent his first several years as Texas’s junior senator running for president.

In one of their sharpest exchanges, Cruz said O’Rourke had described police officers as “the new Jim Crow,” oppressors of black men in particular. O’Rourke denied it.

The exchange came from a discussion O’Rourke had at Prairie View A&M University on Wednesday. Drawing on a 2010 book by Michelle Alexander called “The New Jim Crow: Mass Incarceration in the Age of Colorblindness,” O’Rourke talked about how the criminal justice system represses people of color.  Here is what O’Rourke said at Prairie View:

Also this week, Cruz was confronted at a Webster town hall by the mother of one of the students killed earlier this year in a mass shooting at Santa Fe High School that left ten students and teachers dead. She screamed at him for having refused to talk to her or do anything about gun control. Rhonda Hart’s daughter Kimberly Vaughn died in the school’s art class.  “You still have not introduced common-sense reform,” Hart yelled.

In the debate, Cruz said schools need to be hardened with more police officers patrolling the halls. He also blamed society for “removing God from the public square.” O’Rourke came back with a tale of a teacher who told him more guns in schools would not stop school shootings. “Thoughts and prayers, Senator Cruz, are just not going to cut it any more,” O’Rourke said.

The overall effect of the debate had more to do with affirmation for the supporters of each than to bring new voters to their camps. Cruz gave his backers sharp soundbites on red meat issues. The responses from O’Rourke were more thoughtful and would delight those people who have been showing up at his rallies, but either from the moderators’s questions or Cruz’s responses, O’Rourke often looked more like a candidate on the defense than offense. Two more debates remain. To win, O’Rourke will need to knock Cruz off his game of easy ideas and platitudes.

Here’s the debate in its entirety: 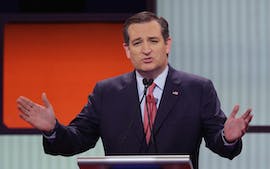 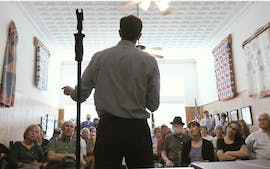 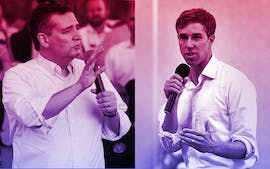 Are Some Republicans Ready to Abandon Ted Cruz for Beto O’Rourke? 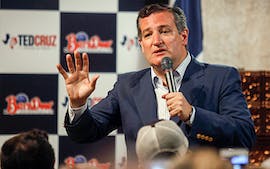