I’m not sure I’ve ever come across a criminal as diabolical and ruthless as Houston’s Redrick “Red” Batiste, who robbed armored cars and murdered the couriers with a sniper rifle. When I first wrote about him in the May 2018 issue of the magazine, though, I couldn’t quite answer one of the central questions: What led him to turn from a strait-laced good neighbor and dad to a chillingly meticulous murderer and robber straight out of a Michael Mann movie?

Last week, four of his accomplices—Nelson Polk, 40, Marc Hill, 48, John Scott, 43, and Bennie Phillips, 31—were found guilty in federal court on charges of “aiding and abetting” Batiste. (The fifth accomplice, Trayvees Duncan-Bush, 31, had already pled guilty.) A lot of people, including me, hoped the trial would help shed light on Batiste himself. The trial itself didn’t, but the occasion did offer an opportunity for me to speak with sources who helped paint a more complete picture of the man and his motives.

First, let’s revisit the crimes. Beginning in 2015, when he was 35 years old, Batiste recruited a team of accomplices—a few of them friends from his neighborhood—to help him rob armored cars. Their operation was unlike anything the FBI had ever seen. Parked in an SUV at a distance of fifty or so yards away from a bank, far removed from any surveillance cameras, Batiste would use a sniper rifle to shoot a courier coming out of an armored car with bags of money. As the courier lay dying, Batiste’s masked accomplices would race up to the bank in another car, grab the money bags, and take off.

It was a brutal but very efficient operation, and it wasn’t until December 2016, after the FBI came up with an ingenious sting operation, that Batiste and his gang were finally caught. Batiste was killed in a shootout with Houston Police SWAT officers, and five of his accomplices were arrested.

When I wrote my 2018 story on Batiste, I talked to neighbors and relatives who described him as a clean-cut, immaculately dressed young man who had dreams of becoming a real estate entrepreneur, buying distressed properties in his crumbling Acres Homes neighborhood and opening small community-oriented businesses, from beauty shops to day care centers to a grocery store. His pretty girlfriend had given birth to a daughter, their first child. Batiste seemed to live a fairly wholesome life, going so far as to take the time to talk to kids who dressed like gangsters, wearing pants that sagged below their waists. (“He’d give them a lecture,” said his girlfriend, Buchi Okoh, “telling them they needed to represent themselves in a much better way.”) And at nighttime, Batiste preferred staying home—playing Scrabble on his computer, reading self-improvement books, or watching Netflix.

Although he had committed minor crimes as a young man, he hadn’t been charged with any violent crimes except for a couple of misdemeanor assault charges. Nor had he been arrested for any crime at all since 2009. People told me that during those years between 2009 and 2015, Batiste strove to make a legitimate name for himself. “But if you are young and black, dressing nice and driving a nice car, everything you do is policed, especially if you are living in the poor Acres Homes neighborhood,” said one of his Acres Homes buddies, who asked that his name not be published. “That was Red. The police were always pulling him over, thinking he was up to some shit. When he’d tell them that he was trying to improve the neighborhood, they’d just laugh and pat him down. He was always getting profiled, getting harassed, and the cops didn’t care.”

One longtime resident of Acres Homes, 81-year-old Tommy Albert, who had known Batiste since he was a boy, recalled an afternoon they were leaving a barbecue restaurant. “We were getting into Red’s $75,000 Jeep with four-wheel drive, everything loaded up, and the police pulled up, blocking Red’s way out, and he said, ‘Why are you cops fucking with me?’ Well, that got them mad and they made him get on the ground wearing his nice clothes. And they put their knees in his back and took him to jail on some false charges. He had to spend money on a lawyer to get the charges dropped. I remember Red told me, ‘These sons of bitches smile in your face and stab you in the back.’ I said, ‘Now, Red, not all the police are like that.’ But I could see this anger in his face.”

Albert also said that Batiste was growing more and more upset that banks wouldn’t loan him money for his real estate projects. “He wasn’t trying to build a skyscraper—just a little store. And the bankers would give Red a look—this young black male with no college degree—and they’d say no. Or they’d want to have a white man co-sign on the note. Red would say to me, ‘You can’t win in this society. You can’t win.’”

When I interviewed Okoh, who met Batiste in 2013, she insisted that he was always well-mannered around her, perfectly polite. But she too noticed an anger in him. In 2014 and 2015, he became fixated on the police shootings taking place around the country of unarmed black males, like 12-year-old Tamir Rice of Cleveland, Ohio, and 18-year-old Michael Brown of Ferguson, Missouri. “He would say the time was coming where he wouldn’t be able to turn the other cheek,” said Okoh. “But he never talked about killing anyone.”

The trial of Batiste’s accomplices was filled with riveting testimony about Batiste and his men tracking what they called the “commissaries” (armored cars), holding “scrimmages” (practice runs before each robbery) and planning escape routes to evade the “haters” (the police). There were wiretapped calls, intercepted texts, and extensive audio and video footage of the gang at work. At one point, the trial was interrupted when the wife of one of the accomplices, Marc Hill, was accused of trying to sneak a razor blade to another defendant, Nelson Polk. At another point, Hill and Polk were removed from the courtroom following angry outbursts.

To my disappointment, however, the judge refused to allow the attorneys to present any significant testimony about Batiste’s motives or behavior. Nevertheless, after the trial concluded—all four men were found guilty, and their sentences will be announced later this summer—I talked to sources close to the FBI investigation who told me that Batiste had indeed been consumed by his sense, whether real or imagined, of racial injustice. Before committing his armored car robberies, he had begun reading the works of black writers who railed against white supremacy. He had bought guns that he hid throughout his house. And eventually, he had begun talking to a few of his friends about his desire to ignite a “race war.”

FBI agents who later searched Batiste’s computer found letters he had written to prison convicts who had murdered white cops, telling them that he appreciated what they had done. They came across a Facebook posting in which Batiste had worn a black mask over his face and ranted about living like a gangster, to “keep things real.”

FBI agents also came across evidence (they have yet to reveal exactly what it is) that led them to believe that Batiste had murdered a white man who owned several McDonald’s restaurants and that he had murdered Joseph Stewart, the well-known owner of Houston’s Stewart Cadillac, where Okoh worked as a saleswoman. The Stewart murder was front-page news in Houston. Late one night in May 2015, Stewart was returning to his townhome near Houston’s Montrose area when gunshots rang out. He was found dead, lying just outside his garage. An unknown man wearing a hooded sweatshirt had been seen running from the scene. According to one source I spoke to, Batiste was apparently angry at Stewart for not treating Okoh as well as he treated his white employees. (When I asked Okoh about Stewart’s murder, however, she insisted that she had no problems at her job and that Batiste had nothing to do with Stewart’s shooting.)

Whether Batiste was involved in the murders of Stewart or the McDonald’s owner, there was no question that he was the mastermind behind the armored car attacks. Despite his congenial outward appearance—he continued to walk his white bulldogs every day and wave at his neighbors—he had descended into an unfathomable ruthlessness, driven to exact revenge. He even had bought a vest that suicide bombers wear. If the FBI had not caught him, there’s no telling what he would have done next. 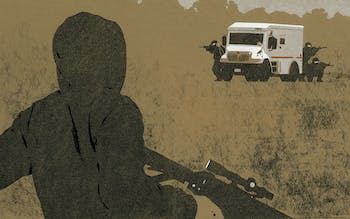 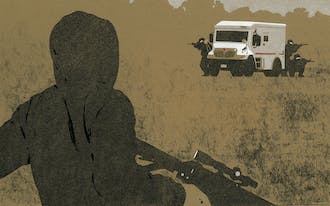