President Donald Trump’s recent threat to close parts of the U.S.-Mexico border followed a pattern that has recurred throughout his presidency, one that his opponents sometimes misread as stupidity. He engages in aggressive and public brinkmanship over a crisis—sometimes real, sometimes exaggerated—and then credits his aggressive approach for winning concessions, regardless of whether any winning has actually occurred. Maybe the most prominent example: The president threatened North Korea with war, participated in a big summit, and then took credit for preventing the war he had threatened to start.

At the margins, he can secure policy changes this way, but the strategy has other benefits. To his base, it looks like the master dealmaker is talking tough and solving problems—partly because they judge his effectiveness by how angry liberals are. And it keeps him in the news, which to Trump is as important as oxygen. But to maintain the dynamic, Trump has to keep pushing the boundaries of what people will accept. Trump needs to go over the line and then pull back. Sometimes he talks big and does nothing—as he did with his bluster about withdrawing from NATO—and sometimes he follows through, making sweeping changes to U.S. policy, often seemingly at random.

Which brings us to Senate Resolution 535, passed last week by the Texas Senate. The three-page resolution endorses Trump’s increasingly erratic actions on the border. “The Texas Senate declares this crisis at the Texas-Mexico International Border an emergency,” it says, and “supports the president in his efforts to move forward with emergency action.” If Congress keeps failing, the resolution states, the president should be given free rein. All nineteen Republicans voted for the resolution; all twelve Democrats voted against it. A copy was sent to the White House and congressional leaders.

Consider what the Texas Senate is endorsing here: Recent slowdowns at ports of entry have caused tremendous disruption in the lives of ordinary people who depend on those border crossings to get to work, to see family, to get medical care. But more importantly, in the context of the Legislature, it has cost businesses a lot of money. Last week, freight trucks in Ciudad Juárez were reporting waits of up to 22 hours, causing Mexican factories to slow or halt production as inventory piled up. The economic life of places like Laredo is heavily dependent on transshipment and cross-border finance. But it’s not just the borderlands that get hurt. These ports of entry are some of the most important chokepoints in the North American economy, and when they clog everyone feels the consequences, from Brownsville to Beaumont. Even the threat of closing the border has costs, because businesspeople from farmers to General Motors will now have to weigh the possibility of future disruptions in their supply chain.

Lieutenant Governor Dan Patrick has other concerns on his mind. On April 3, Patrick made the case for unilateral presidential action at the border on  Brian Kilmeade’s radio show. (Kilmeade is one of the hosts of Fox & Friends, the president’s favorite morning show.) “I think it is so bad, Brian, that the president needs to do whatever he needs to do,” Patrick said. Asked if he supported closing the border, Patrick hedged. “I’m not for shutting the entire border,” he said. The president could “maybe close one port. We have so many.” Even still, “at some point, when the house is on fire and burning down, you have to do whatever you can to put out the fire.”

In the same interview, though, Patrick also said that the legalization of undocumented immigrants posed an existential threat to the Republican party. “If [Democrats] can hold on another ten years and ignore this,” he said, “they will eventually register all these people in the Democratic party. And once you do that, it’s game, set, match.”

Normally these resolutions don’t mean much, but there are a couple things that make this one stand out. For one, Patrick has Trump’s ear. (Or so Patrick says.) He even skipped the first day of the legislative session to be in Washington, D.C., where he claimed to have helped Trump draft his prime-time address to the nation during the last border wall fight. It seems possible that Trump has spoken to Patrick about this issue more than to any other elected official from a border state, and the resolution is consistent with what Patrick has said he’s recommended to Trump regarding border security.

Second, the resolution may well be the last time the Texas Senate, if not the Legislature as a whole, gets to weigh in on this issue before the presidential election—the next session is in 2021. In the present, Trump’s brinkmanship has led him to threaten to close border crossings. He’s since pulled back and says he’ll revisit the issue in a year if Mexico doesn’t stop migrants—by which time his reelection campaign will be in full swing and he may feel the need to look tougher and stronger. If he decides to take big, unprecedented action—perhaps closing ports of entry—he’ll have in hand a resolution from members of the Texas Legislature telling him to plow ahead.

Imagine continued slowdowns until, at some point next year, President Trump closes border crossings intentionally, for a day or a week or however long he likes. ABC reported that Trump had in fact ordered crossings closed last week, until his advisers talked him out of it. On Monday he fired some of those advisers. Bizarrely, he’s repeatedly offered the assertion that closing the border would make the U.S. money because it would decrease our trade deficit with Mexico. (That’s not how it works.)

To be clear, there is a crisis at the border. That crisis stems from the U.S. having built an immigration system to deter and detain economic migrants from Mexico, often single young men. But few Mexicans are coming anymore. Now the migrants are mostly asylum seekers from Central America, many of them traveling as family units, turning themselves in to Border Patrol at the earliest available opportunity. The different needs of that migrant population and the requirements federal law has placed to house them have swamped the system.

Short of a long-term project to rebuild and stabilize Honduras, El Salvador, and Guatemala, there’s little the U.S. can do to dissuade refugees from coming. But the U.S. can control how it treats and processes asylum seekers, and right now the poor management of the system is leading to the abuse and mistreatment of migrants in U.S. custody, including children.

The president believes the way to fix this is by taking actions that could cause significant economic harm and disruption to Texas. This also carries significant political risks. Texas Republicans have already warned the president that he stands a real chance of losing the state, which would have enormous consequences all the way down the ballot. It’s a puzzling strategy, but not half as puzzling as the fact that the Texas Senate, and the lieutenant governor, is following his lead. 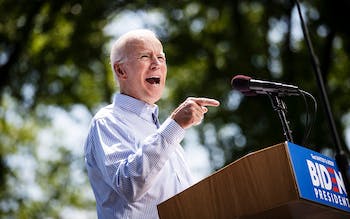 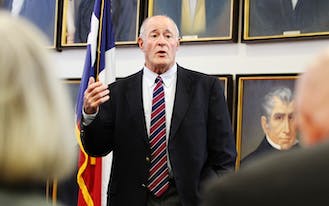 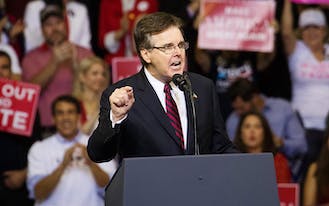