Former San Antonio mayor and Obama administration cabinet member Julián Castro is launching a presidential exploratory committee ahead of a scheduled January 12 announcement about his future political plans. “Some people might say that it’s early, but I believe you have to be decisive,” he told the Associated Press in an interview Wednesday, adding that he will spend the next month traveling and listening to people—and likely trying to generate commitments of support from key Democrats. “I know where I’m leaning for sure.”

An adviser said the 44-year-old Castro has all but decided to throw his hat into what is expected to be a crowded Democratic field seeking the 2020 nomination. Castro’s announcement precedes by one day a scheduled appearance with his twin brother, U.S. Representative Joaquin Castro, D-San Antonio, on “The Late Show With Stephen Colbert” and could signal the beginning of a monthlong buildup to his formal announcement. An exploratory committee allows a candidate to legally begin to raise and spend money.

The move by Castro gets him out of the gate for the 2020 campaign first, hopefully eclipsing other more prominent Democratic contenders. Currently, the list of potential candidates includes fellow Texan Beto O’Rourke, whose recent loss to incumbent U.S. Senator Ted Cruz gave the El Paso congressman a national profile and spurred a move to encourage him to make a run for the White House. That speculation was underscored by recent reports that O’Rourke met with former President Barack Obama in Washington on November 16.

Castro has been considering a run for president for at least a year visiting key early primary states such as Iowa and New Hampshire throughout this year. He also established a political action committee called the Opportunity First PAC, which has raised less than half a million dollars. This compares with O’Rourke’s demonstrated fundraising prowess as he set a national record in his race for the U.S. Senate, raising more than $80 million with little to no help from political action committees. Following a script of some other past presidential candidates, Castro in October published an autobiography: An Unlikely Journey: Waking Up from My American Dream.

As speculation grew about O’Rourke’s intentions following his November defeat, several political advisers suggested that Castro would serve his interests best by announcing his candidacy early.  “Beto complicates things for Julián. But it’s also an opportunity,” said Mark McKinnon, a longtime, Texas-based Republican political consultant who has advised George W. Bush as well as the late John McCain in their runs for president. He said Castro needs to move fast. “Lay down the marker now. No hesitation. ‘I’m running. And running to win.’”

Last month, Castro told Texas Monthly that he fully expects a crowded primary field and that no one else’s candidacy would influence his ultimate decision on whether to run. Castro told the Associated Press on Wednesday that a large Democratic field should benefit voters. “A lot of people are going to run in this Democratic primary and that’s going to be good for both the party and the country,” he said. “It’s going to be good for Democrats to get a sense of people of different backgrounds and different perspectives. I think it’s going to be cathartic.” Castro also said no Democrat can “out gutter” President Trump and win.

Castro acknowledged that there will be candidates who are more prominent and others who have deeper pockets. “I was thinking the other day that I don’t think at any time in my life that I’ve started out as a frontrunner. If you go to the neigborhood that I grew up around, there’s nobody there that starts off as a frontrunner.” 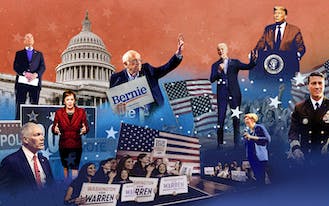