Police officers in Dallas and Denison have been caught making and circulating bigoted posts on social media, often advocating for the use of deadly violence against the citizens they are paid to protect and serve. The posts were compiled by a nonprofit, The Plain View Project, and the story was first reported by BuzzFeed News earlier this week.

The Plain View Project, in conjunction with Injustice Watch, a Chicago-based watchdog group that focuses on criminal justice issues, investigated social media accounts of more than 2,900 officers, plus 600 retired officers, from eight departments across the country, including Dallas (1,048 total posts) and Denison (seven total posts), extending as far back as 2011. Many of the posts included in the database, available here, are disturbingly violent, and often target African Americans, activists, Hispanics, immigrants, Muslims, LGBT people, and women.

“Just another savage that needs to be exterminated,” one Dallas officer posted on Facebook in November 2017, along with a link to a story about a deadly robbery at a Dollar General. “The idea that society opresses [sic] women is laughable,” reads a meme shared by another Dallas cop in December that same year. “Despite what your momma told you,” reads another meme shared by a Denison officer in 2013, “violence does solve problems.” 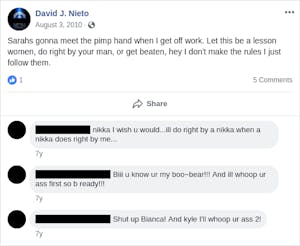 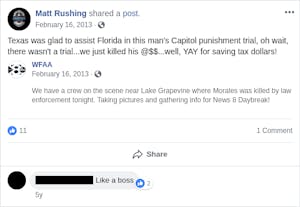 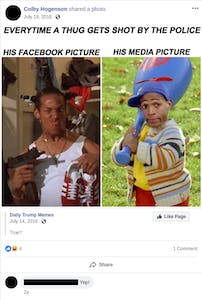 Many of the posts shared by Dallas and Denison officers originated from far-right content-producing websites known for spreading fake news, like the Gateway Pundit, or from “Blue Lives Matter” websites that frequently publish posts meant to stoke hatred against those who criticize police brutality and racial injustice. (Despite publicly claiming to be committed to stopping the spread of fake news on its platform, Facebook has generally failed at preventing the circulation of outrage-inducing content from websites like these.)

Some of the posts glorify the use of force against protesters and make light of the use of deadly force or tasers. One Dallas officer shared a post portraying the driver of a truck plowing through a crowd of protesters. “BLM and the KKK are just two different side [sic] of the same hate coin,” another Dallas officer wrote, referring to the Black Lives Matter movement.

Many posts express a jarring lack of empathy. One Dallas officer shared a petition titled “Sandra Bland Parkway is a disgrace,” and commented, “Naming a street and park after a drunken, disrespectful, mentally ill and suicidal person is ridiculous! This woman accomplished nothing note worthy and positive in her life to merit such a thing.” Bland was found hanging in her Waller County Jail cell in 2015 after she was aggressively arrested during a routine traffic stop. The state trooper who arrested Bland was later fired and has been permanently banned from law enforcement. The stretch of road where Bland was arrested was later renamed in her memory. 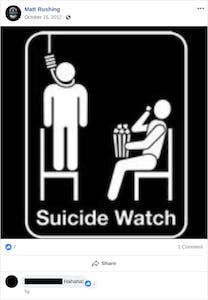 In another Dallas officer’s post, about the Islamic State, he wrote: “We need to carpet bomb these people off the face of the earth. Anybody near them is just a casualty of war!!!!”

Posts frequently expressed Islamophobic sentiments. “Islam is Satanic,” wrote one retired Dallas officer on Facebook. Another Dallas officer re-posted a graphic of a skull surrounded by text stylized as Arabic script that said: “I am the infidel the imam warned you about. I do not come to bring peace but the sword.” 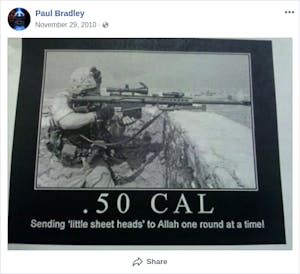 Many officers re-posted racist memes or made racist comments, while others spread homophobic and transphobic messages, or propagated anti-semitic conspiracy theories. There are way too many of these posts to list here—if you can stomach reading more, here’s a link to the complete database.

The revelation of these social media posts comes in the wake of high-profile instances of deadly violence against African Americans by officers in the Dallas area. Earlier this week, fired Dallas cop Amber Guyger appeared in court ahead of her murder trial in the fatal shooting of Botham Jean, an unarmed African American man who was killed in his home after Guyger says she mistook his apartment for her own and thought he was a burglar when she entered. Last summer, fired Balch Springs officer Roy Oliver was sentenced to fifteen years in prison after fatally shooting 15-year-old Jordan Edwards outside of Dallas. While responding to a call near a house party, Oliver fired indiscriminately into a car full of unarmed teenagers, killing Edwards.

Earlier this year in Dallas, a contentious battle over whether to expand the powers of the city’s Citizens Police Review Board pitted social justice activists—who were in favor of overhauling what had long been a toothless group—against police associations, who bristled at the idea of the review board having more power to review use-of-force incidents. A far-right group called “Citizens Matter” questioned the existence of racially biased policing and circulated a petition calling to abolish the board entirely. The Dallas City Council ultimately voted to expand the board’s powers in April.

It remains unclear what will happen to the officers identified in the Plain View Project’s database. There have been a few examples across the country of police officers being disciplined for social media activity. A police officer in Charleston, South Carolina, was fired in 2015 after a Facebook photo surfaced showing him posing in a pair of Confederate flag-themed underwear (he later settled a wrongful termination lawsuit against the city). A Chicago police officer was reprimanded last year for making a series of insensitive Facebook posts, but was not fired. Officers in Florida, Michigan, Georgia, Missouri, Mississippi, New Jersey, and Wisconsin have been fired in recent years for making racist social media posts. Ten Philadelphia police officers identified in the Plain View Project’s database were placed on desk duty earlier this week, pending the outcome of an investigation into their posts.

In Texas, at least three law enforcement officers have been fired for social media outbursts. Back in 2014, a Matagorda Sheriff’s deputy and a Bay City police officer were accused of posting racist comments toward black women in a Facebook discussion about the white officer who killed Michael Brown in Ferguson, Missouri, according to the Victoria Advocate. “Your level of ignorance and lack of common sense is deafening,” then-Matagorda deputy Sgt. Robert Heckler told the women, adding that the women should find a brick wall to bang their heads against. “You three… are a disgrace to society, your race, your jobs, your country.” Though an internal investigation later cleared Heckler of making racist or threatening posts, he was fired for violating the sheriff’s department’s policies and core objectives. Former Bay City police officer Maria Guajardo allegedly posted a racist, threatening meme in the same Facebook thread—she, too, was cleared of the allegations, but was ultimately fired for insubordination. Earlier this year, Harris County sheriff’s detective James Thomas was fired for making racist posts on a Facebook group page called “White Privilege Club,” according to the Houston Chronicle.

According to the Dallas Morning News, the Dallas Police department’s social media policy prohibits employees from making posts that “ridicule, malign, disparage or otherwise express bias toward any individual or group,” and employees are also prohibited from social media commentary that “maligns, embarrasses or causes disrepute to the department.” A Dallas Police Department spokesperson told BuzzFeed News that they were reviewing at least one officer’s racist posts. Meanwhile, Denison city manager Judson Rex told the Associated Press that the city “does not condone racism or hate of any kind, on or off the job” and will discipline officers “if needed.”