Today, we’re continuing our “Get to Know a Swing District” series with a look at Texas’s Twenty-second Congressional District. 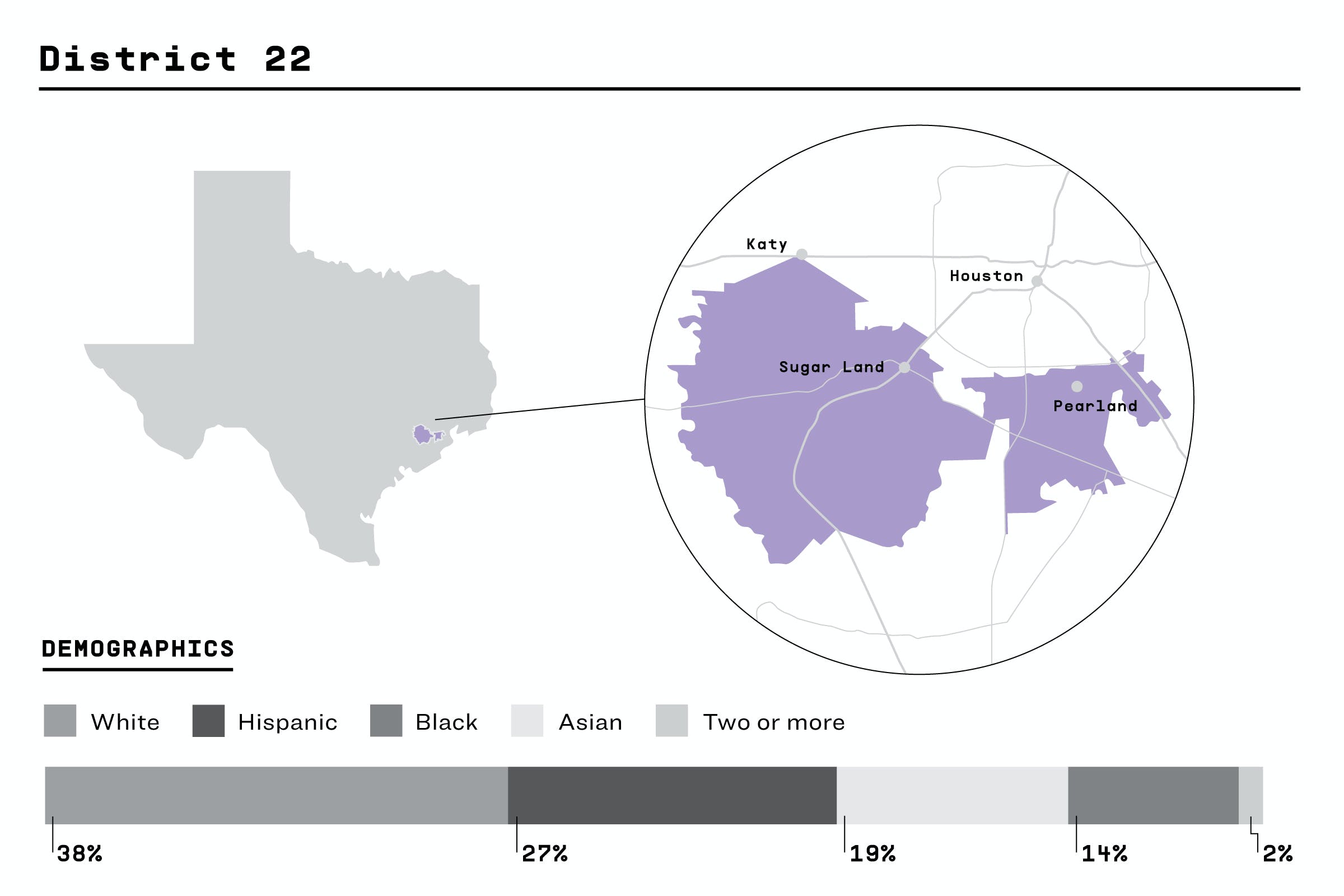 Texas’s Twenty-second Congressional District, like many in the state, began its life as a Democratic stronghold. Houston Democrat Bob Casey was the first representative elected to the seat back in 1958. After winning reelection nine times, he resigned in the mid-seventies to become a member of the Federal Maritime Commission, and the seat was captured in a special election by an eccentric 41-year-old libertarian Republican named Ron Paul. He served one term, lost his reelection campaign, and then reclaimed the seat two years later—which he held until 1985 when he stepped down to run for the U.S. Senate and later (three times) for the White House. His successor was an equally colorful member of the Texas GOP: former exterminator and eventual U.S. House majority leader (and Dancing With the Stars contestant) Tom DeLay.

In 2005, DeLay was indicted on charges related to the Jack Abramoff campaign finance scandal. He nonetheless successfully navigated a GOP primary, but when one of his key aides pleaded guilty to related charges, he withdrew from the election, leaving the seat open for a Democrat win. By 2008, the seat was back in GOP hands, held by Pete Olson. From 2010 to 2016, Olson beat his Democratic challengers by margins ranging from 19 to 38 points. In 2018, however, his margin of victory was cut to five points, turning the district into a top target for Democrats.

A big blob covering much of Fort Bend County, holding hands with a smaller blob covering the area south of the Houston beltway. The district is relatively compact—you can get across it in just an hour when traffic is light—especially compared with some of the behemoth districts in Texas that stretch for hundreds of miles. Spanning Pearland, Missouri City, and Sugar Land, the district is one of the fastest-growing in the country: since 2000, Fort Bend County has more than doubled in population, bringing demographic changes that have transformed the Twenty-second politically. 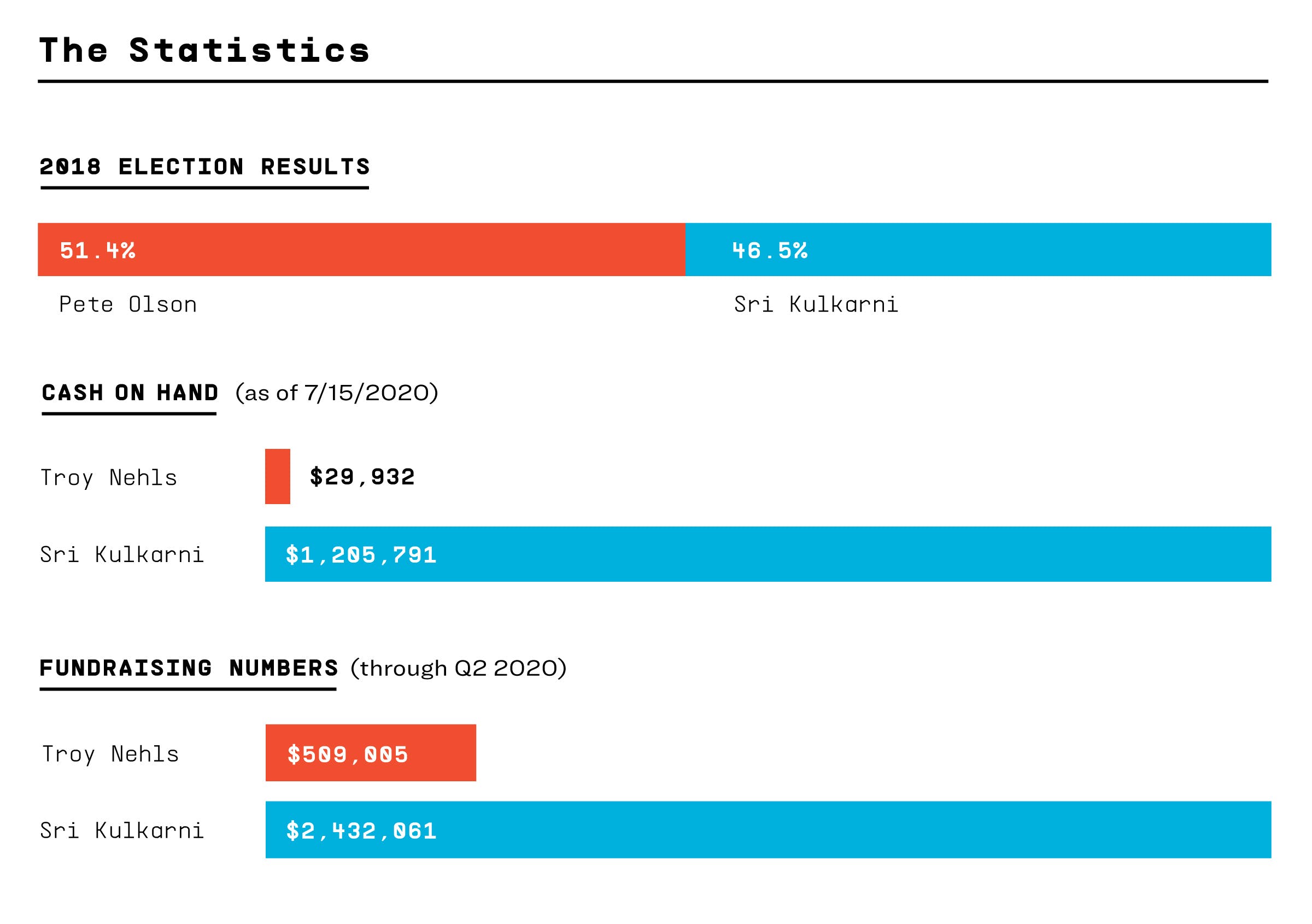 After Olson announced his retirement in 2019 amid the district’s changing political fortunes, Fort Bend County sheriff and Iraq War veteran Nehls easily traversed an ugly primary runoff against reclusive GOP donor and prolific ad-buyer Kathaleen Wall, winning the GOP nomination by forty points. Nehls is neither new to Fort Bend voters—before serving as sheriff he was elected constable in 2004—nor new to the idea of seeking higher office. In 2018, he formed an exploratory committee as he considered challenging Olson.

During this year’s primary, Nehls’s website declared that the sheriff would “stand with President Trump to defeat the socialist Democrats, build the wall, drain the swamp, and deliver on pro-economy and pro-America policies.” But his approach in the general is to position himself as a moderate, in quiet acknowledgement of the president’s high unfavorable ratings in much of suburban Texas. The “Standing with President Trump” page on Nehls’s website was removed two days after he claimed the nomination. His campaign now stresses other priorities, including protecting energy jobs and criminal justice reform. His health-care platform—with its focus on ensuring coverage for those with preexisting conditions, protecting Medicaid and Medicare, and maintaining private insurance—sounds remarkably similar to Obamacare.

In 2017, Sri Preston Kulkarni left his career in the U.S. foreign service to run for Congress. In 2018, he came within 14,000 votes of Olson, and announced the following April that he’d be seeking a rematch. This March, he cruised to the nomination without a primary runoff.

Kulkarni’s platform isn’t wildly different from his opponent’s on many issues. He’s more specific on police accountability—calling for banning chokeholds at the federal level and ending immunity for police from civil suits—and he supports universal background checks for gun purchases and “red flag” laws, which allow police to temporarily take away guns from those deemed dangerous by a judge. But otherwise, he’s positioned as a moderate Democrat who seeks to protect Medicare, Medicaid, and Social Security, and strengthen the Affordable Care Act’s provisions around preexisting conditions. His energy policy platform focuses on expanding renewables and addressing climate change, but he stops short of endorsing the Green New Deal.

The first politician listed among his endorsements? Moderate Minnesotan Amy Klobuchar. Kulkarni has been a fund-raising juggernaut, amassing more than $2.4 million through the end of June 2020, with half of that total available as cash on hand.

Texas’s Twenty-second has become one of the most diverse districts in the country over the past ten years. According to U.S. Census data, Fort Bend County was 50 percent white in 2010. By 2019, that number had fallen to 31 percent, according to estimates from the bureau. Largely because of increasing diversity, Texas suburbs, generally, are trending bluer than they have for the past generation.

In 2018, Kulkarni ran well against a popular incumbent. There isn’t a great deal of polling on the district for this year, but the most recent nonpartisan poll, conducted in late July and early August, has the race at a dead heat, with each candidate at 39 percent and a wide swath of undecided voters left to persuade. Given Kulkarni’s funding advantage, and the outsized impact that advertising can play in closer local races compared with national campaigns, this is the sort of seat that Texas Democrats are set up to pick off in this campaign cycle.

GOP internal polling from July paints a different picture—one in which Nehls, a familiar and well-liked longtime elected official, was winning by twelve points. Internal polls are generally unreliable, as are polls conducted earlier in the summer.

The Cook Political Report’s Partisan Voter Index, which tracks the general partisan leaning of each district, has TX-22 as a district with a ten-point GOP tilt. Trumpism might be a tainted brand in Fort Bend and other similar counties right now, but Nehls isn’t running as a Trump Republican anymore. If voters find his platform and kinder, gentler persona appealing, it’s not hard to imagine why Republican-leaning suburban Texans might come home to the GOP in this race.

This race is a true toss-up—the kind where a district’s overall history butts up against its changing demographics, its usual partisan tilt leans into political headwinds, and a candidate with high name ID (if not quite incumbency) squares off with a qualified and well-funded challenger. If election night is good for Texas Democrats overall, it’s quite likely to be a good night for Kulkarni—but he’s also one of a handful of Democrats in the state who could win a seat even if the larger statewide trends don’t include any major surprises.