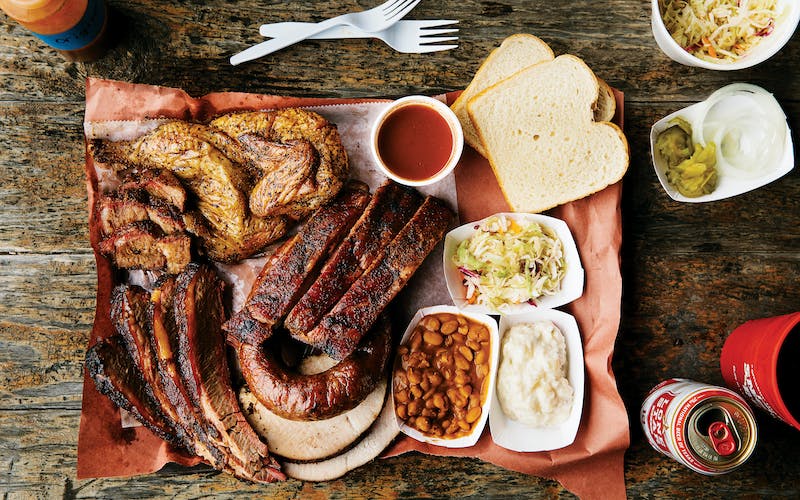 When it opened eighteen years ago, Snow’s was a secret known mainly to hardy locals who rose early on Saturdays to attend the weekly cattle auction in the Central Texas town of Lexington (population 1,200). Those peaceful days came to an abrupt halt in 2008, when this magazine ranked the tiny, rustic place number one on our Top 50 list. The renown that followed sparked 45-minute waits in line—just ask “Joe from Wisconsin”—and turned Snow’s expert pitmaster Tootsie Tomanetz into a barbecue celebrity. Her grandmotherly face drew national media coverage, and in 2013 and 2017, Snow’s made our top two again. But it wasn’t until 2020, when the Netflix series Chef ’s Table: BBQ aired a moving and beautifully shot tribute, that Snow’s fame truly went global. Now barbecue hounds hailing from Guatemala to Kenya sleep in lawn chairs under the property’s trees on Friday nights to be first in line the next morning. If they’re lucky, they might get to snap a picture with Tomanetz, skilled co-pitmaster Clay Cowgill, or affable owners Kerry and Kim Bexley. Those devotees are rewarded with smoked meats as good as any in the country, along with a traditional lineup of sides and banana pudding for dessert. So why, then, has Snow’s slipped a few spots down on our list? For the same reason Franklin has: as much as we love the place, the Texas barbecue game has changed profoundly. And that’s not a bad thing at all.