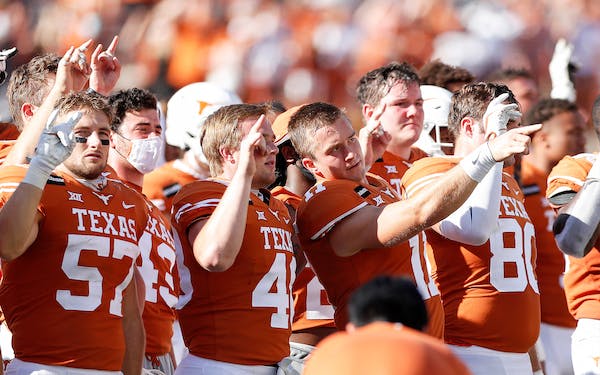 Can the Texas Longhorns Still Be a National Football Powerhouse?

The Longhorns' disappointing 6–3 season closes against Colorado in tonight's Alamo Bowl; but is the program's future any brighter? 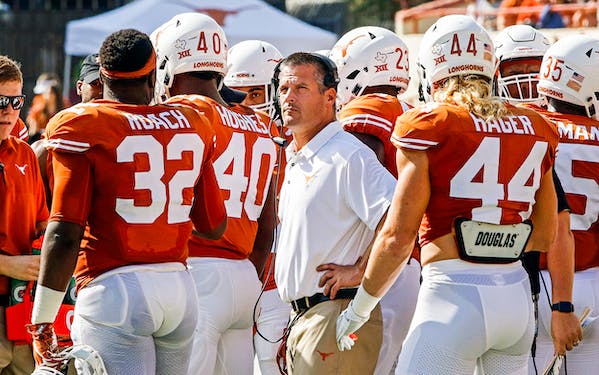 A college football analyst explains why his model shows it's going to be a great season for UT. 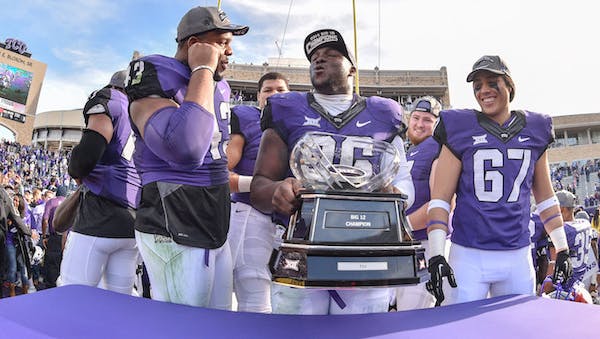 Why Aren’t TCU and Baylor in the College Football Playoff?

Texas teams—and the Big 12—aren’t going to be competing for a National Championship. 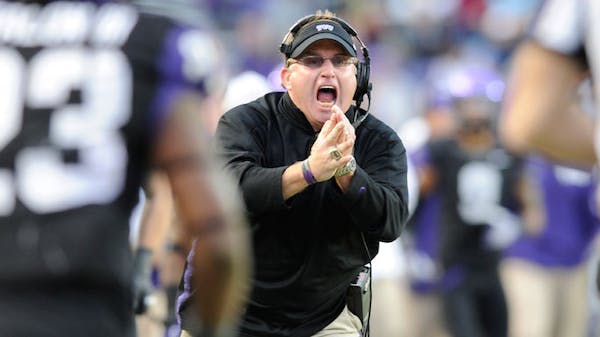 BEARS AND FROGS, OH MY!

Seven reasons why the TCU-Baylor rivalry is the state's best. 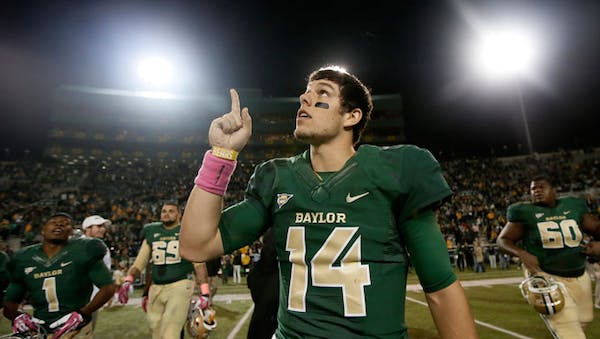 The State’s Next Heisman Winner?

A conversation with quarterback Bryce Petty of the defending Big 12 champion Baylor Bears. 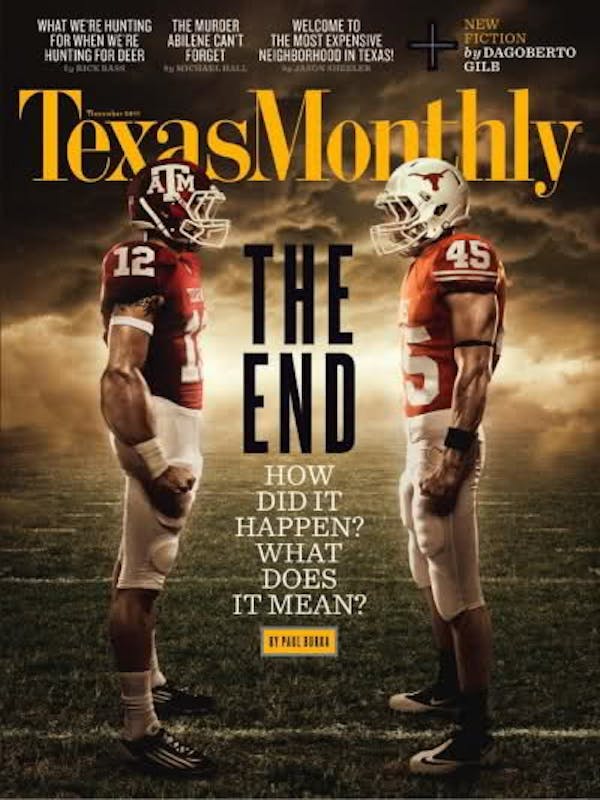 Would new Longhorns AD Steve Patterson be willing to revive the rivalry? College Station says it's in no hurry. 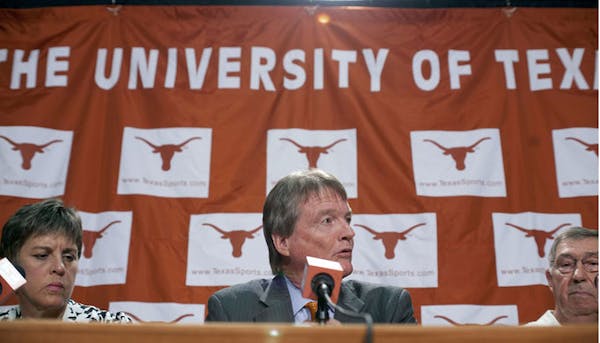 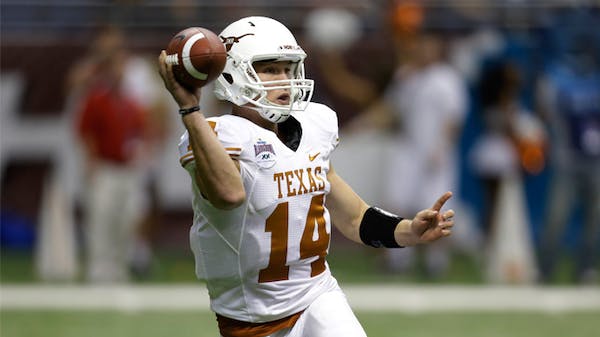 A&M Will Make It Two Straight Over ‘Bama, But Could UT Have the Better Season? 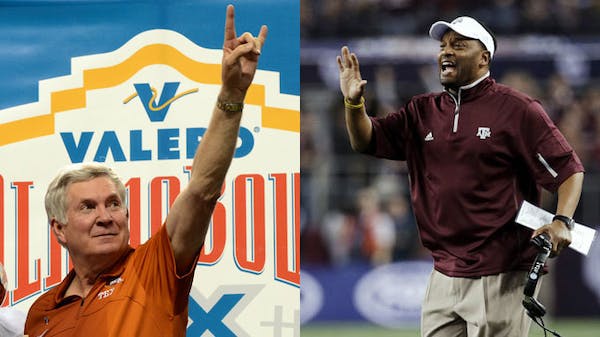 No Fooling? The Longhorns and the Aggies have signed a ten-year deal with ESPN's SEC Network and the Longhorn Network to play football once again. 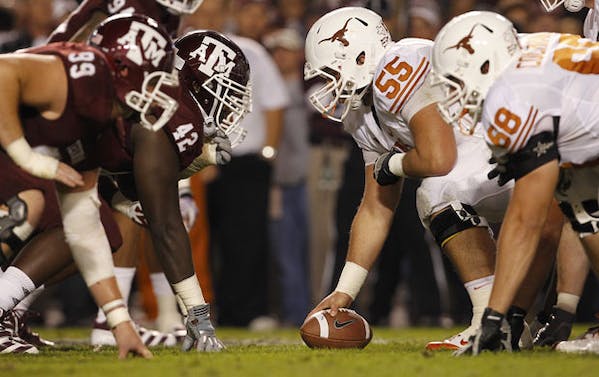 The Aggie Butterfly Effect: What if A&M Had Stayed?

Does Texas A&M’s Cotton Bowl dominance of Oklahoma mean the Aggies would have had an even better season had they stayed in the Big 12? No. 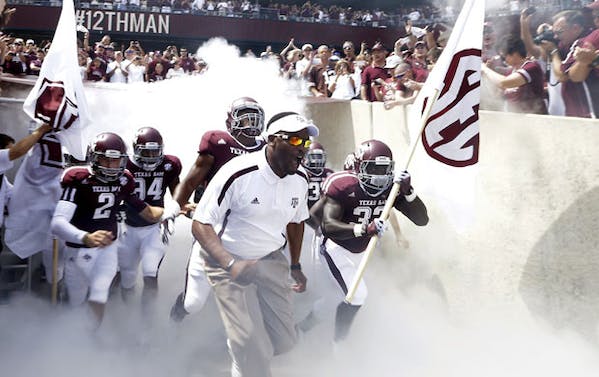 Anybody (including many Aggies) who said they expected Texas A&M's first season in the Southeastern Conference to go so well is lying. But it's still funny to look back at all the naysayers. 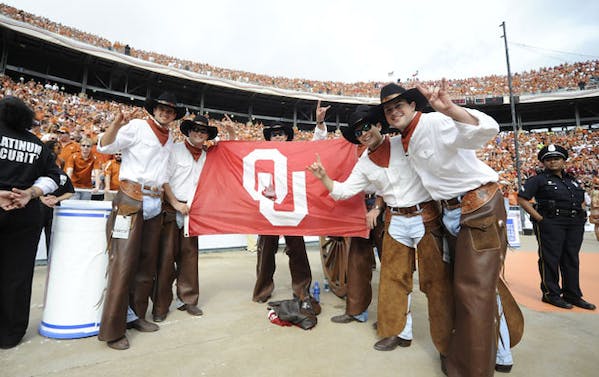 Friday's Cotton Bowl gives Longhorns fans a chance to decide which team they hate more: the University of Oklahoma, or Texas A&M. 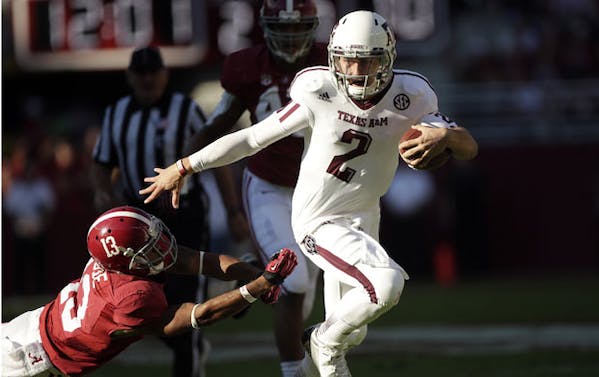 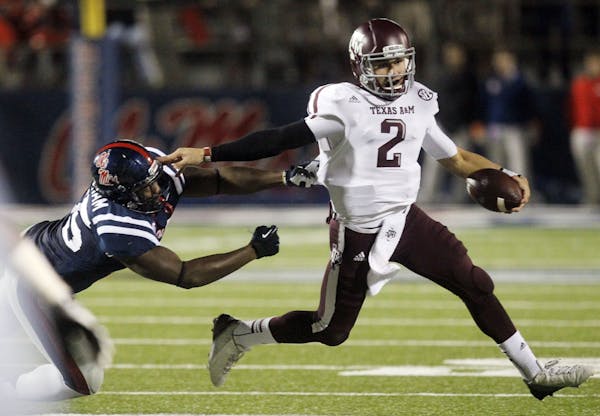 Aggies Up, Longhorns Down?

UT may still have the better team, but Texas A&M is doing better than expected in the SEC. 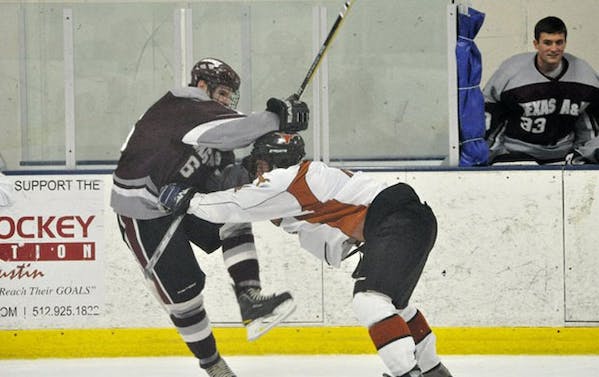 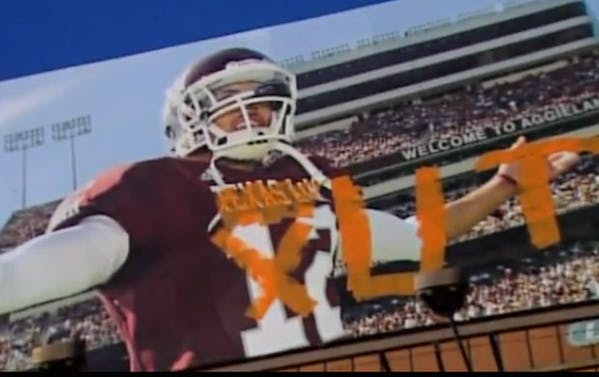 A&M Billboard Near Austin Gets a UT Makeover

The rivalry continues off the field: A "This is SEC Country" billboard in North Austin was defaced with University of Texas colors over the weekend. 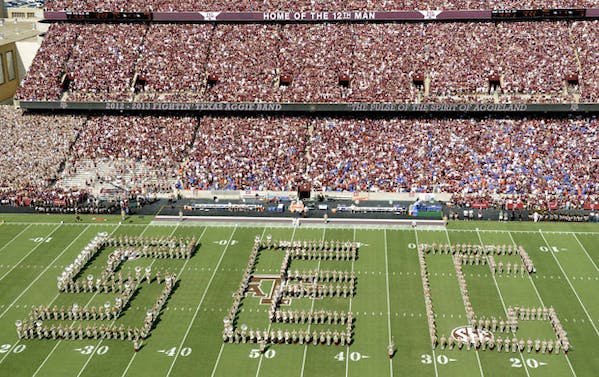 The universities both lost big games, but they celebrated new football eras. 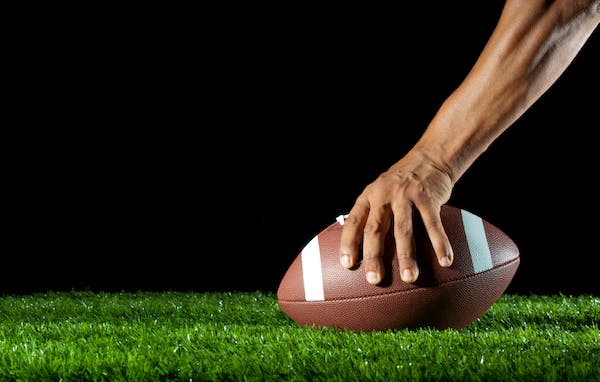 Rumor has it that UT, Texas Tech, and TCU fans might end up seeing Florida State on the Big 12 conference schedule. 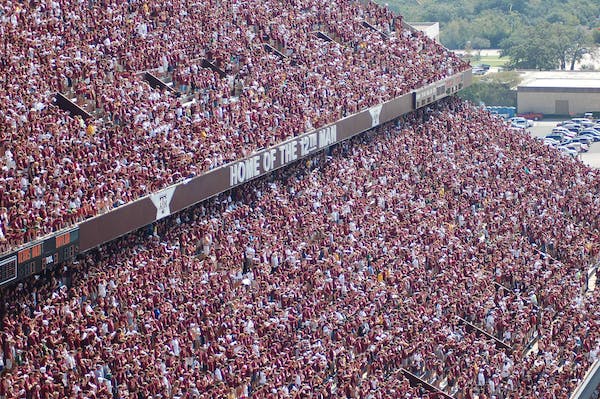 SEC to Aggie Band and Other Students: Seat’s Taken

I’ll give the new conference a fifty-fifty chance of lasting four years. 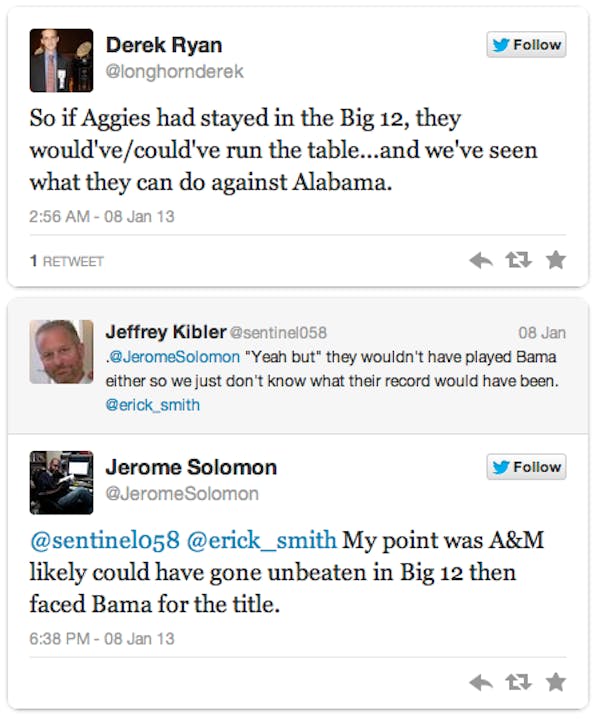 The Aggie Butterfly Effect: What if A&M Had Stayed?

Does Texas A&M’s Cotton Bowl dominance of Oklahoma mean the Aggies would have had an even better season had they stayed in the Big 12? No.

Anybody (including many Aggies) who said they expected Texas A&M's first season in the Southeastern Conference to go so well is lying. But it's still funny to look back at all the naysayers.

Friday's Cotton Bowl gives Longhorns fans a chance to decide which team they hate more: the University of Oklahoma, or Texas A&M. 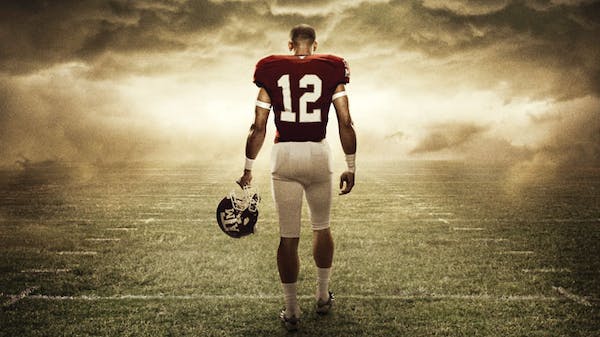 Texas A&M’s announcement that it was bolting the Big 12 for the SEC signaled the end of a passionate rivalry with the University of Texas that has defined the two schools for more than a century. But what does the end of Aggies versus Longhorns mean for the rest of us? 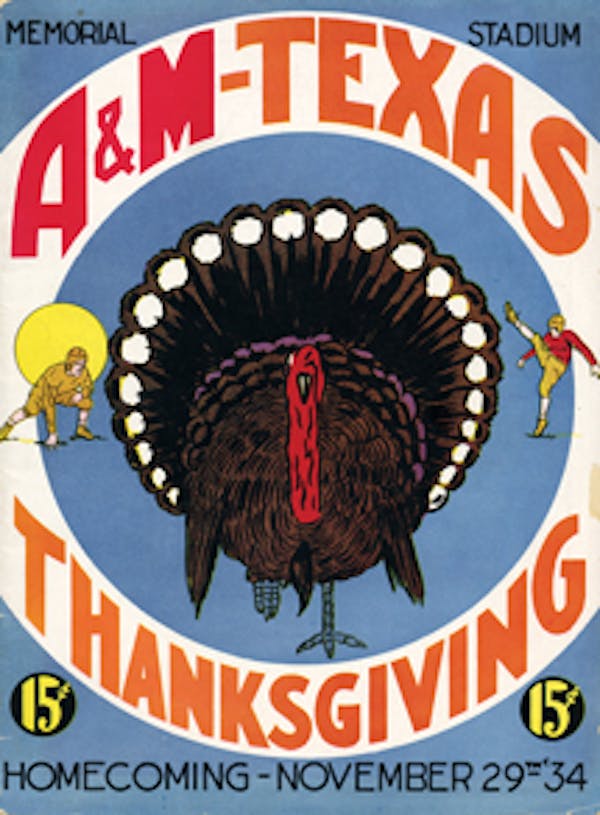 Later this month, one of the great long-standing traditions in college athletics—the annual Thanksgiving game between the University of Texas and Texas A&M—will come to an end. The rivalry between these two schools has lasted so long, and fostered such ferocious passion on both sides, that most people… 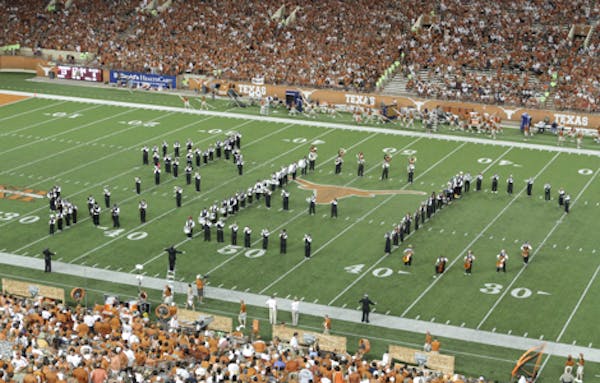 Mark his words: Cuban on the Big XII

Mavericks' owner Mark Cuban has a very smart blog on what the Big Twelve should do if A&M leaves. It was published several days ago and has been picked up by other sports blogs. * * * * Here is some unsolicited advice to the Big 12. As you might expect coming from me, it’s going to be contrary to what everyone else thinks they should do. With Texas A&M trying to leave the Big 12 (It doesn’t happen until the SEC accepts them) every remaining school is trying to decide in the immortal lyrics of The Clash “Should I Stay or Should I Go”.  The quick answer ? They should stay. Why ? The first reason is that the Super Conferences that are forming or being considered will turn into a huge mistake. No if ands or buts about it. While the concept of a Super Conference sounds incredibly cool , the reality is that the larger than 12 school conferences will only invoke the law of intended consequences and will create the following problems: 1. More schools will NOT mean more TV money. The big college TV networks, Fox, ESPN, CBS pay for quality, not quantity.  They need marquee matchups that are “Must Tweet TV”.  The number of schools in a conference actually reduce the parity and quality of match-ups in a conference. The networks will not pay up for that.  Adding Texas A&M to the SEC is not going to add a single dollar’s worth of value to the owner of the SEC TV contract , regardless of sport.  Maybe the SEC has an escalator in their contract that increases the total value of the TV contract, but I’m guessing that it still will result in a reduction in the dollars paid to each school when compared to the amount paid had an additional school not joined the conference. 2. Fans will hate the scheduling impact You know how there is midnight madness in college basketball ? And late night and games scheduled at weird times for basketball ? Get ready for morning madness in college football as well.  I’m guessing that the only way to get all those games through a single TV network partner is to start very, very early or to go very very late. OR to move games to online broadcasts.  Which is exactly why the big networks are very supportive of the Super Conferences. They know they will be able to force matchups OFF of tv and on to internet based broadcasts. You can pass your own judgement if that’s good or bad. 3. Say Goodbye to Cupcake Football Games As a big college football fan I see this as a positive. But if you talk to any coach with BCS aspirations, they will tell you that this is a huge negative. Sure Utah State can take Auburn to the wire every now and then, but the reality is most BCS title aspiration (not all) schools have 3 or 4 cupcake games on their schedule. With every school added to a conference they are going to have to remove a cupcake to make room on their schedule. Coaches are going to HATE this. Of course the smaller schools are going to lose their pay day as well. 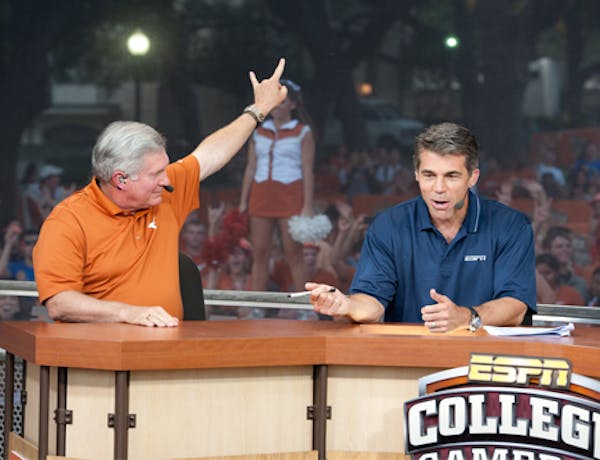 The Eyes of Texas Aren’t Upon It

As questions swirl about the future of UT and the Big 12, the Longhorn Network is now on the air. Sort of.