Hayden Arthur and Wendy Demarest had driven two hours east from Truth or Consequences, New Mexico, last spring with their GPS pointed firmly towards El Paso’s Glasbox, a converted warehouse space that opened about three years ago that’s still more “warehouse” than “converted.” Traveling great distances for a concert isn’t unusual in this part of the country, and the twentysomething couple keep a close watch on the whereabouts of their favorite area band, the Genders. It was time for a trip to El Paso—Arthur and Demarest make it a few times a year, for either touring acts or homegrown bands, though they like the locals better. “The energy is better with the locals,” Arthur said. “There’s a lot of talent hidden here.”

Their assessment doesn’t necessarily match El Paso’s reputation on the national scene in recent years. Though the indie rock band At the Drive-In burst into the mainstream in the late nineties, grabbing hold of the media spotlight and inspiring a host of emo bands in its wake, the bright moment quickly faded: the band broke up, its most prominent members moved to L.A., indie rock clubs like Moontime Pizza closed, and national attention shifted elsewhere. By the mid-aughts, people stopped looking to see if El Paso might somehow be home to the next big thing. But locals sense a revitalization in progress. Last year, with the breakthrough of teenage R&B sensation Khalid—an Army brat who splits his time between there and Los Angeles—the talent that’s always bubbled under the surface in El Paso showed it may be on the verge of erupting.

Unearthing that talent is the mission of the new Glasbox series Rotating Sets, the brainchild of Justin J. Leeah, a producer and engineer who owns Sound+Vision Studios in downtown El Paso with his wife, Jennifer Burton. In the nineteen years Leeah spent working in the local music community—first at the region’s legendary Sonic Ranch studio recording bands like Conor Oberst and the Yeah Yeah Yeahs and later working with locals at his own space, which currently operates out of Glasbox—he saw an opportunity to put on a showcase that highlighted El Paso talent in a way that made each concert feel like an event. “I have a pretty good track record in the studio, and I have a connection with these bands,” Leeah said from behind the soundboard at Glasbox. “I felt like I needed to get out of the studio and work with the bands in their own element instead of having them come to mine.”

Tonight, Leeah was focused on the Genders. A little before 11 p.m., about 35 people who’d been milling around, helping themselves to the cooler of cheap beer and a table full of snacks, sat back in the folding chairs. They began watching the performance as the Genders, who wore its post-punk influences (the Cure, the Smiths) on its sleeve, set the mood. While the guitarist offered heavy washes of reverb-soaked guitar, lead singer Mona Gender, clad in black, began stalking the stage, singing into a vintage microphone lines like “All I want / is to hold you forever / in this moment” in a fake (but impassioned) British accent. After about a handful of songs, she invited the audience to stand up, and Arthur and Demarest immediately seized the opportunity to dance—they didn’t drive two hours to El Paso to see their favorite local band sitting down, after all.

The series, which began in January, has included singer-songwriter Omar Cuellar and alt-country band Dusty Low. (A jazz band called Speak No Evil was booked two months later.) That variety is at the core of what Leeah is doing with the series. “I think music in El Paso is diverse because the population is diverse,” he said. “There really isn’t a defined El Paso sound, so if I were only focusing on one genre, I would run out of bands to record pretty quickly.” He suspects that there might be a trend in artists who are “trying to ride the Khalid wave,” just like the late nineties saw indie rock bands ape At the Drive-In, but a superstar here or there doesn’t define the music of El Paso.

Watching the show from seats near the back of the room, El Paso locals Tavo Vielma and Jackie Ponce nodded along. This was the pair’s first time at Rotating Sets, but they’d been aware of it since it had launched, noting the wide assortment of genres. Outside of Glasbox, they usually attend concerts at dedicated music venues like Tricky Falls and Lowbrow Palace, even the El Paso County Coliseum if there’s a big enough band playing that they actually like. “We listen to everything but country,” Vielma said. “These days, there’s always a show to go to.”

Listen to The Genders’s “Mourning Heartbeats”: 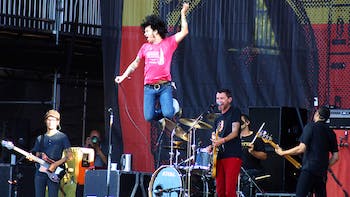 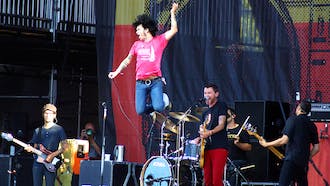