Since 2012, Eric Sollenberger has been building a massive media presence as the pseudonymous, satirical sports personality “PFT Commenter.” Until a mention in an article published on Deadspin on Tuesday, Sollenberger enjoyed anonymity, in his own writing and in online stories about PFT Commenter. But after a recent glowing profile of his persona, Deadspin writer Laura Wagner wrote a story including his real name—which Sollenberger took as doxxing.

The idea behind his act is straightforward: the comments section of NBC’s NFL blog, Pro Football Talk, has a reputation for cultivating a reactionary community that Sollenberger deemed a “cesspool.” He created the PFT Commenter personality to mimic the tone of the site’s worst users, complete with spelling errors, bizarre punctuation, and political takes on football news that have nothing to do with the gridiron. (Here’s a sample from a 2015 column he wrote for SBNation: “Coach Bill Belichick was the most irritated Ive ever seen him last week as reporters hammered him about DeflateGate. Hell if Bill wanted to press to start ignoring Patriots he should of just held his press conference from Benghazi, folks.”) He wrote as PFT Commenter for SBNation for three years, living in Austin for part of that time and writing a weekly column under his own name about University of Texas at Austin football for the Austin Chronicle. But after moving from more traditional sports media outlets to join Barstool Sports, a site whose leaders publicly make misogynistic comments and foster a no-girls-allowed culture (its slogan is “Saturdays are for the boys”), the point of Sollenberger’s act is harder to understand.

Sollenberger’s jump to Barstool, in 2016, was jarring; his PFT Commenter persona mocked the reactionary, sexist, and racist views of sports fans online, while Barstool cultivated an audience that unironically held those perspectives. That caught up with Sollenberger last fall, when ESPN canceled a weekly series starring Sollenberger and Dan “Big Cat” Katz, another of Barstool’s flagship personalities, after current ESPN host and former Longhorn Network reporter Samantha Ponder revealed the history of misogynistic statements from the website’s leadership, including a rant from Barstool President Dave Portnoy in which he called Ponder a “slut.”

Throughout the controversy, Sollenberger managed to maintain distance from the site’s leadership and readers. He was able to build out his satirical persona and received glowing profiles at outlets like Rolling Stone and Awful Announcing, which followed Sollenberger’s request to not use his name.

On Monday, the Washington Post followed the trend, publishing a profile of Sollenberger that granted him anonymity—unusual, for a major newspaper when writing a friendly profile of a prominent personality. In response to a request for comment from Texas Monthly, Washington Post deputy sports editor Matt Rennie wrote in an email: “Once we had verified the subject’s actual identity, we were comfortable agreeing not to use it in the piece, under the thinking that he was a performer and this was his performance identity.” Writer Rick Maese also didn’t press “PFT,” as the story refers to him, about whether Barstool’s sexism and history of harassment are central to its identity. “All I’d heard was a lot of the negative side,” Sollenberger told the paper when asked. “That’s what the Internet had put out there. People that weren’t in the Barstool universe, that’s the impression they had of the company. I checked the company out, read their blogs. I think they are one of the most hilarious collective groups of people writing right now.” The piece lets Sollenberger off the hook there.

The Post wasn’t profiling the character of “PFT Commenter,” though—it was profiling Sollenberger. Treating him as a performer on a neutral platform—as opposed to a platform that the Post acknowledges “others might have considered juvenile, sexist and mean-spirited,” and where it posits that Sollenberger serves as something of a conscience—ignores a valid question: Who is this anonymous guy who both benefits from and satirizes the misogynistic culture of online sports fandom?

Deadspin‘s Laura Wagner, who has received harassment from Portnoy, wrote a piece criticizing how media outlets have granted anonymity to Sollenberger, despite no discernible threat to him if they did. Wagner argues that the Washington Post published a glowing profile of Sollenberger that allowed him to dodge accountability for his employer’s actions by relying on a pseudonym.

On Deadspin, Wagner published Sollenberger’s name, and challenged both the paper’s decision to grant him anonymity and Sollenberger’s explanation for why he sought it (“the joke is funnier when he’s anonymous,” she says he told her). In her estimation, Sollenberger is trying to distance himself from the behavior of his Barstool colleagues by ensuring that only his pseudonymous alter ego is actually affiliated with them.

Whatever Sollenberger’s motivation, he’s no longer anonymous (although it’s worth noting that his anonymity has been limited for some time—anyone could search Twitter or various sports message boards to find it). Following Deadspin‘s post, Sollenberger took to Barstool to drop the facade, claiming again that “I just think it’s funnier if people didn’t know my real identity”, and that Wagner had “doxxed” him.

The question of whether what happened to Sollenberger qualifies as “doxxing” is worth exploring. The online term, which is a play on “docs,” or revealing documentation about a person, typically carries sinister implications. To be doxxed is to be put at risk, and to have identifying information necessary for privacy revealed maliciously. Wagner’s post didn’t place Sollenberger at any real risk—his colleagues at Barstool publish under their own names without threat, and she didn’t publish other information that could lead any reader with a grudge to track him down. The only real loss is in how he views the integrity of the joke. At best, “PFT Commenter” is a performance piece, and Sollenberger, like artist Banksy or novelist Elena Ferrante, deserved to have the performance respected. But Banksy and Ferrante make trade-offs to keep their real identities private. Banksy preserves his anonymity by producing his work in secret, while Ferrante is unable to make public appearances. Sollenberger, on the other hand, had it both ways: He hosted a TV show, drops in on SportsCenter, appears on panels, and poses for selfies with fans. He does all of this while building his audience within a media network whose leaders engage in the exact sort of behavior that the “PFT Commenter” character was created to mock. This way, he gets to reach the audience of Barstool Sports, while avoiding association with its distasteful elements.

Sollenberger is entitled to his preference regarding whether his real name is connected to his media personality. But it’s hard to make an argument that Wagner owes it to him to respect that preference. The real question isn’t whether reporting the real name of a public figure is unethical doxxing—if it is, then journalism is in big trouble—but why a paper like the Washington Post would grant it to him in the first place. 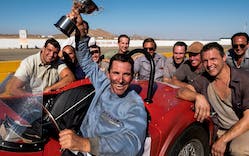 ‘Ford v Ferrari’ Is the Imperfect Racing Movie for Our Times