Wednesday’s episode of Waco proved that creators Drew and Erick Dowdle are up to the challenge of serialized television. After last week’s initial shoot-out was depicted so dramatically, now comes the 51 days of the siege—the point when everyone dug their heels so deep into the Texas prairie dirt that there was no going back. In its first three episodes, Waco has done an excellent job of conveying to its audience how the Bureau of Alcohol, Tobacco, Firearms, and Explosives; the FBI; and the Branch Davidians found themselves in such a dire situation—and now they’re tasked with making us understand how the turmoil could have lasted so long.

Partly, it’s because everyone seems to be playing with a different deck. Mitch Decker and the FBI tactical team think they can scare the Branch Davidians out. Gary Noesner and the FBI negotiation team think they can talk them out. And the Branch Davidians have the one thing the FBI has no method for countering: faith that this is all part of David Koresh’s prophecy. The series smartly relays the fundamental deadlock between the Branch Davidian’s beliefs and the FBI’s negotiation tactics not through each party’s most polarizing characters, but through their most reasonable middlemen: Koresh’s right-hand man, Steve Schneider, and the even-keeled Noesner.

Throughout Wednesday’s episode, which often draws directly from real conversations between Schneider and FBI negotiators, the Branch Davidian reveals himself to be thoughtful and rational foil to Koresh. And yet, Schneider believes Koresh’s prophecies. This hour functions as a sort of character study of Schneider—his prolonged, but varied inner turmoil expertly interpreted by Paul Sparks—a man who seems far too rational to fall victim to a “cult.” But it is within that very definition that the FBI misunderstands Schneider and the Davidians. We hear again from the Dallas radio DJ we met last week, interviewing Dr. James Tabor, a real-life scholar of emergent religion who worked with the FBI during the siege. When the Branch Davidians are referred to as a cult, Tabor proposes that there’s no such thing: “Cult is a judgment word used to talk about somebody else’s tightly knit religious group. Nobody in the world belongs to what they think of as a cult.”

The Branch Davidians, though wounded and hungry and scared, believe that there is no better proof that Koresh is the Lamb of God than the ATF militia showing up at Mount Carmel’s doorstep; this was his longest told prophecy coming true, and they’re still willing to stick up for their leader. Noesner, however, thinks that since Koresh is already dying from a bullet wound, he doesn’t care if his followers go down with him. Schneider tells him that’s where he’s got it all wrong. “The thing you’re missing is that this is real,” he says. “For years, David has been prophesying exactly what is happening here, from the way you came in, the tanks, the soldiers, everything. I can’t figure out another explanation that makes any sense for a minor weapons violation.”

Noesner correctly perceives, though, that Schneider feels a responsibility for the well-being of the people inside Mount Carmel that Koresh does not. Due to the stress, the nursing mothers inside the compound have stopped lactating, and they need milk for their babies. Noesner tells Schneider on the phone that he can get them the milk, but they have to send some of the children out in return. Overhearing the terms from his bloody pallet on the floor, Koresh jumps on the line: “How much we taking here, Gary—two quarts per kid, three?” he sneers before hanging up.

Despite the rapport between Schneider and Noesner, neither of the Branch Davidians trust the FBI. Why would they when the FBI agents on the tanks outside are mooning them and flipping them off (by all accounts, a real thing that happened throughout the siege)? So, as we saw him do at Ruby Ridge in the premiere, Noesner gets someone they do trust to help: Sheriff Hartwell. On the phone, Hartwell tells Koresh, “It might not be the worst thing to get the babies fed and at the same time get some of your other kids out of harm’s way.”

Koresh finally relents, but Noesner’s FBI commander doesn’t like that they’re making it “so easy on them.” Noesner suggests bugging the milk bin as a way to get a tactical advantage while also creating goodwill—finally, a playing card they can all get behind. Even the Branch Davidians are a bit relieved to be sending some of their children out, especially Schneider, who’s able to convince Judy—his wife, who we learned in previous episodes had Koresh’s baby—to leave, child in tow, in order to get medical attention for her wounded hand. Koresh, though, catches wind of Judy’s leaving and says no. Schneider finally explodes: “In all the years I’ve known you everything I’ve done has been for you! Please, David, I’m asking you this one thing. I’ll talk to Judy she can just tell them that Minna is my daughter.” Koresh looks him the eye and says, “Steve, she’s not your daughter. She’s mine.”

So, Judy stays and Schneider dutifully walks outside to retrieve the milk alongside the children headed out to relative safety. Noesner asks to speak to him privately for a moment. Noesner tells Schneider that the longer these situations extend, the more erratic and dangerous people become. He asks him whose child Minna is (Noesner already knew the truth). He asks him why Judy isn’t coming outside despite her injury. “Because we made a decision together,” Schneider tells him. But Noesner, trying to drive a wedge between Schneider and Koresh, replies that it’s time to make “decisions for you, for Judy, for Minna; for everyone in there who’s waiting for someone to find the courage to lead them out.”

At the top of the episode, we heard Koresh explain to his congregants why they weren’t leaving the compound as originally intended. “Know it or not, you came here to be tested,” Koresh tells the frightened crowd. “And this is a test. This is our withering. Our time to prove through suffering that we are worthy of the miracle to come.” What Noesner can’t seem to understand in his earnest attempts to meet Schneider on his level, is that the Branch Davidians already believe they’re doing the courageous thing. And to them, the most courageous decision is to stay.

Schneider heads back inside with the bugged milk, ending the mostly peaceful limbo brokered largely by Schneider and Noesner. “You’ve been letting Gary do his thing,” FBI tactical team member Mitch Decker tells their commander. “Now how about you let me do a little bit of mine?” As the Branch Davidians watch a member’s mother plead for him to come outside on the news that night, all of the electricity inside the compound suddenly shuts off. Koresh goes to the window and stares out from the darkness. Just outside the lit FBI tents, Decker glares back. 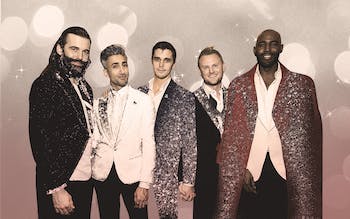