On October 2006, at a global food trade show in Paris, several representatives from the U.S. pecan industry found themselves pursuing something of a fool’s errand. They were seeking a European market for their product. The Europeans have flatly rejected the pecan since colonial times, preferring the taste of walnuts and chestnuts to that of America’s only edible native nut. But the American market, after a century of growth, had become stagnant—inventories were high and there was little new demand—and the industry, which has never managed to convince consumers to toss back pecans the way they do peanuts, was desperate for a lifeline. On a lark, a representative offered a basket of shelled pecans to a team of Chinese nut buyers. The Asians, to everyone’s surprise, were impressed. Really impressed. “We think there’s potential for tremendous growth,” a New Mexico agriculture official later told the Associated Press. This turned out to be the understatement of the decade.

In 2000 China was so unfamiliar with pecans that it didn’t have a word for them. Today it purchases nearly 100 million pounds a year, about a third of the entire United States crop. Unlike Americans, who prefer pecans in their muffins and waffles and ice cream, the Chinese crack them open and eat them straight from the shell. “The Chinese,” the Wall Street Journal reported in 2011, “want our nuts.” And they’re getting them. Thanks to the growing Chinese demand—a demand fueled by a deep faith in the nut’s nutritive power—pecan prices have shot up. In 2012 alone, pecan exports to China spiked 64 percent.

One would think that Texas pecan growers would be well positioned to cash in on this boom. After all, Texas has more land suitable for growing pecans than any other state. But taking advantage of this opportunity is not as straightforward as it seems. Texas has been comparatively slow on the uptake when it comes to meeting Chinese demand, falling behind New Mexico and Georgia in the great international pecan rush. The reasons are many, but they all originate in the fact that, before improved pecan varieties hit the scene, the Texas landscape teemed with the densest and handsomest pecan groves in botanical history. Texans take enormous pride in these groves. They are native relics of an ancient environment, sources of a frontier food that sustained early settlers, and icons so deeply associated with Texan lore that the first governor born here, James Hogg, insisted a pecan tree be planted atop his grave.

But from today’s perspective, these groves are sentimental fossils of a bygone era. A typical native tree produces far fewer nuts than an improved tree, and they are often of inconsistent quality. For a century, Texas could afford to have its pecans and eat them too, sending a combination of native and improved pecans into a modest domestic market. But now the market is largely foreign, and it wants pecans that arrive on a regular schedule and are thin of shell and uniform in size. That’s not something Texas’s native pecan trees are ever going to produce.

The pecan has grown in Texas for 65 million years, though it was not until about 16,000 years ago that it began to receive serious attention. Although the Native American inhabitants of what we now call Texas never established pecan orchards per se, evidence suggests that they dispersed pecan seeds along riverbanks and visited these sites annually, doing their best to corner the market before the squirrels arrived. A vigorous trade in pecans eventually developed among the various Indian tribes, which easily segued into exchange with European explorers. When Spaniards arrived in the sixteenth century, they encountered Indians hawking pecans from the upper Colorado River to the lower Rio Grande Valley. In 1693 Gregorio de Salinas Varona, the governor of Coahuila, wrote about being impressed by “a grove of pecan trees” as he and his party crossed the Nueces River—named, of course, for the nut trees lining its banks. Demand remained localized well into the nineteenth century, when a small trade in pecans began to connect New Orleans and San Antonio, where pecans were shelled, with St. Louis and Chicago, where they were eaten. The pecan had developed a reputation as “the aristocrat of nuts,” and it tended to be consumed as a savvy snack in upper-class parlors.

The rise of frozen-food products and the popularization of the pecan pie dramatically expanded the domestic market for pecans in the twentieth century. Texas growers pounced, exporting nuts harvested from native groves to New York, Boston, and Providence (where Yankee consumers regrettably called the “pih-kahn” a “pee-can”). As America’s native nut became America’s preferred nut, horticulturists bred trees of increased yield and uniformity. By 1940, a farmer living in a warm climate could clear a plot of land, choose an appropriate cultivar, start an orchard of cloned trees, and, eight to ten years later, harvest a bounty of same-sized nuts. In places such as New Mexico and Georgia—which had no native pecan crops of their own—the new varieties were extremely popular. Growers planted orchards as if designing city blocks, churning out millions of pounds of improved nuts.

But in Texas, pecan farmers resisted the improved pecans. Blessed with an ample native stock, they opted to stick with tradition and passively cultivate their groves, even though this meant they would reap a lesser harvest of genetic misfits—small batches of different-sized nuts with inconsistent “nut meat” quality. By 1930, there were more than 80 million native trees growing here, more than in any other state. Despite pleas from USDA agents to exclusively plant improved trees, many Texas growers stood by their native specimens, viewing pecans as an excellent low-maintenance supplement to the cattle business rather than a stand-alone industry. Few cattlemen, after all, were thrilled about trading in the title “cowboy” for “pecan farmer.” And few farmers were keen on being told how to raise a familiar crop by the federal government.

But the market didn’t make allowances for such anxieties. Throughout the twentieth century, as the food industry became more and more automated, the improved varieties, with their standard size, thinner shells, and higher yields, prevailed. They entered shelling machines with no trouble and were transformed into nut flavoring for countless processed foods. Texas, however, straddled the divide between the wild and the sown. We cultivated improved pecans for the ingredient market while reserving ample native fare for our Thanksgiving gift baskets. It was a compromise that, for a while, made sense.

Then came the Chinese.

Mike Adams, president of the Texas Pecan Board, recently spent a week in China, trying to better understand his industry’s newest and largest market. Chinese pecan importers buy mostly improved nuts, and until Adams went there himself, he didn’t fully appreciate why. Then he learned how Chinese processors make a hairline fracture in the shell (by hand), roast them, and soak them, often in a flavored brine. This process demands, as Adams explained, “uniform size and uniform variety.” Different varieties roast at different temperatures, and Chinese processors prefer to fill gas station vending machines with pecans that are all the same size. A native nut would be a stick in the spokes of the system.

Adams, who owns Royalty Pecan Farms, in Caldwell, is quick to acknowledge the challenges Texas growers face when it comes to capitalizing on the China connection. Roughly 30 percent of Texas’s harvest is composed of native nuts, and owing to climatic factors, in West Texas even the improved pecans mature later than those in Georgia, denying many Texas growers first crack at the “gift-pack market” sparked by mid-autumn festivals and the Chinese New Year. That said, Adams believes that increased production of improved nuts would raise Texas’s chances of dominating the China market. No state is in a better position to ramp up its production.

Consider some numbers. Every year Texas harvests improved pecans from about 70,000 acres of land. But unlike Georgia and New Mexico, Texas is sitting on a gold mine of more than 600,000 acres of land, all lining the state’s waterways, where native pecans thrive. If future growers cleared this land of native stock and planted field after field of improved orchards, Texas would likely leave Georgia and New Mexico behind.

Of course, there’s a catch, and Texas’s pecan growers are well aware of it. Native pecans beautify our rivers, their genetic variation fosters biodiversity, and they represent perhaps the only edible native flora of the Texan landscape to survive hundreds of years of environmental change. What a shame it would be, as Texas A&M entomologist (and global authority on pecan pests) Marvin Harris has noted, if all these trees were removed and the only place future Texans could see a native pecan tree was in a botanical garden.

Andy Sherrod, a horticulturist who manages Royalty Pecan Farms, suggests a more heartening version of this scenario. Checking up on their five-hundred-acre orchard in the Brazos river bottom, Sherrod, a thin man in worn Wranglers, proudly highlights the environmentally sustainable methods he uses. Royalty Pecan preserves water through cutting-edge slow-drip irrigation, relies on beneficial insects to control aphids, fosters native grasses to sequester carbon and aerate soil, and uses sonar devices to deter crows instead of dousing trees with buckshot. That’s fine stewardship of nature—as well as a smart way to market to Chinese consumers, who have a growing interest in agricultural sustainability—and it’s stewardship that is not incompatible with commerce.

But it’s a delicate balance, to say the least. After all, the orchard’s 14,000 trees are clumps of clones that wouldn’t thrive without Sherrod’s gentle management. As he heads down the hill from the farm’s welcome center, delving into the grid of the orchard, Sherrod stops and points to a majestic lone pecan. It’s a native holdout, a giant among dwarfs, thick and gnarled and displaying every knock and scar accumulated over its one-hundred-year history. As Sherrod, who almost looks wistful, declares his love for this noble tree, it’s hard not to notice that it looms and sways over the orchard like a big question mark.

Adapted from The Pecan: A History of America’s Native Nut, by James McWilliams. Copyright © 2013 by the University of Texas Press. To be published in October 2013. 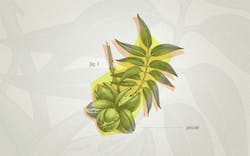 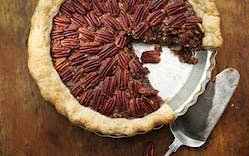