Many celebrities have a foundation that allows them to use their fame to give back. Jason Witten’s SCORE Foundation addresses the Dallas Cowboys tight end’s passion for issues around domestic violence. The Dirk Nowitzki Foundation is the vehicle through which the Dallas Mavericks star awards grants to organizations in Texas and beyond that help with education, homelessness, and domestic violence. And Matthew McConaughey’s Just Keep Living Foundation is his way of sharing his unique perspective on life with fans and children, offering after-school programs to Texas kids and bons mots of wisdom to all:

“The wisest and coolest people I know laugh the most! Ha!!
NEVER LOSE YOUR SENSE OF HUMOR.”

McConaughey’s accomplished a lot with the wisdom and catchphrases of the character he played in his breakout Dazed and Confused role 24 years ago. The actor’s foundation, of course, is named for a seminal speech he gives at the end of the film:

Anyway, the existence of j.k. livin, as McConaughey’s foundation calls itself for short, is fun. It’s exactly the way we would expect McConaughey to give back to the world—charity that doesn’t take itself too seriously. (It’s also goofy enough that a parody of it exists on Netflix’s animated sitcom Bojack Horseman.) It started as a foundation, evolved to include a lifestyle brand (that helped raise money for the foundation), and now appears to exist solely as a charity—the links on the brand’s website no longer take you to sale pages. But worry not: If you need McConaughey-branded apparel, you do have that option once more. j.k. livin announced a partnership with online clothing retailer Represent this week to sell limited edition Alright, Alright, Alright-themed tees and hats, 100 percent of the proceeds from which go toward the foundation. 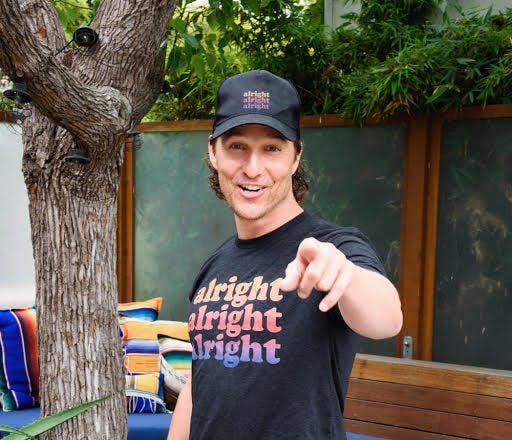 All of this is to say that McConaughey, and his foundation, are one of those colorful things that, in these curious times, we’re grateful exist. As he put it himself to Texas Monthly‘s John Spong back in 2008:

No one wants to eat their broccoli, right? I’m not saying j. k. livin is broccoli. But it is good for you. I’m not selling you straight candy canes, because then your teeth are gonna fall out. So live right. Take care of yourself. And if you have a completely different opinion of what that means from me, the only way j. k. livin can disagree is if you’re harming yourself or others. Other than that, it’s your call.