On Sunday, millions of fans watched the World Series on television, and 41,000 people saw it from Minute Maid Park. But only one watched the Astros’ heart-stopping win from a train ninety feet above the field.

“Holy smokes, what a ballgame,” says Bobby Vasquez, who spent eight hours in the train Sunday night. “This was not only the most exciting, but the most important game I’ve ever seen.”

Vasquez, better known as Bobby Dynamite to Astros fans, has been manning the train above Minute Maid Park’s left-field wall for seventeen seasons. Vasquez was a 22-year-old intern for the Astros’ tour department when he was called up to the tracks. “I was just in the right place at the right time,” says Vasquez, who spends his off-season editing a Deer Park community paper. (There’s no question which job he prefers: As Vasquez puts it, “baseball at work is a lot better than work at work.”)

For the past 1,400 game days at Minute Maid Park (he’s only missed thirteen since 2000), Vasquez has suited up in an orange Astros shirt and the same pair of overalls. To avoid rinsing out good luck, Vasquez won’t wash the uniform if the Astros win. If they lose, he gets to wear clean clothes at work. “They’re a little smelly this year, ‘cause we didn’t lose a lot,” Vasquez admits. 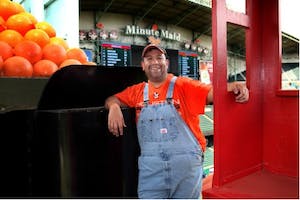 Once Vasquez has transformed into Bobby Dynamite—so named for his approximation of a dance from Napoleon Dynamite that Vasquez used to perform from his perch—he climbs into the 56-foot-long replica locomotive, where he’ll stay until the game ends. In case the game goes into extra innings, Vasquez brings along granola bars and a few bottles of water—which may provide a different kind of relief in a game like Sunday’s, which lasted over five hours. “I worked the eighteen-inning game in the 2005 National League Division Series, which was not much fun on the body systems,” Vasquez says. “There’s not a restroom up there, so you gotta make do.”

From his vantage point, Vasquez experiences a magnified version of Minute Maid’s collective reaction to games, which was particularly electric at the conclusion of game five. “The gravity of everything just felt awesome,” he says. “When Alex Bregman hit the walk-off hit in the tenth, watching the ballpark shake as the crowd erupted—that’s a feeling and a sight and a sound that I’ll never forget.”

For a hit like Bregman’s, Vasquez celebrates by playing the train’s bells and whistles, a welcome sound for any Astros fan. But after a home run, he takes his electric train for a spin on the 800-foot-long track at 2.5 miles per hour. In a typical game, Vasquez might get to do a home run victory run once. In Sunday’s mind-boggling game, he got to do it five times. “Oh, my gosh, it was crazy with the home runs,” he says. George Springer’s seventh-inning home run was particularly noteworthy: After flying 448 feet through the air, it landed on the train tracks. Vasquez made his celebratory run in the train, hopped down, and grabbed the ball that tied the game.

“When Springer came up and immediately redeemed himself with that home run, and tied the game back up—so many emotions and thoughts went into that one swing,” Vasquez says. “To me, that was a statement that we’re not backing down. We just took a shot from you, but we’re gonna punch right back.” Vasquez was thrilled to have the ball, but he knew he wasn’t the one who should keep it. After the inning ended, he made sure the ball found its way to Springer’s elated family. “That was such a special and important home run, I’m glad it’s in the right hands,” he says.

Thank you @AstrosTrainGuy and all of the @astros fans for getting the ball to George! We are very grateful! LOTS OF SMILES IN THIS HOUSE!❤️

Like any lifelong Astros fan, Vasquez, who grew up saving his lunch money change to buy bleacher seats for himself and his dad, is wary of jinxing his beloved hometown team. But he does believe that after Hurricane Harvey, the people of Houston have earned a win. “We’re now one step away from putting Houston on the top of the world,” he says. “For our fans who’ve been through a lot, what would feel better than bringing home the Commissioner’s Trophy this week?”

After cheering on his team at every home game this year, Vasquez wishes he could be there for game six. Instead, when the Astros play the Dodgers in LA on Tuesday, he’ll be watching on the big screen in Minute Maid Park—this time, in the stands alongside his fellow fans. But when the Astros take the field again for their first game in 2018, their conductor will be cheering them on from his train above the stadium. And if the Astros return as World Series champions? Vasquez might never be able to wash those lucky overalls again.