Two hours before the doors opened, people gathered in an adjacent parking lot, and judging by the trail of wine bottles and Bud Lite cans they left behind, they were finding other ways besides their iPhones to pass the time. With one hour to go, the gates to another parking lot opened, but this time it was the Redneck Country Club parking lot proper. They had to ditch the beers for that one.

Finally, at seven that evening, the tailgate ended. Hundreds of people—750 in the first 20 minutes—poured down the wooden walkway and into the heart of the Redneck Country Club. Maybe they rushed past the donor wall that ranked its most generous contributors as “Big Ass Gun” donors, with the smallest at “.22 Caliber.” Or maybe they didn’t notice that the focal point of the AstroTurf-ed seating area to their left—filled with stone fire pits and the kind of lawn folding chairs you bring to the river—was a full-size replica of General Lee from the Dukes of Hazzard. But what they couldn’t miss, a courtesy for anyone who might enter a place called the Redneck Country Club with false premises, was this sign bolted to the outdoor bar: 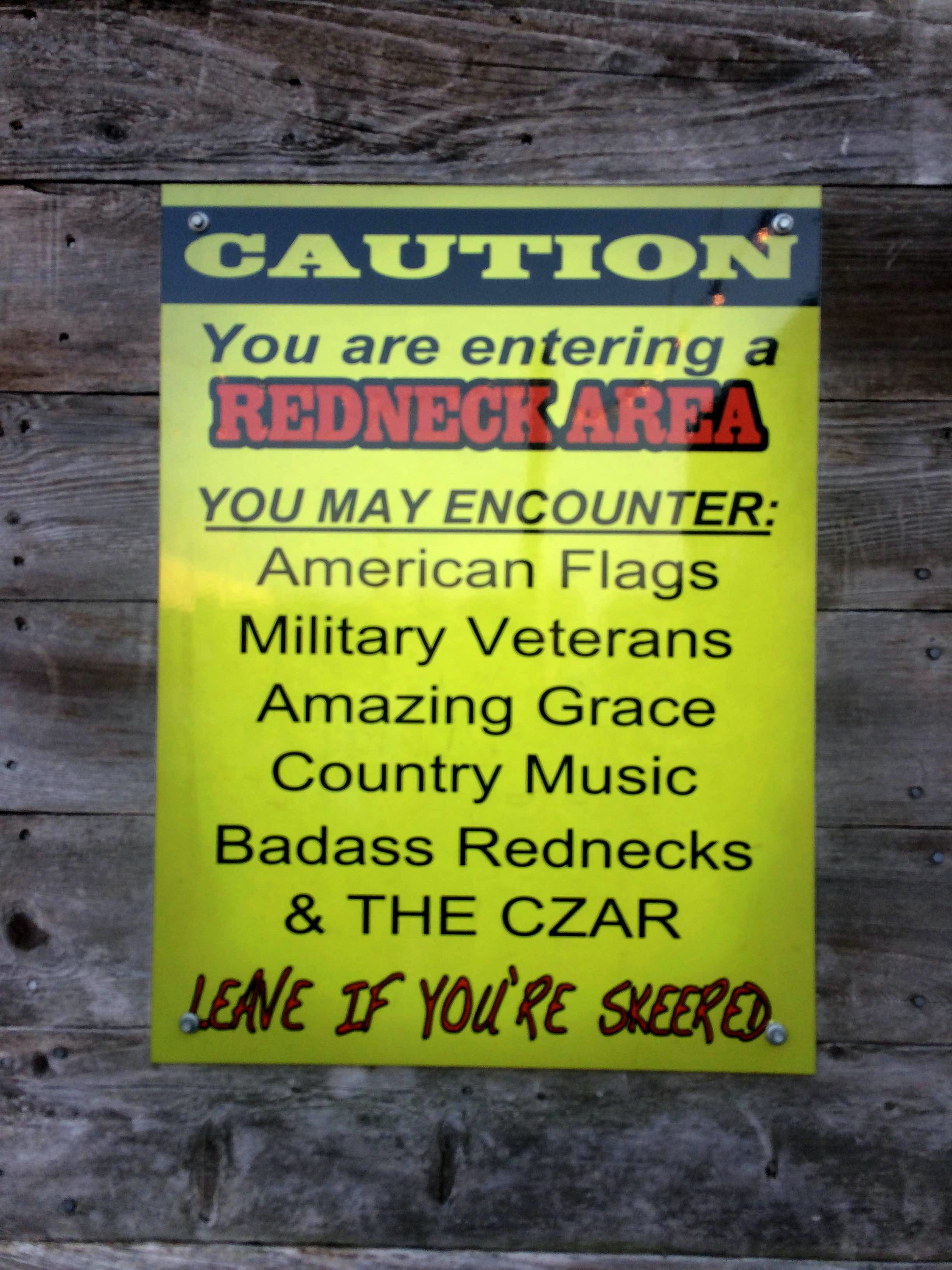 Let it be known, then, that the people who packed the Redneck Country Club on Super Tuesday ain’t skeered. Neither is Ted Cruz.

Cruz’s decision to hold his victory rally at a venue with such demonstrative name has caused national pearl clutching. Cable news anchors said it apologetically on air (“That’s the name of it, don’t get mad at me,” CNN’s Jake Tapper begged) or giggled every time they repeated it. But the Internet’s clickbait du jour wasn’t redneck in name alone. Just outside of the main room is an entrancing tiered chandelier made out of 350 Lone Star bottles. The walls of the gorgeous high-ceilinged main room, where Cruz addressed his crowd of supporters, looked like it was decorated by the world’s most tasteful taxidermist, with fowl, boars, and deer all represented. The Redneck Country Club very accurately describes itself as a “high-class redneck establishment,” and the honky-tonk’s décor, though lovely and shockingly thorough, shows that they’re embracing the ‘neck ethos without abandon.

In other words, Cruz wasn’t trying to pull one over on us when his camp booked the club as a venue. And in fact, it seems to be a very deliberate choice, because for Cruz it’s long been about location, location, location. Let’s rewind to when entered into the GOP circus in March 2015 at Liberty University, the largest Christian university in the world. He launched his presidential bid in front of thousands of young Christians (allegedly there under threat of a fine from the university), which was a smart move for someone who was positioned to be the God-and-country evangelical in the 2016 race. The decision to announce at an institution founded by Jerry Falwell Sr., a Southern Baptist preacher and co-founder of the Moral Majority, said a lot about the kind of people Cruz expected would deliver the GOP nomination to him. His speech reflected it. He detailed how faith in God saved his father, and how his own journey has been heavily influenced by his religion.

Now, snap back to Super Tuesday and his home state victory rally that was decidedly more raucous than a Baptist potluck. There was beer by the bucketful (literally). There were more than a few sparkly cowboy hats. There was live music before the speech that picked back up after the candidate left, with a few couples two-stepping along. Undoubtedly there were Christians in attendance who might skip church on Sunday morning if Saturday night got a little out of hand. This club, owned by conservative radio host Michael Berry, celebrates a different type of conservative voter: The kind that expects their president to protect the constitutional rights of guns, low taxes, and booze. The only shout-out the Big Man got was the cursory “God bless” bookending the speech. 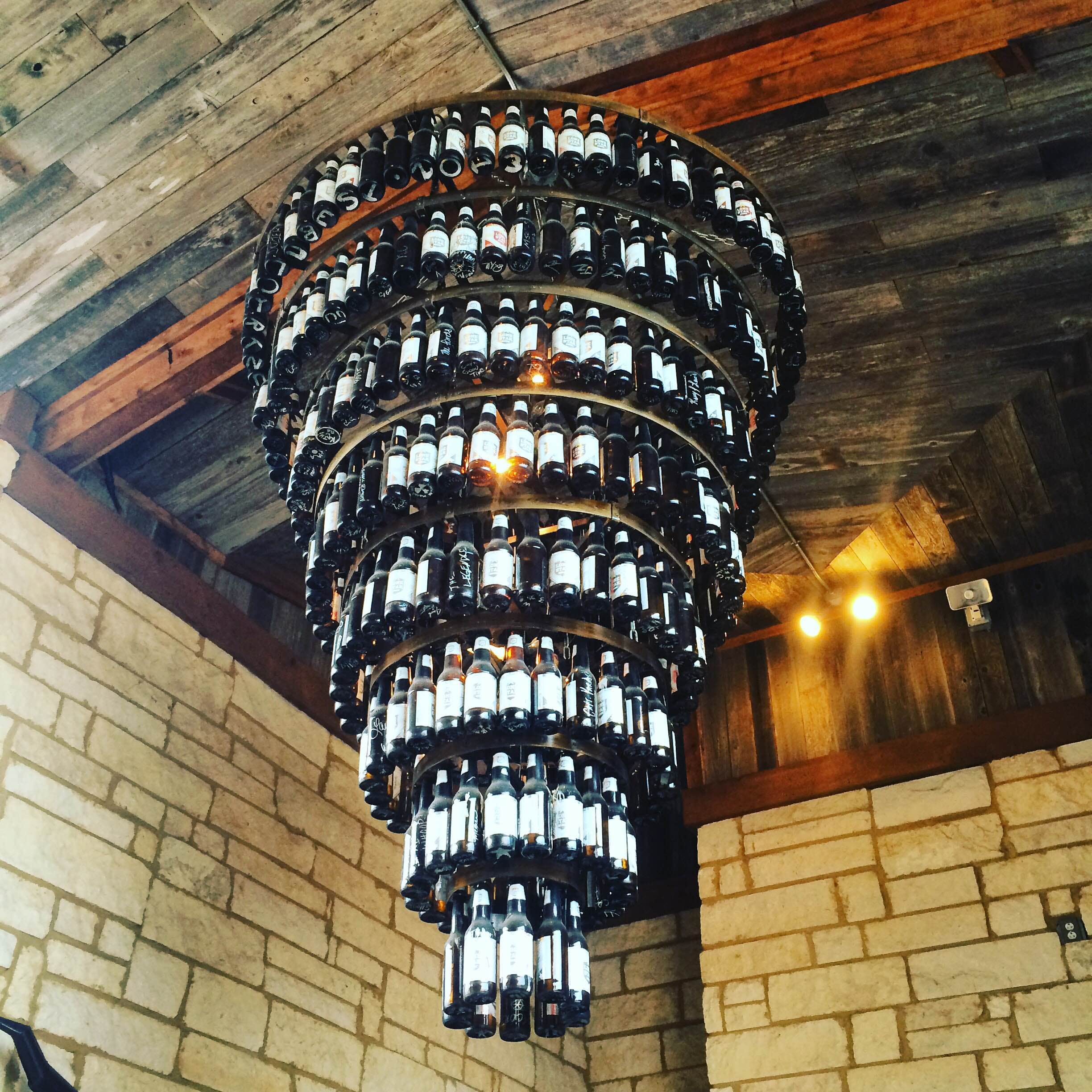 That puts Cruz’s new target voting bloc squarely on the type of people who showed up at the Redneck Country Club, like the man standing next to me with a bucket of beer, a koozie that printed “Secede” over the outline of Texas, and carried a copy of Dr. Seuss’s “Green Eggs and Ham” that he wanted the candidate to sign. They want someone who has demonstrated consistency in their principles, who will fight the establishment while still somewhat resembling it, and who will deliver on promises. Two themes emerged in the conversations that I overhead and entertained: The Texas Senator’s supporters are highly suspicious of Trump’s liberal past, and they believe that Marco Rubio is a lapdog for the establishment. So where does that leave them? Cruz. The guy that has made more enemies in the fabled Washington establishment than any other Senate member. The guy who is a constitutionalist and a conservative to his core.

Ted Cruz may not be the guy that you want to share a beer (or a bucket of beer) with, and he’s certainly no redneck. They don’t do pasture parties at Harvard. It’d be much easier to imagine Rick Perry or George W. Bush hobnobbing good ol’ boy-style at the Redneck Country Club. But in choosing the club for his venue, Cruz isn’t trying to claim the Texas swag that Perry or Bush effortlessly exuded. Instead, he was trying to take his message straight to his fellow hard-line conservatives who want to screw the establishment. And if they happen to be beer-swilling, self-identified rednecks? So be it.