Whether you’re a longtime supporter or a bandwagon fan, it’s time to show your support for Houston’s World Series team. And what better way to celebrate the Astros than with unbridled consumerism? Sure, anybody can buy an orange ballcap or jersey and strut down the street with their easily-purchased fan bonafides. If you want to show off your Astros fandom in weird ways, meanwhile, we did some of the heavy lifting by crawling through the depths of eBay and Etsy to find some of the truly weird stuff out there. Here’s what we found. 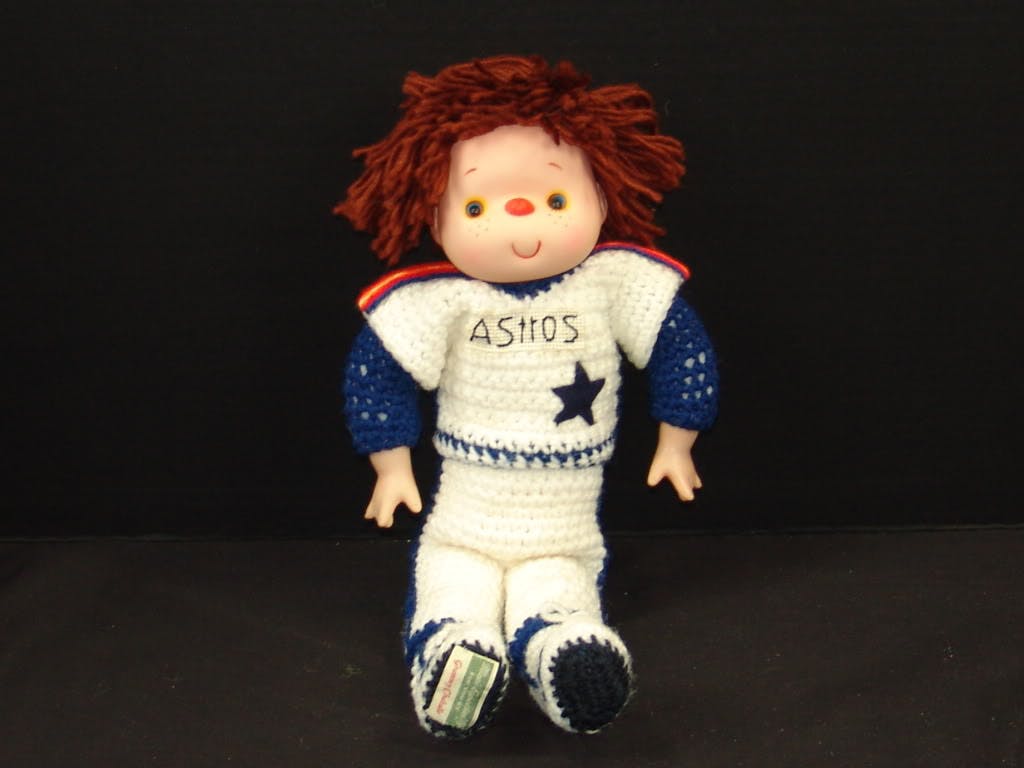 Do you like baseball and creepy dolls? If so, you will not believe what we have in store for you: Via eBay, here’s a vintage-style doll with a plastic head and hands, plus a knitted Astros uniform for you to snuggle up with—or to wave around at Dodgers fans as an implied threat of a vague curse. 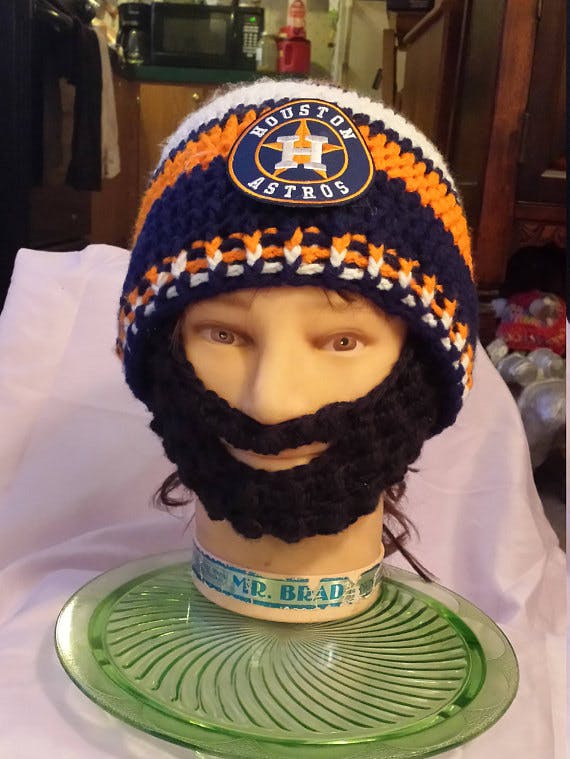 Games one and two of the World Series in Los Angeles are sweltering affairs as temperatures reach over 100 degrees in the sun. Game three in Houston on Thursday will bring some relief, with a high of 84 degrees—and by Saturday’s game four, with a high of 64, you might actually be a little bit chilly. Great news, if that’s the case—over on Etsy, you can pick up this handmade Astros beanie that comes with a Dallas Keuchel-style beard built in to warm your face, as Altuve’s bat presumably warms your heart. 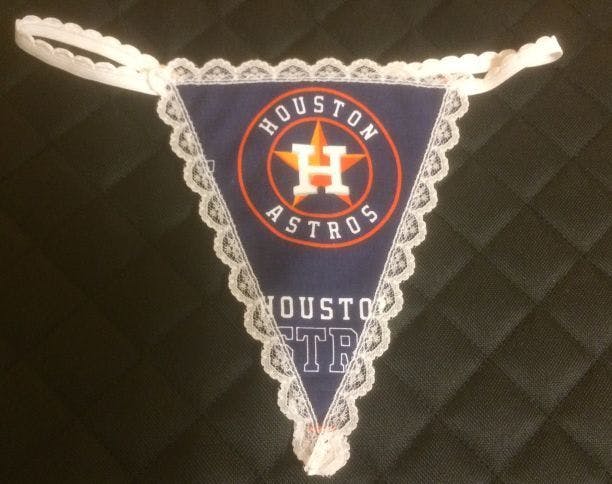 We’ve never really given it a whole lot of thought, but if we had to list the sexiest sports, baseball probably wouldn’t be on it. (Maybe figure skating?) Still, if the bats and balls put you in the mood, you’re in luck: For a mere $9.99, you can purchase a lacy g-string thong adorned with the Astros logo for your post-Series celebration.

An Astros uniform for your decorative lawn goose 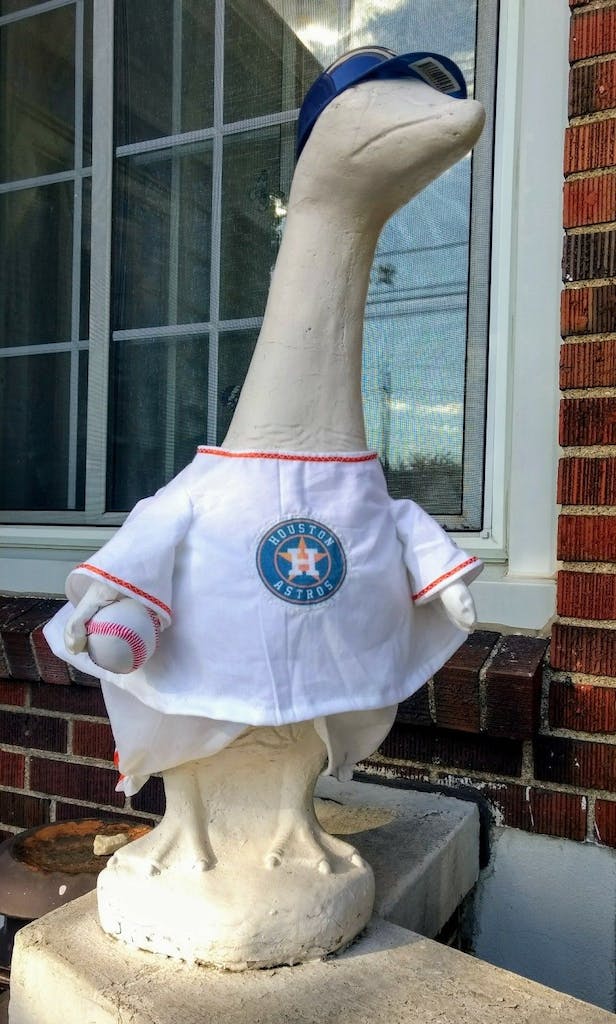 So J.J. Watt got hurt again, which means you needed to take the #99 jersey off your decorative lawn goose until next year. But what are you going to dress it in? A Rockets jersey? Geese look ridiculous in tank tops, and without a beard, how will anybody know if it’s supposed to be James Harden or Chris Paul? Worry not, friends: You can celebrate the World Series appearance of your favorite MLB team by showing off your ‘Stros fandom through the apparel of your lawn goose, so everybody knows what kind of people live in your house.

A vintage Astros-themed puppet of some sort 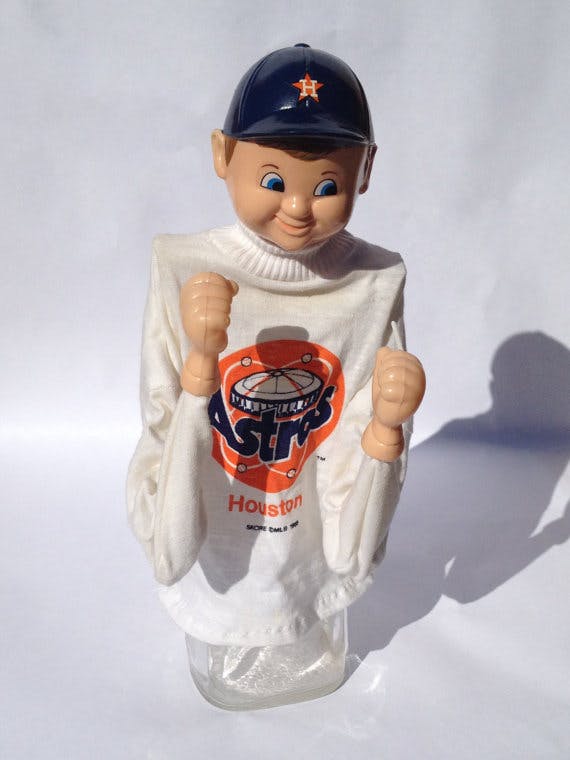 This doesn’t seem like it’s meant to represent an Astros player—it’s more like an Astros fan, we guess? Whatever it may be, it’s wearing an Astros cap and a delightful vintage Astros sweater, and it will punch you, because that’s apparently what it’s built to do. If you look at it from the front, it’s less creepy than the vintage doll up at the top of this list, but if you lift up the sweater, you’ll see that its body is basically just a thin plastic straw, and it kinda freaks us out. Either way, it’s $18 on Etsy right now.

This is kind of like the sexy Astros underwear, except this is meant to be worn on the most special day of your life. Also, you will remove it in front of all of your friends and family—demonstrating your loyalty to the team, as well as your partner, for all to see. We hesitate to call anyone who gets married in anything else a true fan. 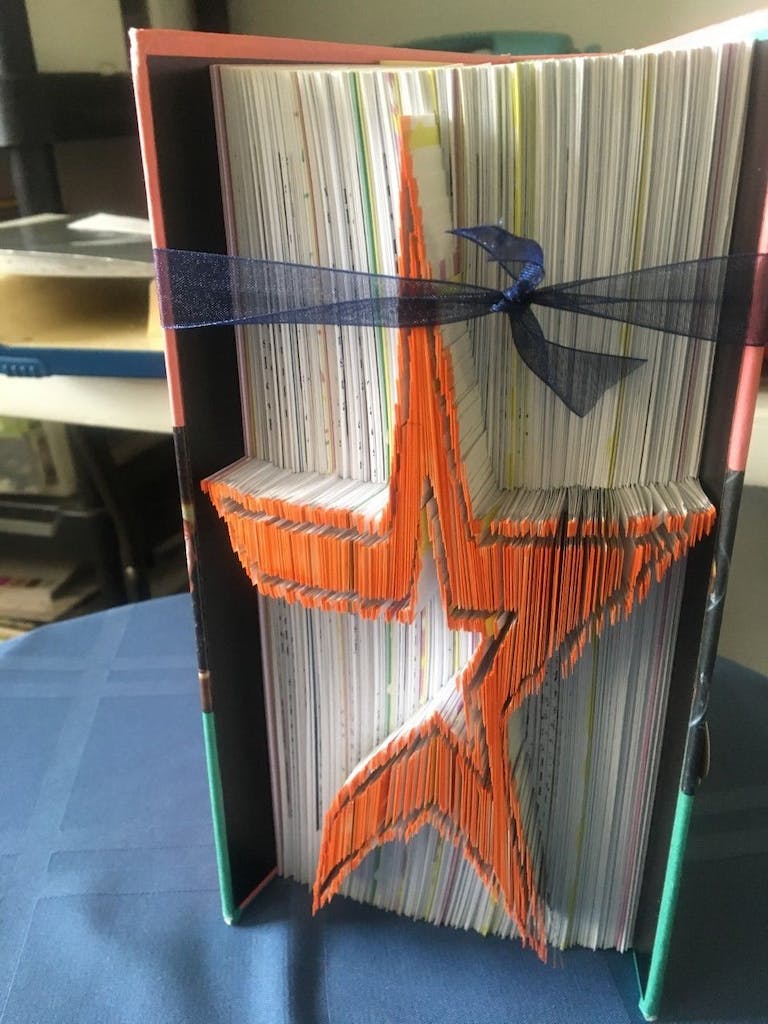 So, like, art doesn’t have to be accessible to be meaningful. It’s entirely possible somebody looks at this… book(?) that has an Astros logo cut into its pages(?), if you open it the right way, and is like, “That’s how I feel inside all the time.” If that’s you, and you have $30 to spare, you can put this on your shelf and stare at it as you nervously pace a hole in your living room floor, waiting to see whether the team is going to repeat the 2005 World Series or shock the world and the Dodgers with a dominant performance this year. If not, leave it for the next person—as this list proves, there’s apparently something out there for everyone.