This should have been a great season for the Cowboys. Coming off of an unexpected deep playoff run, they managed to re-sign star receiver Dez Bryant in the offseason, the surprisingly stout defense got ace linebacker Sean Lee back, and they managed to bolster the team’s greatest offensive strength by signing a stud lineman La’el Collins as an undrafted free agent under weird circumstances. With Tony Romo—who had finally overcome the haters to prove himself one of the NFL’s best quarterbacks—at the center of the team, things looked awfully good.

But that was week one. Here’s week six: Bryant is a month out from surgery for a broken foot, and Romo is on injured reserve (with a designation to return) after breaking his collarbone. Mercifully, the team is about to enter a bye week that, at the very least, will not see them lose yet another consecutive game.

Losing one of them is bad news, but losing both is catastrophic. Romo could succeed even tossing passes to supplemental receivers, and Bryant could bail out any backup quarterback with his catches. But the past three weeks, the Cowboys have been relying on Brandon Weeden making plays with Terrance Williams and Cole Beasley. As you might expect, it hasn’t worked out so well. Since Romo got hurt in the week two game against the Philadelphia Eagles, the Cowboys haven’t won a game.

For his part, head coach Jason Garrett finally acknowledged that Weeden wasn’t going to get the job done after a 30-6 thumping against the Patriots in which he threw for 188 yards, no touchdowns, and an interception..

Thus begins the Matt Cassel era in Dallas, which should thrill Weeden haters and terrify anybody who saw Matt Cassel in his tenure with the Kansas City Chiefs, or his even less inspiring time with the Minnesota Vikings, or his even more depressing offseason attempting to beat out a converted wide receiver for the starting QB job in Buffalo. The Cowboys traded a fifth round pick to the Bills for Cassel, a move that presumably had the staff in Buffalo feeling like they just found a $20 bill in their winter coat. Cassel is not a good quarterback—but he’s the starting quarterback of the Dallas Cowboys, at least for now.

There’s no historical reason to believe that Cassel will be more effective in that role than Weeden was—but with Romo ineligible to play until November 22 at the earliest, somebody is gonna have to take snaps for the Cowboys. Right now, that’s Cassel, but if Weeden’s leash was short, there’s no reason to believe that Cassel’s will be longer. So let’s take a look at the range of options for who could play quarterback for the Dallas Cowboys between now and Romo’s return, as the team hopes to emerge from their time in the wilderness still in a position to compete for the NFC East title. 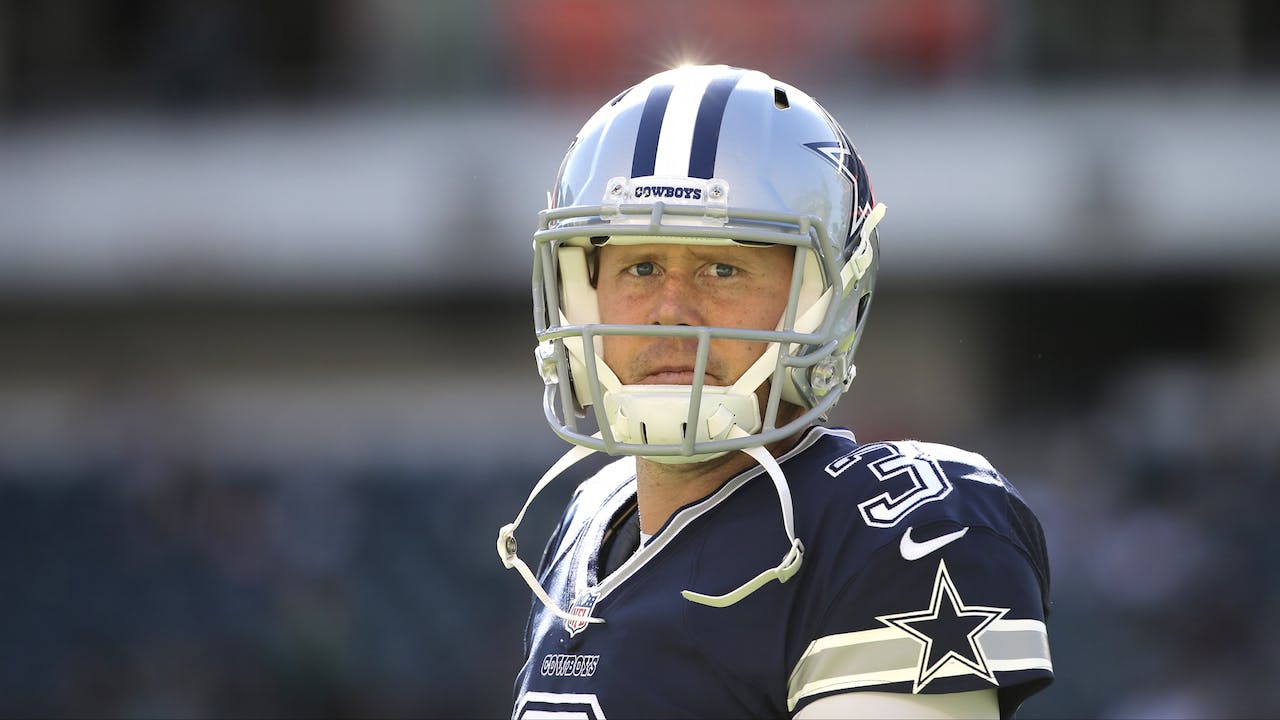 Why he should play: So, Weeden has never really proven himself to be very good at football, but he also has been the starting quarterback of the Dallas Cowboys before, and he spent the entire offseason with the team. So though he’s never shown that he deserves the job on the field, we can at least be certain that he knows the offense, which means that he’s unlikely to make the sort of crippling mistakes that someone less familiar with the team—say, someone who came over in a mid-season trade who has never been very good elsewhere—would make. In other words: Weeden may not be a winner, but he’s not the biggest loser to ever strap a star on his helmet.
Why he shouldn’t: The biggest problem with Weeden is that he’s the ultimate conservative, game-manager quarterback. It’s not his mistakes that kill the team, it’s the fact that his favorite play on third and seventh is a five-yard pass, and his favorite play on fourth down is watching the team punt. If the rest of the team were playing perfectly—if the running game were dominant, or the receiving corps had a threat like Dez Bryant to keep defenses honest—then maybe that approach to game management would work. But right now, the Cowboys don’t just need somebody who isn’t gonna lose them games—they need someone who can win them.
Will it happen?: It already did, and it might again—Weeden has been uninspired, but not an outright disaster, so if Matt Cassel struggles, he could find himself back in action.

Why he should play: Look at his name. Is it “Brandon Weeden”? Jason Garrett noticed that it isn’t, and thus Cassel is the starter in Dallas. Plus, remember when he filled in for Tom Brady in 2008 when the three-time Super Bowl MVP got hurt? The Patriots went 11-5 that year. What’s not to like?
Why he shouldn’t: Y’all, 2008 was a long time ago, and nothing Cassel has demonstrated in the seven years since has indicated that he was capable of doing that with a team other than a just-off-of-a-Super-Bowl-appearance Patriots. His passer rating since 2008 is a depressingly Weeden-esque 75.6 (Romo’s, for comparison, is 97.6). Cassel came over in a mid-season trade in a year in which he wasn’t even good enough to win a wide-open competition to start for the Buffalo Bills, who ended up settling on a converted wide receiver named Tyrod Taylor for their quarterback. Nothing about Matt Cassel should inspire confidence.
Will it happen?: Oh, yeah. Get your Matt Cassel jerseys ready, Cowboys fans, he’s your man. At least until he isn’t, which could be pretty soon.

Why he should play: You know how Matt Cassel and Brandon Weeden are pretty bad at playing football? We don’t know if that’s true of third-string quarterback Kellen Moore, because he’s never thrown a pass in a regular season NFL game. When your starter stinks, the most popular guy in town is the backup quarterback. With that in mind, we’re probably a game or two away from people chanting “Kell-en Moo-ooore” *clap clap* *clapclapclap* at AT&T Stadium after Cassel’s third interception.
Why he shouldn’t: Kellen Moore probably stinks, we just haven’t seen him in action yet. At the very least, he was picked up in September after being cut by the Detroit Lions, which isn’t the sort of prestigious resume that leads one to think “this guy who has never thrown a pass in the NFL should be the starting quarterback for the Dallas Cowboys.”
Will it happen?: Maybe, sure. Weeden clearly doesn’t have the team’s faith, and Cassel—coming in without any sort of offseason and never having been very good to begin with—isn’t likely to impress. If the Cowboys opt to do a QB shuffle until Romo comes back, it might end up Moore’s turn.

Why he should play: Matt Cassel’s lone good NFL season was seven years ago. Griffin’s was only three years ago, and he’s been sabotaged by his coaches ever since. Granted, he’s currently on the roster in Washington, and he’s probably not going anywhere because of a weird power struggle between coaches and ownership, but still: Griffin’s upside is considerably higher than any of the ‘Boys other options. Behind the offensive line in Dallas, he’d have time to play ball the way that he did in Waco, and that would mean good things.
Why he shouldn’t: Besides the fact that he’s already on a team that seems inclined to neither play him nor trade him, Griffin hasn’t been good in a few years. You can blame the coaches who’ve undermined him if you want to (and we do!), but a quick trade to Dallas and being thrust into a starting role would not be setting him up to succeed, to say the least.
Will it happen?: Nah, but it’s fun to imagine a scenario in which the Cowboys had traded for RGIII in the offseason to back up Romo, because it likely would’ve left the team in better shape than they’re in right now.

Why he should play: The current starting quarterback for the Detroit Lions found himself benched last Sunday after throwing three interceptions to the Arizona Cardinals—the first time in the Dallas native’s career he had the indignity of riding the pine while healthy. Stafford is a good-to-very-good quarterback who’s struggling this season, and with the Lions currently at 0-5, the coaching staff that drafted and groomed Stafford long gone, it’d make a lot of sense for the Cowboys to put in an offer for a quarterback who may be done in Detroit, but who can clearly still play.
Why he shouldn’t: The issue of compensation aside (if the Lions are as sour on Stafford as it appears, it’s not unrealistic think they might let him go for a third-rounder and take a top quarterback in the draft next year), there are other considerations: Namely, could the Cowboys fit Stafford’s salary under the cap, and could he come in and play competently if he were acquired cold? “Competent,” in this context, is a relative term—we’ll go out on a limb and say that he could probably play as well as Cassel—and cap issues tend to be something people can juggle with some creative extensions. Big, mid-season trades like this almost never happen, especially at positions other than running back—but it’s worth noting that one of the few recent examples of that was when the Cowboys acquired wide receiver Roy Williams from the Lions in 2008. The bigger issue, though, is what it would mean for Romo if the Cowboys picked up a player like Stafford—Romo’s an aging veteran with a history of injuries, but he’s also one of the NFL’s best quarterbacks, and it’d be unrealistic to keep both of them around for the future. Stafford would be a big change, and one that would probably be much more than a fill-in.
Will it happen?: No, stuff that makes this much sense almost never happens.

Why he should play: Quick, here’s an informal poll of people who’ve seen Matt Cassel or Brandon Weeden play quarterback, and who’ve seen Aikman’s latest Miller Lite commercial: Which looks better to you? Plus, Aikman is only eight years older than Colts backup Matt Hasselbeck, and he just beat the Texans! We rest our case.
Why he shouldn’t: Troy Aikman is 48-years old and has been retired since 2000 after suffering back injuries and concussions.
Will it happen?: You wish.