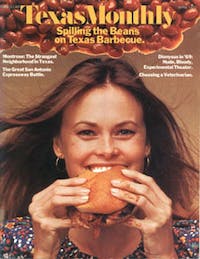 IF FORTUNE MAKES STRANGE BEDFELLOWS, the fortunes of death make the strangest of all. In the state cemetery in Austin, J. Frank Dobie, Ma and Pa Ferguson, and Big Foot Wallace lie within a 30-yard radius of one another. Their graves are near the top of a small hill which is lined with the markers of other governors, as well as a varied sprinkling of Texas rangers, park superintendents, insurance commissioners, judges, legislators, and one other writer, Dobie’s friend Walter Prescott Webb. Below these graves stretching across a broad field are innumerable weathered stones hardly two feet high which mark the graves of Texans who were casualties or veterans of the Civil War.

On an overcast day last month we drove out to the cemetery. It is a little east of I.H. 35 just off Seventh Street, in an area of old framed houses which time has not treated well; but there are trees along the streets, a few gabled mansions recalling the neighborhood’s better days, and, once off Seventh, a heavy stillness which the cemetery, as large as two city blocks, undoubtedly contributes to and may cause.

We parked near the caretaker’s building. It adjoins two greenhouses where plants for state offices and grounds are protected during the winter and where new seedlings are sprouted. Two gardeners were on duty that afternoon. One, named Billy, a cantankerous gent, lean and bony, with gnarled hands and an unfortunate limp, told me that he had been a prisoner of the Japanese during World War II, that his Ford had cost $5000, that he made most of his living playing pool at $5 a game, that every now and then when he was mowing the grass around the graves one of the corpses would sit up and ask him for the time.

The other gardener, who had simply shrugged with embarrassment when we asked his name, punctuated each of Billy’s remarks with “That’s a quarter; now there’s fifty cents; six bits he owes me now.” After the story about the corpse, he said, “Do believe that one’s worth a whole dollar. I’m gonna be rich ‘fore sundown.”

Telling them that we would be back after seeing the rest of the cemetery grounds, we walked toward the graves on the hill. By far the most interesting monument—calling it a grave would be an injustice—is enclosed within a white wooden structure, probably 15 feet tall, which looks like a cross between a gazebo and a mosque. This odd building shields the elements from the crypt of Albert Sidney Johnston, a general in the army of the Republic of Texas, who died while commanding the Confederate forces during the battle of Shiloh. A large marble block supports a statue of Johnston lying in state, hand across his heart. The statue’s face stares peaceably ahead, handsome but not imposing and looking not at all like the stern warrior we had always imagined Johnston to be.

Pa and Ma Ferguson’s stone is half way up the hill and, if it is not so imposing as Johnston’s, it is fitting enough. The Fergusons are buried side by side before a rather phallic-shaped stone probably ten feet tall, with outcroppings on either side which bear their epitaphs. Ma’s declares her faith in God, but Pa’s reads “He loved his fellow man and was generous to a fault.” Since Ferguson in his stormy stewardship of Texas was certainly something to a fault, perhaps his epitaph is no more inappropriate than most.

The remainder of the graves are rather ordinary by comparison. There are simple markers with name and dates on one side and a list of accomplishments or positions held on the other. Some of the names are well-known but most are obscure, their accomplishments (“Associate Justice Texas Supreme Court 1934-1938”) though admirable, becoming of less interest day by day.

Noticing a tall obelisk at the very top of the hill, we cut short our ramblings through the stones to see which historical personage had merited a monument that was easily twice as tall as any other. It turned out to be that of Edmund J. Davis, the last Carpetbagger governor of Texas whose term was from 1870 to 1874. The spire was erected in Davis’s memory by his brother, possibly, we speculated, for revenge, as Davis had become a hated man by the end of his administration. Today his monument, tall as it is and standing on the highest point in the cemetery, dominates all around it—even the tomb of Stephen F. Austin.

Before leaving we kept our promise and stopped back at the caretaker’s building to smoke a cigarette with Billy. The other gardener had disappeared, which Billy considered all for the best. He had something important to tell us. “I learned long ago,” he said clenching a Camel between his thumb and forefinger, “that if you’re sitting down and your boss comes in the room, don’t pop right up. If you do that, he knows he’s got you.”

We talked for a while longer before the other gardener came in. Billy was telling me about the special shovel he’d had made. The other gardener said, “How much do he owe me now? Ole Billy’s loosing more money than he make this day .”