Yes, we know Brittney Griner and her Lady Bears are going for an undefeated season and the National Championship tonight. But did you see Robert Griffin III on Jon Gruden’s “QB Camp” last night on ESPN? The Baylor QB handled the in-your-face coach-turned-commentator as gracefully as he launches his seventy-yard bombs.

In the first video clip below, RG3 talks about his touchdown celebrations and his team’s mindset going into the season opener against TCU, which the Bears won. “We didn’t have a great showing against them the year before,” RG3 said. “They kind of embarrassed us. The way Coach Briles put it is, ‘They stole our bike. Let’s go get our bike back.'”

In the second clip, he talks about his unusual socks and why he thinks he’s already been selected number one in the NFL Draft on April 26, ahead of the consensus number one, Andrew Luck. “Washington didn’t trade up to number two to pick a guy at number two,” RG3 said. “They’re gonna pick a guy that they would have picked at number one. So really in this draft, there are two number one picks.” 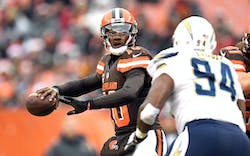 Who Should Play Quarterback For The Dallas Cowboys?

The Time Has Come To #FreeRG3