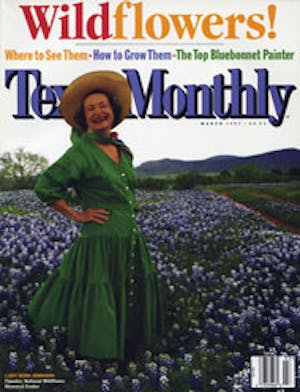 When the first tufts of blue appear along the highways and back roads, Texans gear up for their favorite springtime spectator sport: wildflower watching. Although actually seeing the flowers is the best part—like opening Christmas presents—there are satisfying related rituals. First you dig out the camera. If you’re compulsive about knowing what you’re seeing, you haunt bookstores for the perfect field guide. Then you consult newspapers for the season’s best trails. At last, some Saturday morning, you pile into the car and go—hoping that along the way you’ll happen upon a secret meadow of the most breathtaking flowers ever or, almost as good, the ultimate smoke-filled barbecue joint. To help your search, here is a sampler of our favorite flowers and where to see them. (For up-to-the-minute information, call two excellent statewide hotlines: the National Wildflower Research Center, March 16 through May 31, 512-832-4059, and the Texas Department of Transportation, March 16 through April 30, 800-452-9292.) If you would also like to observe wildflowers in your yard, see “Go Wild,”. And if you want to gaze upon bluebonnets year-round in the privacy of your living room, consult “Blue Period,”.

Texas has six state flowers, all of them bluebonnets. And if any more species of bluebonnets are found in the future, they get to be state flowers too. It all began in 1901, when the bluebonnet narrowly beat out the cotton boll and the cactus flower in the great state-flower floor fight in the Texas Legislature. (John Nance Garner, a young House member and U.S. vice-president-to-be, got his nickname, Cactus Jack, at that time because he championed the prickly pear.) But even though the bluebonnet won, it was the wrong bluebonnet. Embarrassingly, our august lawmakers had designated the relatively obscure and somewhat pallid species L. subcarnosus instead of the radiant and widespread, deep blue L. texensis. Not until 1971 was the goof corrected and all bluebonnets included. So rest assured, whatever bluebonnet you’re looking at—tall or squatty, lavender or purple, white or pink—is the state flower.
• Around Lake Buchanan and Inks Lake; also the area around Llano, Burnet, Marble Falls, and Kingsland, especially FM 1431. • I-10 between Schulenburg and Flatonia. • Big Bend National Park, around Study Butte and Panther Junction. • Along I-35 between Dallas—Fort Worth and South Texas. • Anywhere in Washington County. • Mason County Loop (from U.S. 87 southeast of Mason, take Ranch Road 783 south 9.8 miles to Threadgill Creek Road, turn left, and go 9.6 miles back to U.S. 87).

The Indian paintbrush steals other flowers’ lunches. Something of a parasite, it sidles up to nearby plants and quietly insinuates its roots against theirs. When times get tough, it taps into its hapless host’s store of water and minerals. Bluebonnets are a favorite target (which is why you often see paintbrushes hanging around bluebonnet patches), but this cuckoo of the plant world isn’t picky; grasses, sagebrush, and oaks do almost as well. Standing six to twelve inches tall, paintbrush is pollinated by low-flying hummingbirds, which delicately ravish its tubular flowers. The Texas paintbrush is generally a creamy orange or a subdued red, the color coming from the petallike bracts that envelop the plant’s small true flowers. Strangely, a single paintbrush looks dull while masses of them glow sunset bright, intensifying the hue of everything around them.
• I-10 between San Antonio and Brookshire. • U.S. 281 between Blanco and San Antonio. • LBJ State Park, U.S. 290 east of Stonewall. • U.S. 281 between Johnson City and Marble Falls. • I-45 just south of Dallas, near Hutchins.

Just as bluebonnets signal spring, Indian blankets herald summer. When Big Blue fades, sprawling fields of these rusty-red-and-yellow pinwheels take its place. Tough and tolerant of drought, they can last through Texas’ blistering summers if revived by an occasional shower. Genetically capricious, Indian blankets come in numerous species and color variations: cream with yellow tips, coral with peach tips, peach with yellow tips, and red with white tips. Don’t confuse Indian blankets with a similar summer bloomer, the black-eyed Susan. The latter is yellow and occasionally has an inner ring of dark brown, which the Indian blanket never does.
• U.S. 290 between Hempstead and Brenham. • Texas Highway 49 between Jefferson and Daingerfield. • Texas Highway 29 between Liberty Hill and Georgetown.

Phlox are the nosegays of the wildflower world—multiple clusters of carmine blooms that cover the hills in bouquets. The flower got its species name from the nineteenth-century naturalist Thomas Drummond, a Scottish botanist who collected more than seven hundred plants in Texas. He sent samples of phlox to England, where its vivid blooms were an overnight hit. Today, domesticated phlox may be the most widely planted annual in the world. If you want to see the real, wild thing, seek out sand: Drummond’s phlox flourishes in sandy soil. It graces Central Texas too, where its four- to twenty-inch stems bear one-inch-diameter blooms that show up in lavender, pink, and white as well as red. Legendary Texas naturalist Roy Bedichek, struck with phlox’s wide distribution, declared it a better candidate for state flower than—heresy!—the bluebonnet.
• I-45 and Texas Highway 105 near Lake Conroe. • U.S. 290 between Manor and Paige. • Texas Highway 21 between Paige and Caldwell. • Texas Highway 71 between Austin and Bastrop.

In their natural state dogwoods glow like lights deep within the forest, patches of dappled white or pale pink almost hidden under the green canopy of the pines. In the spring throughout East Texas, the trees turn highways and city streets into a profusion of blooms. The dogwood’s blossoms are actually enlarged bracts; the real flowers are the small clusters in the center of those four notched scoops. How did a flowering tree with pristine white blossoms get stuck with such an eccentric name? Because in England, according to one theory, people once used a brew made from a local species of dogwood to wash mangy canines. Another hypothesis comes from the fact that in Britain, dogwood is also called dagwood, not for any use in sandwiches but (more likely) from the Old English word dagge, the root of “dagger.”
• U.S. 287 between Crockett and Corrigan, bordering Davy Crockett National Forest. • Around Woodville. • I-30 between Texarkana and Mount Pleasant.

Winecups have always seemed slightly unreal to me. How could that luminous, fiery purple come from nature’s palette? It looks as if it burst out of a special-effects studio. And what about that name? Cuplike they are, but no Burgundy or Merlot was ever so vivid. Smallish as wildflowers go—their shape makes them seem narrower than their two-inch diameter—winecups grow across Texas and northward to the Dakotas on roadsides, in thickets, and on scrubland, cascading down rocky slopes, popping up in stands of other flowers, glowing gemlike to attract butterflies and bees (which pollinate them) and human beings (who admire them).
• U.S. 59 between Lufkin and Nacogdoches. • Texas Highway 7 between Nacogdoches and Crockett. • Texas Highway 71 between Austin and Bastrop. • Texas Highway 159 between LaGrange and Bellville.

The writer O. Henry had harsh words for the prickly pear. In his story “The Caballero’s Way,” his protagonist, the Cisco Kid, carefully picks a path across the desert scrub, where “uncanny and multiform shapes of cacti lift their twisted trunks and fat, bristly hands to encumber the way.” If nature were logical, these “fat, bristly hands” would bear leathery blooms. But instead the flowers are fragile, almost gauzy, springing forth after a rain in shades of yellow, scarlet, and peach that light up the landscape like a carnival. The fat red and violet fruits that follow provide almost as good a show. • Big Bend National Park, especially in Rio Grande Village.
• Willow City Loop (near Texas Highway 16 off FM 1323, look for sign; terrific for most wildflowers). • Texas Highway 29 between Georgetown and Burnet.