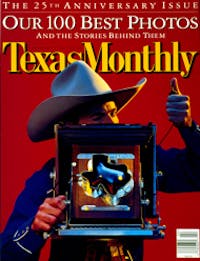 FROM BUSINESS AND POLITICS to celebrities and crime, Texas Monthly has examined the state of the state for 25 years. The Austin-based magazine was founded in 1973 by Michael R. Levy, who believed that Texans were as loyal to the state as a whole as they were to the towns where they lived, and that the former republic deserved—and would support—its own national journal. Beginning with the first issue in February 1973, Texas Monthly gradually developed into a respected publication that has won eight National Magazine Awards—the industry’s equivalent of the Pulitzer prize. Now some 2.5 million people turn to it every month to get a reading on Texas. To mark our twenty-fifth anniversary, we offer a peek deep in the heart of Texas Monthly.

The magazine is not the first Texas Monthly. Early in the century, two other periodicals used the same name.

Texas Monthly has 112 staff members. Forty-four percent are native Texans. More than a third attended the University of Texas at Austin; only two went to Texas A&M. The staff includes three lawyers.

The January 1986 sesquicentennial issue was Texas Monthly’s all-time best-seller; it sold 96,525 copies on the newsstand. The runner-up was the May 1995 issue on gun control, which sold 78,140 copies—largely because the cover photo was of tejano singer Selena, whose murder was still painfully fresh. Except for the first few skimpy issues, the worst-selling one was August 1990, which touted Texas capitalism in Romania; only 19,713 copies sold.

Various staff members have appeared on the cover or in inside photos, including executive editor Paul Burka dripping with chili, senior editor Joe Nick Patoski as an unctuous salesman, associate editor Chester Rosson as a shocked newspaper reader in the bathtub, advertising vice president David Dunham as a businessman menaced by the shadow of a giant steer, and advertising vice president Elynn J. Russell as both a prostitute and a murderess.

The staff’s favorite questions from out-of-staters include “What is your magazine about?” “How often does it come out?” and “You’re faking that accent, right?”