– There is a college football award called “Arby’s League of Brisket Smokin’ Hot Player of the Week.” That’s a mouthful for a promotional title. I wonder what they win?

– If you’re in Austin for lunch today, you might want to try out Micklethwait Craft Meats. They’ll have the crew from Eat St. there filming, and they need a crowd.

– New York City has a new crop of pitmasters, and a few are profiled here by Nick Solares.

– Mike Sutter in Austin worries that the big billboards along I-35 advertising for the new location of Donn’s BBQ will cause travelers to stop and eat their barbecue. He likes this grocery store barbecue a bit better. 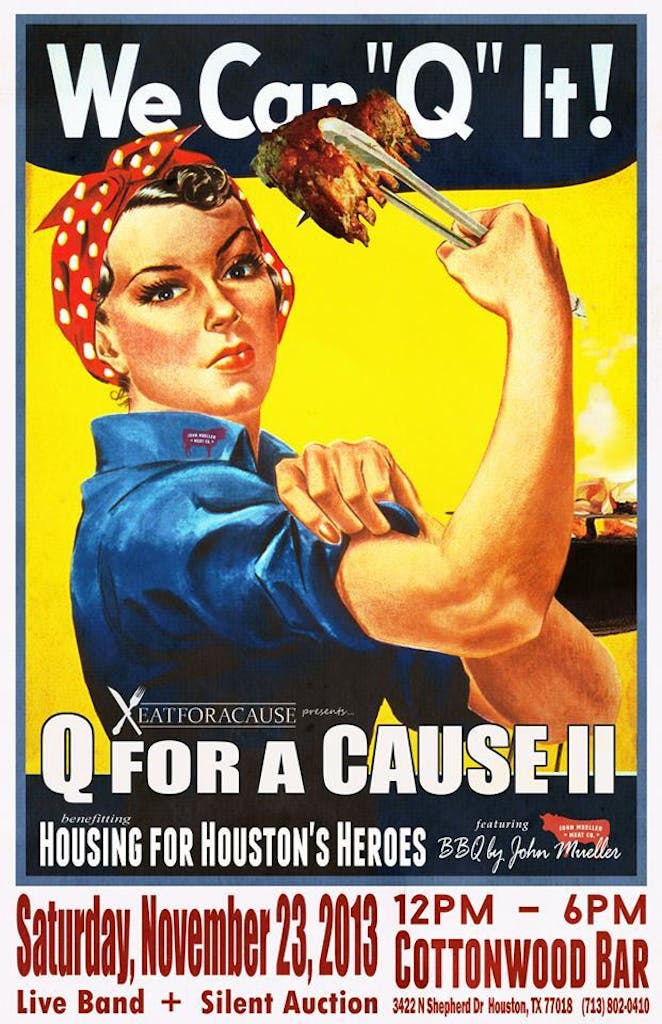 – John Mueller will be back in Houston cooking for Q for a Cause in November:

– Get some St. Arnold’s Beer and some barbecue at the Monterey in San Antonio on 10/26. The Backyard BBQ & Beer event will run from 11-3.

– Meathead discusses the use of the Faux Cambro, aka a plastic beer cooler, and how it can help your barbecue game.

– Here’s an incoherent, rambling article from the Austin American Statesman that talks about smoked brisket from HEB. If you can determine the writer’s point, I’d like to know.

– This isn’t new, but it’s new to me. It’s a video with Dr. Kent Kirshenbaum from NYU discussing the science of grilling and smoking including nitrosohemochrome which causes the smoke ring. It gets good around the seven minute mark.

– The tweet from Miller’s BBQ in Belton says it all:

Weekends spent with the Miller family and friends gutting out the building next door. We are converting a flower shop to a sausage factory!

– Looking for good barbecue in Memphis? Other than the questionable statements in the article intro, here’s a pretty good list.

– On mail order barbecue options around the country from US Airways Magazine.

– Mind of a Chef is a food show on PBS, and this weekend’s episode will feature chefs Sean Brock and Steven Satterfield and South Carolina pitmaster Rodney Scott. There will be a whole hog too.

– Austin news station KXAN humorously attributed the line at Franklin Barbecue to the cancellation of the final day of ACL Festival:

– Chef and TV personality Andrew Zimmern has partnered with New York butcher Pat LaFrieda on a new line of sausages.

– Pizza and Texas barbecue combined at a new joint in Los Angeles.

– When Riley’s BBQ closed in Blanco, Texas the town was left without a barbecue option. Now Texas Old 300 BBQ has opened recently in the building last occupied by Riley’s.

– The 26th annual National Championship Barbecue Cookoff will be held at Bosque Bottoms in Meridian, Texas on 10/26. Around 200 teams will compete.

– If you’re in Seoul, Korea tonight and have a hankering for Texas BBQ, here’s a tip:

My BBQ is back at Maron Kitchen And Bar @Maron_Seoul tomorrow from 6pm! Come and get a taste of Texas! pic.twitter.com/8ZhumpG1Rc

– A Chicago BBQ joint will donate 100% of the year’s profits to charity.

– A new BBQ joint in Boston called Slow Bones will open soon. It’s from one of the co-founders of Boston Market, and has no relation to Dallas’s The Slow Bone.

– A barbecue joint borrows a smoker for three years. Previous owner reports it stolen when he decides he wants it back.

– A barbecue joint in Coeur D’Alene, Idaho was broken into and thieves got away with $450 worth of raw brisket and ribs.

– This isn’t really about barbecue, but if you’re in San Antonio tomorrow you can get a gargantuan pork chop at Perry’s for $0.79.

– Journalist Christina Sterbenz give seven reasons why she chooses to eat meat. Reason #2 is ribs.

– Beef prices are going up, folks.

– But, if you think that the cost of meat suffers form dramatic swings, just look as this graph from the UN’s Food and Agriculture Organization. Meat costs have held pretty steady compared to other agricultural products: 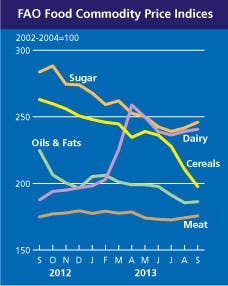 – President Howard Taft was a large man, but he lost eighty pounds on a special diet that included beef tea at lunch.

– A candidate for mayor in Calgary, Alberta skipped out on the only debate of the race to compete at the American Royal barbecue competition. He ended up placing 164th out of 174 teams, but he’d still get my vote.