Bryan Mahoney was a catering veteran with a barbecue itch. When Dylan Johnson, the co-owner of Milo’s Bar in Arlington, called about a potential partnership for a bar and barbecue joint in Dallas, Mahoney was in. They opened the doors to Dylan’s Barbeque Saloon nearly a year ago, with Johnson running the bar and Mahoney manning their new custom-built smoker.

Dylan’s Barbeque Saloon sits along the busy Northwest Highway, west of I-35, just before the turn-in for the male dance club LaBare. There’s a “barbeque” sign above the door to the pit room, which they built at the front corner of the building, but the main door is around the side. The place has a long bar and a large dining room with a nostalgic look, thanks to the furniture salvaged from the old Trail Dust Steak House that was down the street. That’s just part of the transformation that took this place from honky-tonk (it used to house the Top Rail Ballroom) to barbecue joint.

The barbecue counter is contained within a room to the left of the bar. There are plenty of meats to choose from—all chopped right in front of the customer—and even more sides. The popular Tipsy Chicken was already gone at 12:30 on my first visit, so I arrived earlier the next time. A generous half chicken was included in the combo plate, so I had leftovers of the moist, smokey bird with crisp skin. Mahoney says it’s soaked in a low-salt brine using Robert Earl Keen Honey Pils beer as a base, but I’d say he needs to up the salt in the brine or the rub. 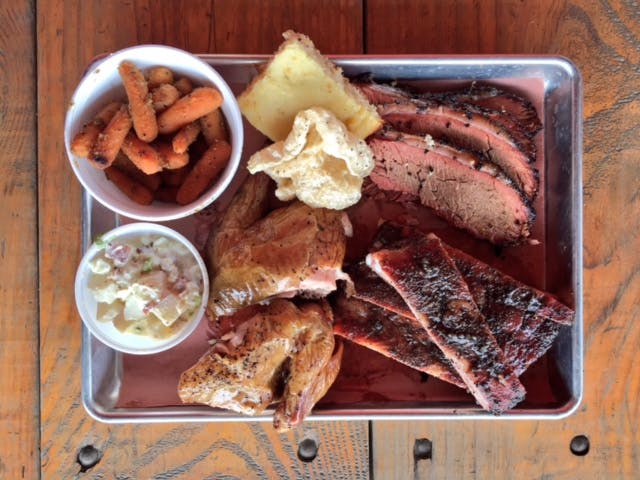 The St. Louis-cut pork ribs had plenty of seasoning and smoke, but the doneness was uneven on two visits. On the second visit they needed more time on the smoker, while the ribs pulled easily from the bone the first time around. The sausage isn’t homemade—it’s the green onion variety from Country Pleasin’ in Jackson, Mississippi—but it’s juicy with a little spice and plenty of seasoning. 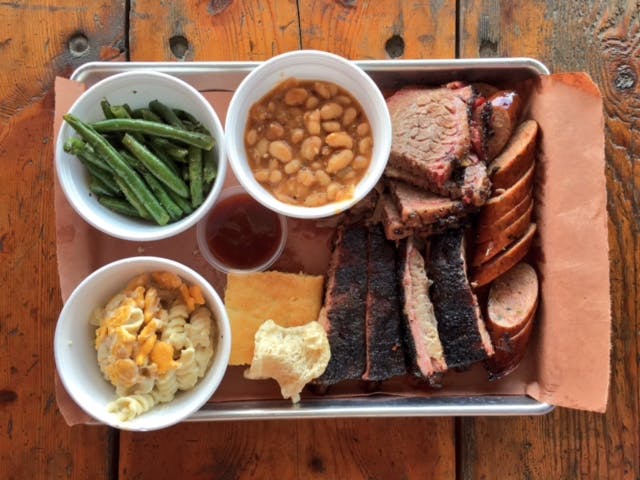 Mahoney said the menu has evolved quite a bit in the past year, but the brisket has gotten the most attention. They started out with Select briskets and have now moved to Certified Angus Beef. Briskets on both visits were moist and tender. I wasn’t given the option of fatty or lean either time, so speak up if you have a strong preference. The fatty brisket on the first visit had a great peppery bark, as did the lean from the second. That lean brisket was overcooked and fell apart too readily, but it had great flavor.

I enjoyed the pulled pork least. The chopped and sauced meat was held in a steam table, so a sandwich was like a wet sloppy joe, though served on a good grilled bun. All the sandwiches are regularly $8, but Mahoney said he makes an effort to provide an affordable lunch deal. Most days at least one sandwich with a side and drink will sell for just $7 at lunch. 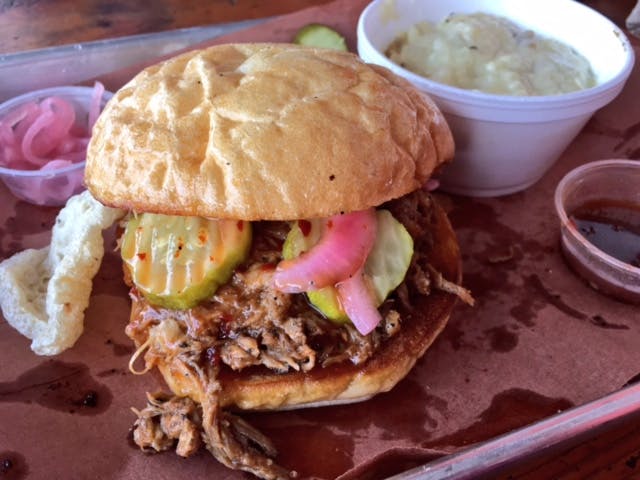 Minus the frozen fried okra (which was actually pretty good), the sides are homemade. There are fresh green beans and an excellent potato salad with a hint of mustard. Burnt-end beans are meaty and savory, and I also enjoyed the jalapeño creamed corn. A tongue-in-cheek garnish of Goldfish crackers atop the White Trash Mac would have been funny if they hadn’t been so soggy, and I could barely taste the carrots beneath the heavy seasoning. Any side missteps, however, were remedied by the freebies that come with every meal. Instead of white bread, there’s a portion of sweet cornbread. Then, a fresh-fried pork cracklin’ (or two) tops the platter. I’ll take that over pickles and onions any time.

Dylan’s is a work in progress. Neither partner had barbecue joint experience, so they’re figuring it out as they go. (Although starting off with a wood-fired smoker was a great first step.) Now, a year into it, they’re showing some real promise in a neighborhood where it can be a challenge to draw a crowd. And that’s exactly what they’re trying to do next week when they roast a whole hog for their one year anniversary on September 17. Hopefully there will be plenty of those cracklins to go alongside the meal.