Restaurateurs dismissing the use of all wood cookers saying “the city won’t let us cook with wood” no longer have an excuse, at least not in San Antonio. Just beyond a low counter that they call the altar at El Machete, there’s a crackling mesquite fire, the flickers of which you can gaze at from the dining room. There’s a commercial kitchen hood above, and animals speared onto rebar in between. This is barbecue in the style of South Texas and Northern Mexico. It’s not smoked or grilled, but wood and fire are essential. 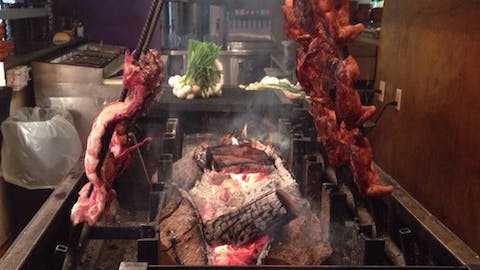 Cabrito Estillo Norteño is the specialty of the house, and is only served at dinner. In the traditional preparation, an entire milk-fed kid goat is splayed above the fire and slowly roasted until the skin is crisp and the meat is pull-apart tender. In South Texas you’re likely to find the grills and kids goats displayed through large windows looking into the kitchen, and an order usually consists of 1/6th of the cabrito. At El Machito they serve a full quarter cabrito to diners. This means everyone gets some of the ribs and loin. It also means a whopping $58 price tag.

I was told by the staff that the cabrito service began at 5:00pm. I arrived at 5:10 but they seemed unprepared. Granted, it was a Monday, but there were no cabritos roasting above the fire along with the chickens and pork ribs. A discussion with the chef later confirmed that it takes about three hours over the mesquite fire to get one of the cabritos tender, and that once an order comes in, the cabrito is taken down off the rods and portioned out before a final crisping on the grill. There was no cabrito cooking over the fire the evening of my visit. Instead, the wait staff had to pow-wow with the kitchen staff to confirm that any cabrito was available at all. 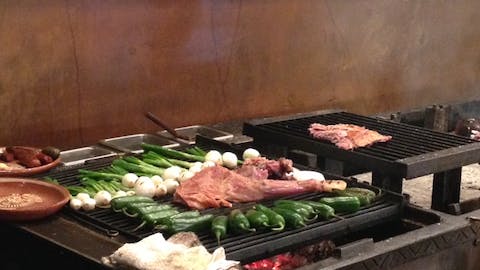 After several minutes a hindquarter appeared from the kitchen (if asked I would have requested a forequarter), and it was placed directly on the grills grates along with onions and peppers. Despite a lengthy phone conversation afterwards, I couldn’t get confirmation why my cabrito wasn’t cooking over the coals at the the beginning of dinner service, and a follow-up email went unanswered. Maybe it was par-cooked in another way, or maybe leftover from the previous day. I don’t know, but it wasn’t ideal. Twenty minutes after it came out of the kitchen, the cabrito was off the grill and on my table. The presentation was colorful, and the large platter struggled to contain all the meat. 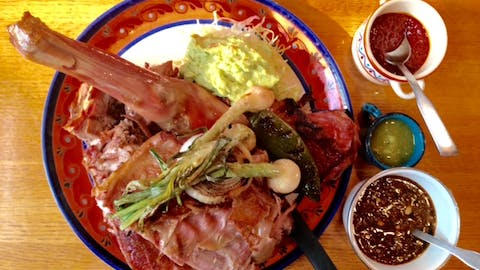 When I mention cabrito in larger discussions about Texas barbecue, I often here groans of uncertainty. Not so much about the preparation method, but the meat itself. Eating goat still seems odd for a lot of Texans. Some won’t even consider red meat beyond beef and pork, but others maybe had a bad experience, or their meal was from an older, grass-feed goat mislabeled as cabrito. Kid goats can become gamey really quick once out to pasture, which is why I tell skeptics to find a place serving actual cabrito before solidifying a lifelong opinion. While I don’t question that El Machete was using real cabrito, I’m not sure the finished dish would have converted any doubters on this day.

There were wisps of flavor from the fire, but they were fleeting. Less than thirty minutes on the grill grate does not barbecue make. It was also tough. The thin ribs and loin were fine, but a boning knife would have been more appropriate for separating the meat from the leg bone. This for a dish that you should be able to pick apart with your fingers if so inclined. It was enough meat for tow or three people, but the high price tag still stung.

The disappointment may have been heightened by what was a memorable lunch earlier in the day. In fact, it was the quality of the ribs, chicken, and sausages at 11:00 that brought me back here just six hours later. 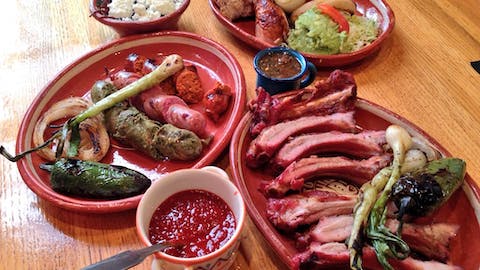 The pork ribs could not have been less complicated. Whole racks of baby backs are brined, threaded lengthwise over the steel rods, and cooked above the fire for two hours. There’s no secret rub, no mop, and no sauce. The flavor was of pure porky essence. The surface was crisp, and the meat was tender. It took little effort to get those bones clean. Cooking baby backs so quickly is a good way to dry them out, but the brine worked beautifully to keep them moist. It was so simple and so successful that I’m going to have to try it at home. 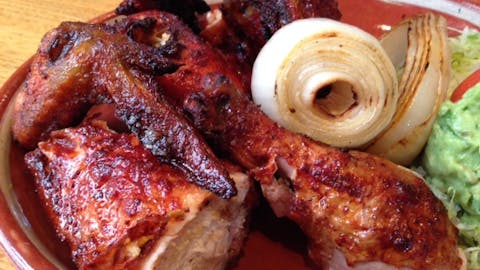 Half chickens are also roasted in a similar fashion to the ribs. They get a heavy dose of chiles and other spices before getting a ride on the spit. The skin was crisp, and even the white meat was still juicy. All that was missing was a little salt. I’d suggest pulling the meat from the bone and rolling it up in one of the house made tortillas with a generous scoop of the charred salsa.

There are also three house made sausages. The firm texture of the beef loganiza was a sharp contrast to the much less cohesive pork version which I preferred. A heavy dose of chiles gave the pork sausage a deep red tint and nice level of heat. The verde sausage with poblanos was equally enjoyable, and pumpkin seeds provided a pleasant crunch. 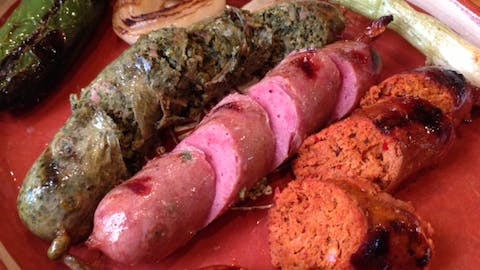 With such a great meal for lunch, it easy to assume that the Monday evening cabrito was an anomaly. If so, it was an expensive one at that. I hope my description doesn’t dissuade you from trying cabrito if you haven’t already, but if you’re going to try it at El Machito, look for the cabritos getting crisp over the fire before making your investment.