Just before the Texas Monthly Barbecue Festival, I met up with John Morthland at Franklin Barbecue to talk barbecue and get some breakfast. I knew I’d be stuffing myself silly in an hour or so, but I can’t rightly pass a chance to get some of Aaron Franklin’s brisket when I’m mere minutes away. A line had already formed fifteen minutes before opening on Sunday morning, but the line moved quickly once the gate was slid open. With two combo plates between us, John and were able to sample all four meats. 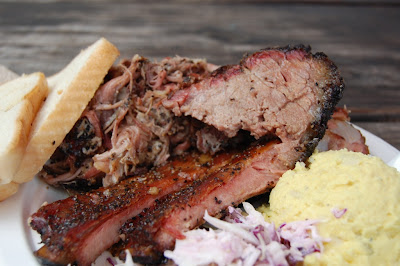 Just watching the brisket being cut here is like having a preview bite. I’ve seen so many sad-looking slices of smoked beef that I can already tell if it’s going to taste bad. On the other side of the spectrum, with the smell and the dripping juices, I felt like I could taste this stuff just because it looks so damn good. Thankfully I got a real live taste, and it was glorious. The fat at the end of the thick slice had melted into the peppery rub to create an airy, juicy, salty flavor bomb of a bite. Every bite thereafter was perfectly smoky and silky tender with plenty of rendered fat to keep things well lubed.

Aaron is no less talented with his pork. The salt and pepper rub on each rib acts as the natural compliment to the smokiness that permeates the meat. The ribs are well cooked with a level of tenderness where just a slight tug is required to release meat cleanly from bone. Pulled pork has even more intense flavor. A mixture of pork, fat, crust, and a finishing sauce create the right balance of flavors. It’s moist without being soggy and has just the right touch on the seasoning. I kept shoveling forkfuls even after I’d determined to save room for the meat coming at the festival. 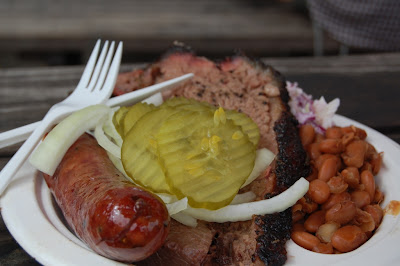 The sausage is made by the Texas Sausage Company, in Austin. After trying dozens of homemade sausages in the area, this one had a flavor I just couldn’t pin down. The juiciness gave away the high level of pork, and the flavor of beef was evident, but there was a richness that I could only equate to organ meat (I guessed liver). Aaron Franklin confirmed in an email conversation that he has them add some beef heart in there for the added twist. This surely doesn’t please every palate, but I find this bold move a good way to make a personal mark on the local sausage scene. Aaron also mentioned he’s still not satisfied with the grind, and they’re trying to work out that final kink. Still tweaking in pursuit of ultimate perfection.

Over at the festival, John and I tried and tried to find a sample that matched the quality at Franklin. I know they were all cooking remotely at the Long Center, but even the best of the best in Texas could not surpass what that little trailer can put out, and it’s that good on every visit. Based on such high quality and dogged consistency, this is nothing short of the best brisket in Texas.

With all the success, and the growing lines, I had to ask when the expansion was coming. Aaron’s quick response was “Actually, I’m welding on the new smoker right now. Should be ready next week. And we are planning on being in a building by the end of the year! That trailer was a great way to start but it has really become a limiting factor. I can’t wait to make things bigger, better, easier, and more consistent.” Now that’s what a dedicated pitmaster does on his day off, but I’m not sure there’s much room for improvement.