Barbecue and pizza are two items that usually don’t join forces on a restaurant menu, but in the East Texas town of Daingerfield they’ve come together at Fran’s Barbeque and Pizza since 1971. Fran’s is named for Frances Neely. She was married to Dick Neely, and worked at the storied Neely’s in Marshall serving Brown Pig sandwiches. She took the recipe for the famous sandwiches to Daingerfield, and then she added a pizza oven.

There’s a full barbecue menu, and a full pizza menu, but I went right for the Brown Pig sandwich. Just like the Marshal original it features smoked, chopped, and sauced pork, iceberg lettuce, and mayonnaise on a toasted bun.

Having just eaten at Neely’s in Marshall before this visit, I think I prefer their more finely minced version of the Brown Pig, but they don’t have a pizza oven in Marshall. Fran’s Brown Pig pizza starts with fresh dough, tomato sauce and mozzarella cheese. Then, smoked pork and barbecue sauce are added.

Maybe a Brown Pig pizza’s description doesn’t make your mouth water, and I empathize, but it actually works. The finished product tastes a lot better than it sounds. If it were all barbecue sauce it would be overwhelming, so the tomato sauce helps balance it. Then the cheese binds it all together. It’s a good slice of pizza, plus barbecue. 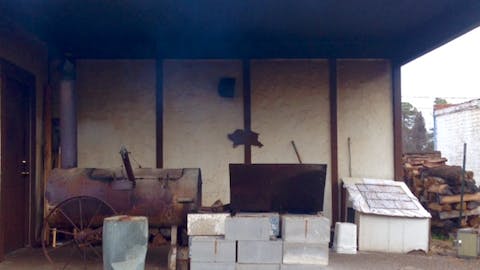 And if you’re wondering about how the pork is prepared, you just have to swing around to the back of the building. There you’ll find an old pit bellowing smoke and a big stack of hickory. This is honest smoked pork, which is a lot more than most pizza joints can say for their barbecue pizza varieties.