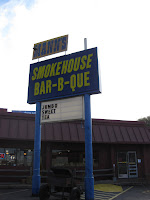 A spot in Texas Monthly‘s Top 50 brings high expectations, so my mouth was watering after the disappointment at Texas Rib Kings down the street. Tuesday-Friday 11-3 were the temporary hours posted at the door, but there was no indication of the timeline for these hours. Upon ordering I was pleased that the pit boss quickly asked if I wanted lean brisket or “some with a little more flavor.” I opted for the fatty brisket as well as two enormous spareribs. As I paid the hefty total, the cashier offered me some complimentary strawberry ice cream . . . nice touch. As I settled in, I could smell the meat through the foil it was wrapped in. The brisket was outstanding with a deep black crust, a nice smoke line, and wonderful smoky flavor throughout. The fat was well rendered, and the meat was tender and moist. This was just what I needed to restore my faith in Austin BBQ. Then I tried the ribs. What a disappointment. The meat smelled and tasted as if it had been stored in a steamer beyond its taste limit. The meat fell from the bone and the fat was well rendered, but the smokiness and overall flavor were missing. Usually a joint that can nail a brisket doles out good ribs without breaking a sweat, but not on this day. At least I got to finish it off with some free ice cream.