This is not a barbecue joint. As the name suggests, they specialize in smoked meats, which are mostly piled in a sandwich. If you come to One90 Smoked Meats looking for a combo plate with slaw and beans on a plastic tray, prepare to be disappointed. But if you’re happy with a fantastic smoked meat sandwich that features lots of bold flavors, then you’re going to want to eat here as often as I do.

Just a couple miles from my house in Dallas, I had hopes for One90 to become my new neighborhood joint when I heard it was opening last year. Much of the business is centered around smoked meat available in chilled Cryovac pouches that can easily be warmed up at home in a simmering pot of water, but that’s not my bag. And when my first visit included boring versions of brisket sandwiches on cheap white buns, I nearly wrote them off for good. I wanted hot barbecue, or at least a good sandwich for lunch. But after an almost complete revamping of their menu a few months back, One90 became my new favorite sandwich shop in town.

Owners Kyle St. Clair, Adam Weatherread, and Herman Guerra went to Dallas’s Bryan Adams High School together, but went off to college to pursue careers in law and law enforcement. When St. Clair moved back to Dallas, he moved in next to Guerra. They started cooking together and selling vacuum-packed barbecue out of St. Clair’s garage, but they didn’t know anything about the restaurant business.

They dove in anyway. St. Clair said the Health Department gave their small space (there are just six stools at a counter along the window) the all clear, and they opened quietly with some brisket and pulled pork on cheap white buns, which were the subject of initial scrutiny. The owner of Kozy Kitchen asked about their bread supplier, which at the time was Mrs. Baird’s. He told them that was a “big mistake,” and left them with the number to a bakery. St. Clair remembered that the whole exchange was “a little offensive,” but now wants to thank him. A week later, their regular buns were getting torn up after toasting. “It all hit me at once that we were screwing up bad,” he said. He tracked down the bakery, La Francaise in Garland, and One90 now has great bread for their sandwiches.

Oh, the bread. Smoked beef tenderloin ($15) is sliced thin and piled high on a brioche bun with jack cheese and a generous helping of grilled onions. It was the sandwich I wanted to order every time, until I tried the ham and cheese that is also on brioche. They cure and smoke the ham from hogs they get at Restoration Homestead east of Corsicana. Rather than deli-style, it’s sliced thick, and Swiss cheese is melted overtop. Ask for the pickles on the side, and ditch the mayo for the creole mustard. It’ll be your new favorite.

Speaking of curing, they do a lot of that in house: Guerra has been experimenting with jalapeño bacon and smoked duck confit, and they’re looking to move other methods in house too. The standard bacon on the BLT is fantastic, but the bread to bacon ratio is too high. Guerra, who was finally able to quit his day job two months ago, said they’ll soon be doing the slicing themselves to better control thickness. The same toast works just fine with the heartier portion of cured duck breast on the D(duck)LT sandwich.

Beef eye of round is their choice for pastrami. It’s not the standard cut, but the lean beef sliced thin works well on the sandwich referred to as The Melt. It’s not a very descriptive name, but in fairness it was just added to the menu on Monday. (Maybe it’ll be called pastrami by the time you get there.) The sandwich is worth a try, but the meat is pretty salty, as are the pickles. Get them on the side, and again, ask for some mustard, maybe the jalapeño version this time. I also loved that condiment paired with their poblano cheese sausage, which is also made in house.

They farm out a few of the other sausages to Rudolph’s Meat Market, which is also where they get their hot dogs. The hot dog, another brand new menu item, is smoked before being topped with brisket chili, cheese sauce, bacon sprinkles, and chopped fresh jalapeño. It’s hard to describe how good it is, but let’s put it this way: I had no intention of finishing it, and it was gone before I could stop my mouth from chewing. It’s like getting nachos, Frito pie, and a dog at the game, all together without the chips. 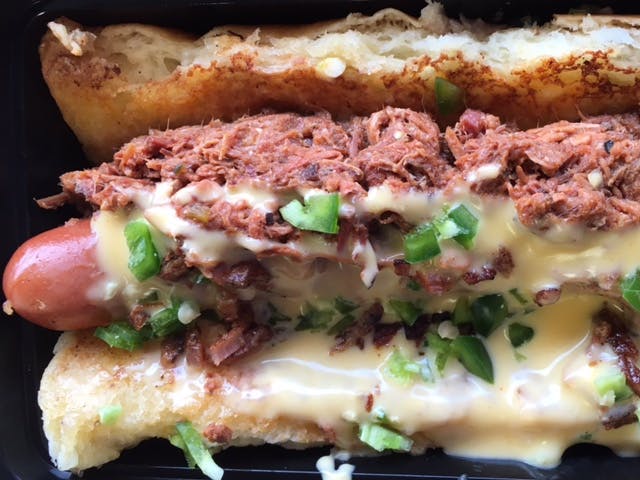 All of the meats are smoked with pecan and oak, cooled, sliced, and packaged into plastic. Whether you take home packaged meat from the case or eat it in the shop, it all comes out of the bag. For the sandwiches, everything is portioned and bagged, and heated up in water or on the grill. It’s not the kind of method that makes for incredible pork ribs (though they’re not bad) or spectacular smoked brisket. But put the brisket on a bun with roasted poblanos and melted cheddar, and you’ve got a winner.

They do have some issues. First, I’m opposed in principle to the smoking offset pit out front. It might not be intentional, but it essentially amounts to false advertisement, because nothing is cooked out front. It’s all done in the Southern Pride in the kitchen. Beyond that, my only quibble is with the smoked pork loin. By itself or on a sandwich, it’s simply boring, and hard to recommend with so many other exciting meats to choose from. I did enjoy the tacos, especially the smoked salmon and smoked chicken, but the tortilla quality doesn’t match the great sandwich breads.

Guerra confided in me some of the frustrations of running a barbecue business in Dallas: “People come in and tell us we need to do a stuffed baked potato, but we don’t want to be like every other barbecue spot.” And they’re not. At One90 you can try something new that’s not offered at most other barbecue joints, because it’s not a barbecue joint. It’s a smoked meat sandwich shop. And you should be jealous that it’s in my neighborhood.