I’ve asked myself three times over the last three weeks if I should drive an hour from my home to visit ShaneBoy’s Craft Hawaiian Grindz, and every time, the answer has been yes. Specializing in Hawaiian barbecue, this truck sitting next to a fireworks stand in a gravel lot in tiny Rendon is one of the best food trucks in Texas. Most of its meats are grilled and fried, but enough of the menu is smoked that, in the aloha spirit, I’ll also call it one of the best new barbecue restaurants in Texas.

I got lucky on a Tuesday afternoon to find both ShaneBoy’s and Wing Man, its sister (brother?) food truck, open together. The former is normally open Wednesday–Sunday and the latter Friday–Sunday, but after losing a week of business thanks to last week’s winter storm and fixing some busted pipes, owner Shane Sutton decided it was worth his while to make hay while the sun was shining. Dayne Weaver of Dayne’s Craft Barbecue in Fort Worth agreed and was waiting for his order when I arrived with my two kids.

Before we get into the details of the food at ShaneBoy’s, it’s important to understand a bit about Hawaiian barbecue. “We call it a plate lunch back home,” says Sutton, who was born on Oahu. A plate lunch comes with a green salad, white rice, and a creamy macaroni salad that Hawaiians simply call mac salad. “That’s the default,” he says. “No matter what, that’s what your plate comes with, and [you] choose your protein.” It’s that last bit that can be disorienting at ShaneBoy’s because there are so many protein options—but the menu didn’t start out that way.

When ShaneBoy’s opened in September 2019, the menu included only brisket, pulled pork, coconut fried chicken, and Hawaiian grilled chicken. A year and a half later, the pulled pork is still there. Sutton smokes it in a pellet smoker until he gets the right color, then roasts it until tender and shreds it. It’s fine, but also the least interesting protein they offer. Since this is Texas, brisket was an obvious choice for Sutton, but you might not recognize the way he serves it. The pulehu brisket, which is now served as one of many rotating specials, starts off as a smoked whole brisket. Then it’s chilled and cut into cubes that are about a quarter the size of the average burnt end. “Pulehu” in Hawaiian means “quick-charred” or “seared,”  so, as Sutton explains, “I get my flattop smoking hot and char [the cubes]” before adding some of his signature aloha sauce. Think of pulehu brisket as Hawaiian burnt ends.

The aloha sauce, a fruity vinaigrette with soy and ginger, comes with just about anything. For the firecracker sauce, Sutton adds enough spice to turn the pale green sauce to bright pink. The spicy sauce is an old recipe of Sutton’s from his time as the chef at Little Buddha in Las Vegas, where he worked for five years. While his culinary career began in Honolulu at Le Guignol, he and his family moved to the mainland for a corporate chef position at AMC to develop the dining in the cinema suites for their theaters. It paid well, but he wanted to get away from a world where, as he describes it, the attitude is “Let’s get the cheapest stuff, let’s mark it up, and let’s make a profit.”

“Food trucks are the name of the game out there,” Sutton says, recalling plate lunch meals and huli huli chicken on Oahu’s North Shore. After moving to Texas in 2010, and he wanted to get back his roots. His wife Meagan agreed, and they quit their jobs and renovated a food truck they picked up in Pecos to open ShaneBoy’s. When a friend in Rendon offered them a lot to park in, he told the couple as kindly as he could, “‘We’ll give you free rent because we don’t think you’re going to make it,'” Sutton recalls. After navigating a pandemic and getting beyond a (hopefully) once-in-a-lifetime winter storm, the couple has confidence in the truck’s staying power. And besides, the family really depends on the place. Sutton’s two sons, Dylan and Sean, are both full-time employees, after losing their car dealership jobs last year because of COVID-related cuts.

Dylan and Sean handle most of the cooking inside the truck, which includes specials like kalbi beef ribs, thin-cut flanken-style short ribs that are marinated and grilled to order. “Hawaiian barbecue is big on marinades,” Sutton says. Here, they include soy sauce, ginger, garlic, and sesame oil. They come through boldly on the Hawaiian grilled chicken, which uses juicy strips of chicken thigh. The beef is so tender it will have you checking the ShaneBoy’s Instagram feed for daily menu updates. 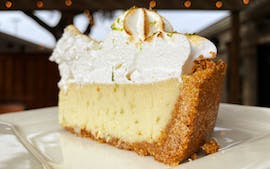 The rest of the proteins are fried, but not in a heavy batter. Chunks of white meat chicken or shrimp are coated in coconut flour that Sutton makes himself from dehydrated coconut. They’re all gluten- and egg-free. I loved both the chicken and shrimp done firecracker style, which means coated in the spicy sauce, but you can also opt for the more potent lava style or a more tame garlic butter version. If you want an egg, you can add a fried one to any plate. The thick loco loco burger patty already comes with one on top, along with some of that pulled pork.

Even with all these protein options, ShaneBoy’s doesn’t do platters. Instead, all proteins come plate lunch style in a styrofoam container, with a fresh green salad and vinaigrette. You can add slaw or mac salad (I much prefer the latter) to any plate. The bulk of the meal is made of fluffy white rice with some aloha sauce and furikake, an umami-rich dry seasoning, sprinkled over top. The proteins rest on the rice, and all are cut into bite-size pieces, making it easy to get a little meat and rice in each bite. This where the experience of Hawaiian barbecue diverges from Texas barbecue. All the flavors in Hawaiian barbecue are meant to be mixed up and consumed together, with a fork. It’s not about a single bite of unadorned sliced brisket, pulled apart with your fingers. Maybe this mix of bold flavors and varying textures is what got me so excited about eating a plate lunch at ShaneBoy’s, or maybe I just really like sauce.

For an experience more similar to Texas barbecue, you can always order from the adjacent Wing Man truck, where you’ll find Sutton cooking. All the wings are brined and smoked, then fried to order. They’re served in their own sort of plate lunch style, with a half cob of deep-fried corn and fresh cut fries, no fork required. Sutton fries the potatoes twice, so they’re super crisp on the outside and fluffy inside. The wings are also crisp, thanks to the their small size and the fryer they cook in. I don’t mind a small wing, because I like the extra surface area for sauce, but maybe order two more than you think you’ll want. When my son exclaimed, “This is the best chicken I’ve ever eaten,” I swallowed my pride and ordered him four more of the Hawaiian-style wings coated in soy, ginger, garlic, and sesame oil with sesame seeds sprinkled over the top. I also loved the buffalo wings with a blue cheese sauce drizzled on. I tried six flavors—it’s hard to go wrong.

As the name suggests, Sutton is really serving up the grindz. “Grindz in Hawaii is really good food,” he says. It’s like saying someone’s food is “the bomb” or, if you’re from Gen Z, “fire.” I asked Sutton what it’s like being an ambassador for Hawaiian cuisine in a food truck so far from any shore. “You can share some of that aloha spirit,” he says, which to him means, “treat people the way you want to be treated.” And the location, though remote, has its advantages. “If you do something unique, especially kind of in the middle of nowhere, it makes it even more intriguing.”