Last year, Chad and Jessica Sessions bought a flat-bed trailer and a barbecue pit in the hopes of making their mark in the barbecue business. They spent a year welding and hammering the body of a food truck on top of that flat bed, while Chad honed his smoking techniques. When it was finished, Jessica left her job at a check-cashing store, and Chad called it quits at Little Caesar’s Pizza. They towed their Smoke Sessions Barbecue trailer to the parking lot of Holt Ranch & Feed Store in Royse City in May, and began selling some of the best barbecue in North Texas. Trading Hot-N-Ready for low-and-slow has never tasted so good.

Chad Sessions, a Rockwall native, didn’t have the barbecue bug when he moved to San Marcos in 2006. His life changed soon after with a visit to Smitty’s Market in Lockhart. He was enamored by “the fire on the floor, the soot-covered walls, seeing the meat sliced right in front of you, and served on butcher paper,” and was determined to cook his own. Smoking meat at home didn’t start off well. “I’d cook these briskets that tasted like an ashtray,” he tells me with a laugh. “I had a backyard grill and I’d start a tiny fire in the corner.” At the time, he thought it was decent barbecue, and so did his friends and family.

The family may have gotten too confident in Sessions’s cooking ability. He came back home to Rockwall for Thanksgiving one year and his dad had an offset smoker in the backyard. Surely it would be easier than his tiny grill. Sessions was so confident, the family decided to skip the turkey and just serve smoked brisket. “It was terrible,” Sessions confesses. After smoking it for fifteen hours, all through the night, he was ready to be the dinner table hero. “I sliced through the middle and it was a nice medium,” he says. “It was still pink.” The double whammy was that it was too spicy and salty to eat even after some more time in the oven.

Sessions kept practicing, and eventually bought a new smoker. It was big and required a lot of wood to fire up. Too costly to fuel just for his briskets, he’d load it up with meat from friends and smoke it for them for a small fee. Before Sessions thought he was really ready to cook for the public, his local Masonic Lodge asked him to cater a banquet for 250 people. He accepted the challenge, and bought a new pit. He smoked twelve briskets. “Everybody loved it,” he says. His phone kept ringing afterwards.

The Sessions left San Marcos and came back to Rockwall last year. New customers find their food truck, a forty-minute drive from downtown Dallas, every day. Smoke Sessions Barbecue officially opens for dinner from Tuesday to Sunday, but word of their barbecue has begun drawing weekend crowds too big for their 250-gallon smoker to serve, so it’s best to plan for the lunch hour, or call ahead. As for what to order, it’s hard to choose.

The pulled pork is good as a sandwich filler. They’d like to grill the buns, but don’t currently have the room for the griddle. The meat is juicy, and pairs well with the tangy tomato-based sauce. For more pepper and smoke, try the moist slices of smoked turkey or one of the tender spare ribs.

The sausage is a bargain at $4 for a hefty-sized homemade link. They have great snap and smoke, and the filling is juicy and pleasantly salty. It’s a basic sausage, but a well-executed one.

The prize of the menu, however, is the smoked brisket. Seasoned with just salt, pepper, and smoke, it’s alluringly austere. Oak smoke lends a sweet and bold smokiness to the meat, which isn’t wrapped during cooking. Each slice had exemplary tenderness. Quite simply, Chad Sessions smokes an incredible brisket. I skipped a planned second lunch after polishing off everything on my first trip. I didn’t even bother planning a second lunch when I headed out for my second visit. It was that good.

The sides are better than average as well. Potato salad gets some punch from fresh jalapeños, cilantro, and onion. Brisket and serrano peppers fortify the pinto beans, and the mac & cheese uses a blend of four cheeses. Once mixed, the pans go into the smoker to grab a hint of oak smoke.

Sessions is talented, and also self-taught. He read blogs and cookbooks while he practiced his craft, and he watched lots of barbecue videos, or as he calls it “YouTube University.” When he bought the Franklin Barbecue cookbook, it gave him hope that he could pull off his dream. “After I read the biography portion, I thought, this was the story of my life,” he tells me. Who knows if the rest of the story will mirror Franklin’s, but Smoke Sessions has already seen enough growth to order a new pit, which arrives in a couple weeks. It’ll quadruple their pit capacity. Something tells me they’re going to need it. 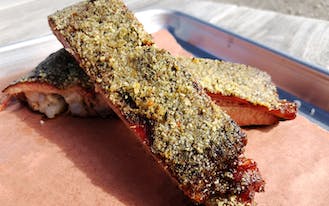