Scott Moore wanted to make tequila, but you can only call it “tequila” if it’s made in Mexico, and there is already plenty of competition on the store shelves. So he settled for chocolate. The availability of good chocolate was a different story in 2011 when Moore and his partner, Michelle Holland, founded Tejas Chocolate, Texas’s first bean-to-bar chocolate company.

Just like barbecue cooked low and slow with wood, bean-to-bar is the hard way to do things in the chocolate world. Dried cocoa beans have to be roasted (Moore uses a propane-fueled brick barbecue pit), processed, and mixed with a little sugar before being made into bars or truffles. That’s simplifying things a bit, but suffice it to say that’s it not an easy business to jump into. It’s a unique challenge that might sound familiar to barbecue joint owners.

For me, it’s hard to find a better professional rush than finding great barbecue in unexpected places, and what would be more unexpected than a chocolate factory? When Tejas was making plans for a retail outlet of their own, they figured they should offer something for lunch too. And according to Moore, “barbecue was really the only choice.” After renovating the oldest building in Tomball—northwest of Houston—they enlisted the help of chef Greg Moore, Scott’s brother, and purchased a barbecue pit from a competition team that dissolved.

The brothers split the responsibilities on the pit. Greg works nights and Scott takes the day shift (though both were there during a late lunch), which means the is only left alone pit for an hour or so in the middle of the night. As Scott reminds me, “It’s a manual stick burner. It needs attention.” That attention shows in the barbecue.

Barbecue availability doesn’t really match the hours of the chocolate shop. At 2:00 on a Saturday afternoon the pork ribs were gone. By the time I left an hour later, after an impromptu tour of the chocolate operation, the brisket had been gobbled up.

My slice of brisket came from the last of the day, and was tender and smoky. They use an upper choice grade brisket, and it shows in how moist it was. The flavors were clean too. “Brisket and beef ribs are pretty much salt and pepper,” Greg explained. And a dip into their house mole barbecue sauce (made with Tejas Chocolate, of course) makes you wonder why they bother with a tomato-based version.

The other beef option is the mini-beef rib. Instead of a monster portion that cost $25, they have their beef ribs pre-cut across the bone into smaller strips. This gives you the option to get a taste of the rib for $8 without committing to a whole one. It also affords more of that perfectly formed bark. With exemplary texture and juiciness, it was my favorite item on the menu. 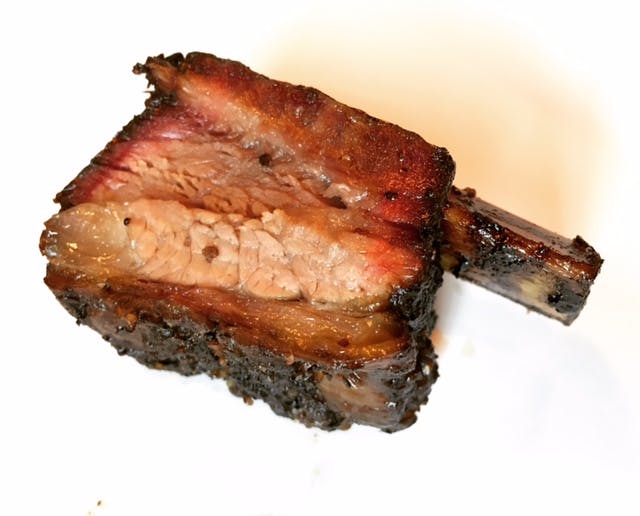 With all the chocolate making and barbecue smoking, the brothers haven’t found the time to make their own sausage, so they get garlicky links of Fontanini. Scott couldn’t recall the variety, but my guess is that I was tasting the linguisa, which made for a nice link after the addition of some oak smoke. The pulled pork was fine, but benefitted greatly from the addition of their green tomatillo sauce. It’s tasted like a cross between salsa and barbecue sauce with mild heat, and goes great on the turkey too, but the peppery slices didn’t need them. They were stellar on their own. 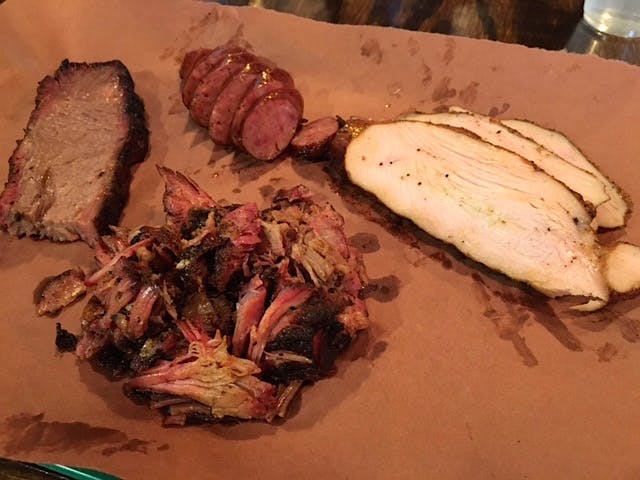 The pork would probably be better in sandwich form. Tejas uses good, buttered and grilled rolls for their sandwiches. I tried the Brisket & Blues, which featured chopped brisket, tomatoes, onions, and blue cheese. I appreciated the creativity, and it was a great sandwich. Even so, I couldn’t help myself from adding a little more green sauce. 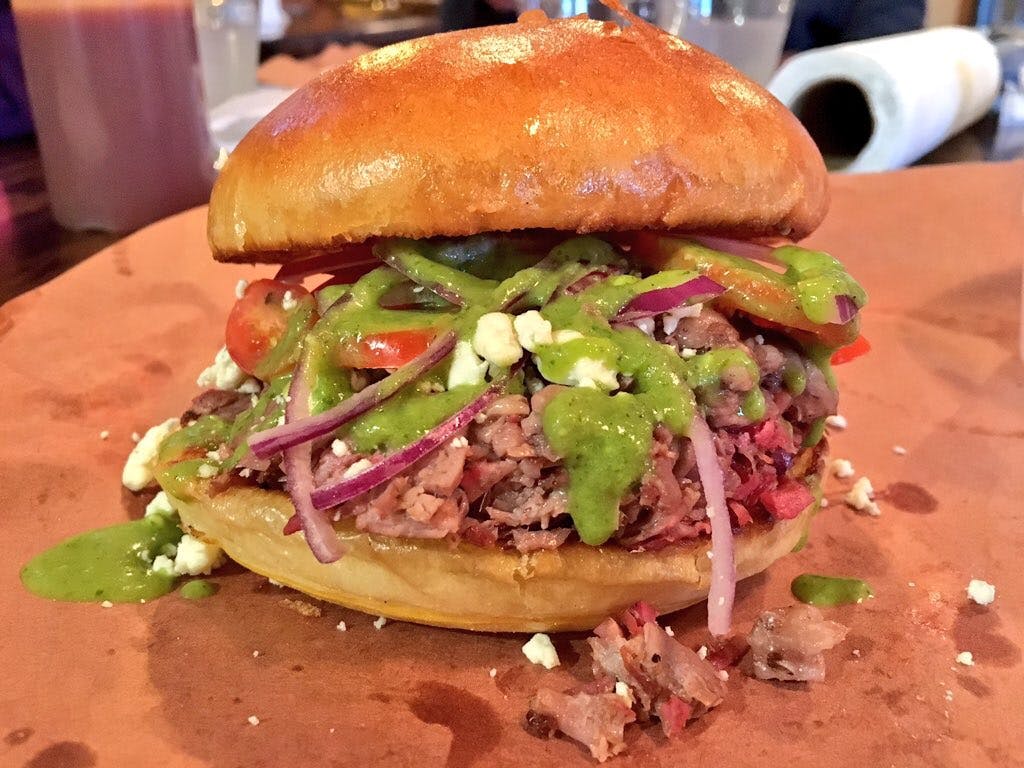 After learning that Michelle Holland was responsible for the carrot soufflé recipe, my six-year old gave her a hug. It’s a mix between vegetables and dessert: think carrot cake meets flan. Of course there were plenty of other dessert options including chocolate bars, a variety of chocolate truffles, and a creamy drinking chocolate. The chocolate panna cotta was gone, but the chocolate bread pudding (are you catching the theme?) stood in nicely. I even drizzled a bit of the mole sauce over the last few bites, and would do it again.

Neither Scott nor Greg had worked in the barbecue business before this venture. Scott cooked on his Weber Smoky Mountain in the backyard, but that’s not adequate preparation for running a commercial smoker full of briskets. Just three months after opening the doors, I’m amazed at how good the barbecue is already. Tejas Chocolate has a modern story of developing a barbecue menu with a leg-up from books and Internet instruction—they credit Aaron Franklin’s book and YouTube channel for providing a good barbecue foundation, but their skills and attention to detail set them in a decidedly upward trajectory. Stories like these are what keeps me excited for the future of great Texas barbecue. It can happen anywhere, even in a chocolate factory.