After an incredible championship game on Monday night, this season of college football is (sadly) behind us. But that means we can now focus solely on the NFL playoffs, in which the Texans are still alive and the Cowboys look to avenge Dez Bryant’s “non-catch” from a 2015 game against the Green Day Packers. In Sunday’s match-up against the Packers, though, the Cowboys have new stars—Dak Prescott and Ezekiel “Zeke” Elliott are the rookies to watch. And what better way to support them than by stuffing your face with sandwiches named after the players?

J.J. Watt, the injured defensive star of the Houston Texans, spent five seasons in the NFL before getting his own burger. Killen’s Burgers—owned by Ronnie Killen of Killen’s Barbecue—in Pearland introduced the 99 Burger in May of last year to honor Watt. In Dallas, Prescott didn’t have to wait so long. Snuffer’s announced the Dakburger before he even started a regular season game. And now Elliott has his own signature sandwich—a skyscraper of smoked meat called “the Zeke.” 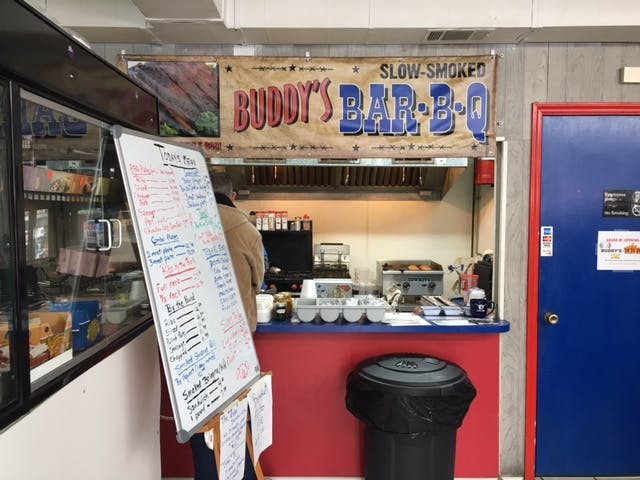 Buddy’s BBQ isn’t easy to spot. There’s no sign outside the Big Easy Discount store in Bedford, but you can look for the smoker that Buddy Haga parks out front. He and his wife, Robin, run the little barbecue counter inside where a few stools are set up for those dining-in. By contrast, the barbecue tower named after the league-leading rusher, which Buddy’s BBQ introduced in December, is hard to miss. With six different meats piled atop one another (the menu says five, but I give them double credit for sliced and chopped brisket), the Zeke is a sampler platter on a bun. The Zeke Jr., meanwhile, is more manageable. It’s three meats for $7, but when the original is only $10 and feeds a family of four, why bother with the smaller version? 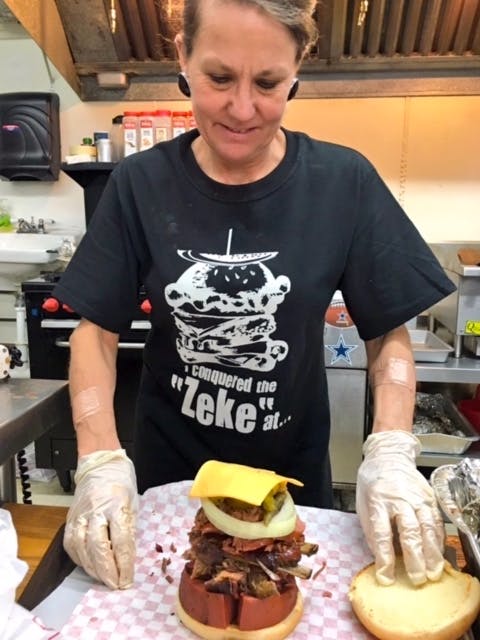 Robin built mine starting with a foundation of thick-sliced smoked bologna on a griddled bun. Then came the sliced brisket, pulled pork, ribs (bone-in), sausage, and chopped beef. Onions, pickles, pickled jalapeños, and a slice of American cheese topped it off. The finished product is as big as my five-year-old son’s head, which I noticed as he hunkered down to inspect each layer, planning his attack. 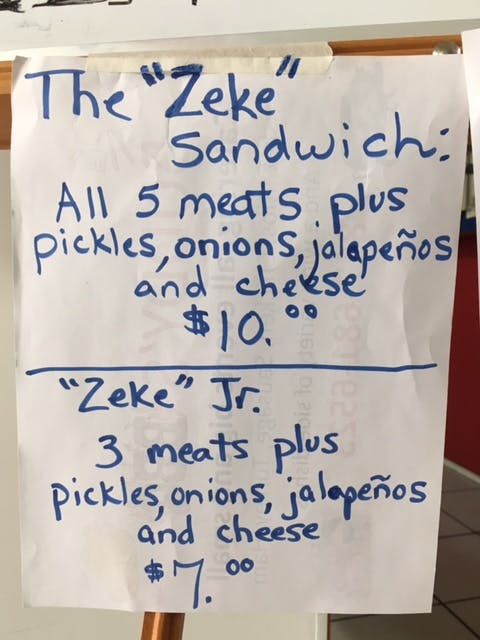 The inspiration for this behemoth likely came from the Jambo Texan at the nearby Jambo’s BBQ Shack. It’s almost identical, save for the Texas toast, which Buddy’s swaps for a bun. It’s also similarly impossible to eat as a sandwich because of the height and those pesky rib bones, so I took the Zeke apart layer by layer to sample the meats. I liked the bologna best, though the kids preferred the chopped brisket and pulled pork. It’s unclear which one Elliott prefers, because he hasn’t been in yet to sample his namesake.

If you finish the sandwich, you get a half-off discount for the “I conquered the Zeke” t-shirt. After paying just $10 for a six-meat sampler platter, though, I wouldn’t have the heart to take the discount.