When Houston’s Astrodome first opened in 1965, the scoreboard had an electronic cartoon for when the opposing team’s pitcher got removed from the game. “Pitcher, to the showers,” a manager intoned with a thumb motion indicating the pitcher was a gone’er. The cartoon pitcher walked off the field, head down and dejected, to the showers. Suddenly, the shower filled with water and the pitcher drowned. The last you saw of him was his surprised eyes. In the cruelty of childhood, I thought that was pretty funny.

That image returned to my mind on Thursday as I saw the videos of U.S. House Democrats chanting, “Na, Na, Na, Na, Hey, Hey, Goodbye” at Republicans who had voted to repeal and replace the Affordable Care Act, also known as Obamacare. The Republicans had voted for the American Health Care Act, a health reform bill of dubious character. If the legislation gets through the Senate—which is a big if—millions of Americans will likely lose their health insurance or have to pay exorbitant prices in a high-risk pool. But, in this moment, once again the two major political parties that control the greatest legislative body on the planet demonstrated that to them this isn’t about improving the lives of most Americans, but rather a zero-sum game of political winners and losers. The Democrats were boisterously acting like fans who witnessed the opposing pitcher get knocked out of a game.

The point of the chant was that the health care vote will give Democrats a chance to retake the House majority by driving home the idea that Republicans want to deprive people of healthcare, particularly children. The ones especially at risk are the 23 Republicans who represent districts that Democrat Hillary Clinton carried in 2016. As I noted recently, a Clinton victory in a Republican district alone is not enough to make the case for an easy ouster. While Republican incumbents Pete Sessions of Dallas and John Culberson of Houston are in districts carried by Clinton, they also received substantially more votes in their districts than she did.

Among the Texas delegation, all the Democrats voted against the AHCA. Every Texas Republican voted for it except congressman Will Hurd of Helotes. He has one of the most competitive congressional districts in the nation and is on the national Democratic Party hit list for 2018. Clinton carried the district, and of the three she did in Texas, Hurd is the only candidate who received fewer raw votes than the Democratic presidential nominee.

Another metric by which we might measure these districts for political impact is by how many people have insurance under the ACA in each district. So I turned to The Henry J. Kaiser Family Foundation for some statistics. They have an excellent interactive map if you want to study this beyond what I’m offering you here. Looking at the Texas congressional delegation, there are 690,900 adults and children who have Affordable Care Act health insurance through the federal exchange and who live in districts where the member of Congress voted for the Republican health care bill. In fact, six of the top ten districts with people enrolled in Obamacare are represented by Republicans. All told, there are slightly more than one million Texans who were covered in 2016 by insurance purchased through the federal ACA exchange.

The district with the most enrollees is Democratic: District 16 represented by  Hurd’s carpool pal Beto O’Rourke of El Paso—not terribly surprising given the level of poverty along the border. Hurd’s district, which stretches from San Antonio to El Paso along the Rio Grande, is ranked 18th out of the state’s 36 congressional districts for the number of enrollees.

The district with the second-highest number of ACA enrollees, though, is Congressional District 22 represented by Republican Pete Olson. His district had 40,500 people insured by the ACA in 2016. Trump carried the district with 52 percent of the vote, while Clinton received 44 percent, slightly more than her statewide average. Olson received 59 percent of the vote in his reelection campaign. But Clinton carried the largest county in Olson’s district, Fort Bend—which accounts for 62 percent of the total population of Olson’s district—and she received about 12,000 more raw votes in the county than Olson. (I should note here that part of Fort Bend County also is in Democrat Al Green’s district. However, if you add Olson’s Fort Bend votes together with those of Green’s Republican opponent, Clinton still received more votes in the county.)

What’s difficult to take away from the Affordable Care Act numbers in Olson’s district is the fact almost half the Obamacare federal marketplace enrollees here had incomes too high to qualify for full federal financial assistance. That means they might just as easily be those people complaining about the premiums as those worried about losing their health insurance. Also, these numbers include adults and children, so you cannot instantly equate them with voters.

Here’s how to read the Kaiser Family Foundation numbers: The first row is the total number of people who enrolled in Obamacare in 2106 through a federal exchange; the second row is the number of those total enrollees who received a premium tax credit on their income taxes; and the third column is the number who received federal subsidies on their purchase of healthcare. 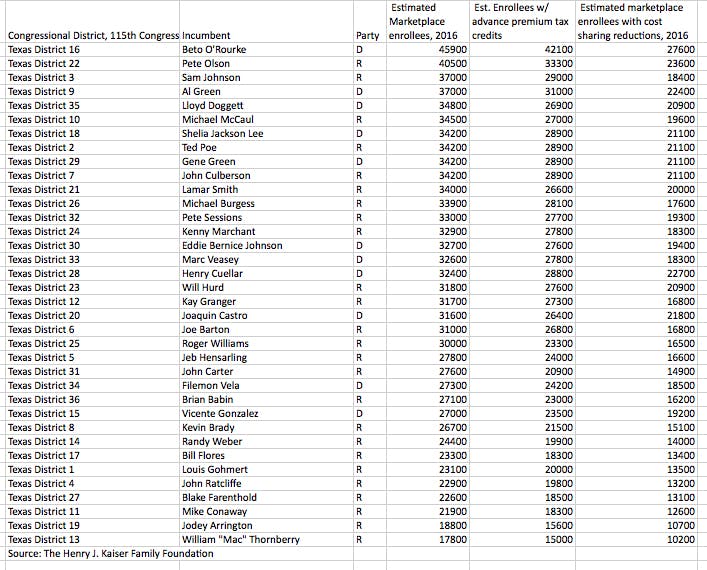