On Sunday, some 3,000 hungry carnivores will descend on the Terrace at the Long Center in Austin to devour a truly massive spread of meat at the Texas Monthly BBQ Festival. We’ll have 22 pitmasters from across the state serving up brisket, ribs, and sausage as festival-goers enjoy live music from Jimmie Vaughan and Ray Benson. Sounds like a pretty good time, doesn’t it? This will be the second annual BBQ Festival, an event that grew out of the Top 50 BBQ Joints round-up we publish in the pages of the magazine. For the festival, we invite those 50 joints to come and serve up their meat in one location. Last year 21 of them made it; this year we’ll have 22, including a new category for the best new place to open since our last list, the “Newcomer Tent,” which will be occupied this year by Austin sensation, Franklin Barbecue. BBQ is important to Texans and it’s important to Texas Monthly. In the year since the inaugural 2010 festival, we’ve also launched a BBQ smartphone app and a companion BBQ website, TMBBQ.com. The app locates nearby barbecue joints both within Texas and all over the world, as well as delivering reviews and information, connecting barbecue enthusiasts, and letting users engage in some friendly competition. It launched for iPhone on June 8, and currently has more than 15,000 active users. Today, we’re making it available on Android as well. Take a look. These digital efforts, and the festival—as well as our every-five-years Top 50 BBQ Joints story—give you a sense of how seriously we take our smoked meat here at Texas Monthly. And they also give you a sense of how seriously we take the idea of engaging with our readers in as many different ways as we can, in print, on screens and mobile devices, and at live events. The festival is sold out, so if you didn’t manage to get a ticket, you’re out of luck (of course, you can, and should, just go eat at every one of these places on your own). The folks who did manage to get a ticket (they went very fast) will have a whole afternoon of eating ahead of them. There will be a pitmaster panel discussion featuring the 2010 People’s Choice Award winners—Snow’s BBQ, Buzzie’s Bar-B-Que, Cousin’s Bar-B-Q, and Stanley’s Famous Pit Bar-B-Que. And another People’s Choice Awards. Whether you’re able to be there or not, you can keep up with the meat fest on Twitter and Facebook, where we’ll be posting updates and pictures throughout the day. But why wait until Sunday? In advance of the festival we have three contests running on Twitter. For the first, tweet @TexasMonthly your best haiku about barbecue. The second contest is more freeform: simply tweet a 130-character ode to meat along with the hashtag, #tmbbqfest. For the third contest, tweet your best barbeque photo @TexasMonthly. As far as prizes are concerned, first place winners get a copy of Texas BBQ by Wyatt McSpadden, second place winners get festival T-shirts, and third place winners receive festival posters. (Contest ends Saturday, October 29, 2011, at 11:59 p.m.) When tweeting from the festival, be sure to include the #tmbbqfest hashtag to win more prizes. See you at the festival! 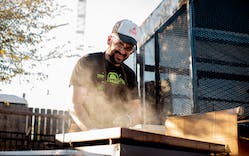