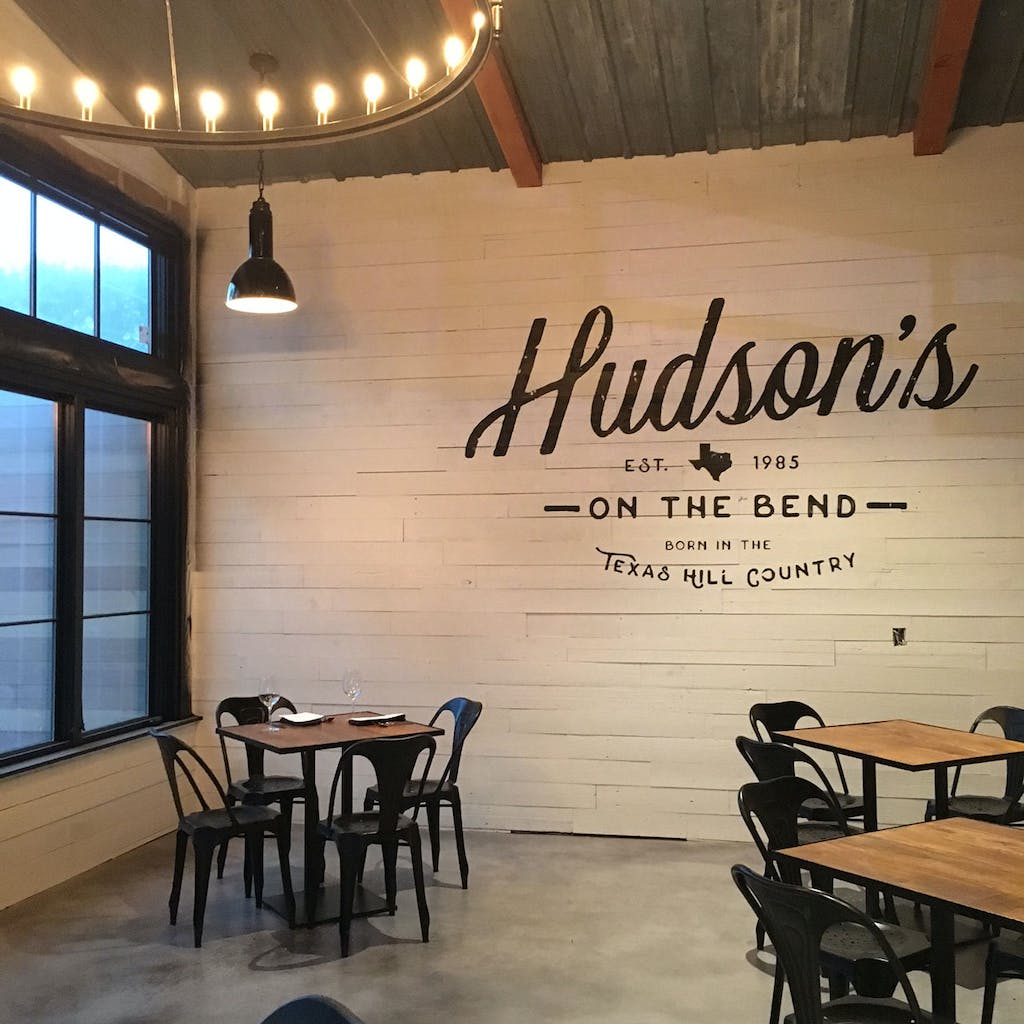 A few weeks ago, I had an opportunity to step into Hudson’s on the Bend, a longtime far west Austin fine dining restaurant, as it was rapidly undergoing the final steps of a remodel. As painters literally rolled fresh color on the walls and workers wielding construction drills secured drawer pulls and other raw-steel finishings into place, it became clear that my guest and I were quite literally the first dinner guests before Hudson’s big re-opening in late November.

I’ve seen my fair share of restaurant pre-openings, but this remodel was particularly special. Perhaps because it’s the re-opening of one of Austin’s long-standing icons. Or perhaps because of my enthusiasm for the new crew of young and polished restaurateurs behind the new unveiling. But I’m pretty sure it’s because of the sentimental tie Hudson’s holds in my personal memory.

For selfish reasons, I was a little ambivalent about change to a place was such a hallmark throughout my childhood and adolescence, and into a good part of my adulthood. I grew up in the Lake Travis area long before it was the thriving residential and commercial west Austin outpost that it is today. Back then, Lake Travis had more of a small-town vibe. No galleria for shopping. No 5A school district. In fact, when I graduated there were only 118 students in my class. But whenever there was a special occasion, Hudson’s on the Bend was the place to celebrate it. High school graduation, family anniversaries, birthdays, and later in life, the restaurant for special romantic dates.

The menu also made an impression on me when I was young. I’ll never forget just how novel it felt to order from a selection that included rattlesnake, elk, venison, and yes, kangaroo. As the child of an avid hunting family, it further elevated game meats in my mind and proved they could be something special, something adventurous.

And I have Jeff Blank to thank for that. In 1984, when Blank opened Hudson’s, he was a young chef who had already displayed a lot of ambition and talent. The new restaurant, literally around a sharp bend along Ranch Road 620, which, at the time, was a harrowing two-lane winding road, quickly gained a reputation as a romantic date restaurant, and Blank’s menu soon became known for its exotic game-centric focus.

This was all during a time before cable food networks and celebrity chefs. When there were only a handful of chefs turning heads—and appetites—in the state. Blank was certainly among them. His local fame afforded the restaurant the opportunity to brand a line of retail sauces and also spurred a local cooking school. Among the famed menu items: rattlesnake cakes (think crab cakes), espresso-rubbed elk loin, and “hot-and-crunchy trout,” a filet coated in spicy rub and crunchy tortilla crumbs and served with a spicy aioli. In fact, the trout became such a popular dish that when the founders behind the Austin City Limits Music Festival approached Blank in 2002 to spearhead the event’s food court, he transformed the favorite dish recipe into a hot and crunchy chicken breast served in a tortilla wrap in a paper cone. He dubbed it the Mighty Cone, and it has since evolved into its own brand as one of Austin’s top food truck concepts.

For more than thirty years, Hudson’s has continued to be a fixture of Austin. But in March 2016, Blank made the decision to hang up his chef’s hat for good and sold the restaurant to a newly formed restaurant group. When I heard this news, I was a little trepidatious as to whether or not the new guys could maintain the sentimental esteem it held in my heart. (Not that it’s all about me, but I’m pretty sure I’m not the only one who had a particular affinity for this restaurant.) Then I found out about the team behind the purchase, and I was happily intrigued.

Cleverly named Prime Thyme Restaurant Group, this young team of restaurateurs is led by Lake Travis native Billy Caruso, a Culinary Institute of American Hyde Park grad with experience helming the kitchen of Botticelli’s Austin and III Forks Steakhouse in Chicago. He’s joined by longtime Austin wine slinger,Chris McFall, an advanced sommelier whose deep knowledge of all things wine and beverage is all wrapped up in a velvet glove of hospitality.

“The opportunity for Hudson’s just happened out of the blue,” Caruso recently told me. “Jeff wasn’t going to just sell it to anyone. One of his sous chefs wrote my letter of recommendation to culinary school and was a huge part of my culinary development. Hudson’s was part of my home. When Chris and I heard about this, we know it was this project for us. We wanted something that was more than just a new restaurant.”

Joining Caruso and McFall is a polished team of professionals including chef de cuisine Brandon Silver, whose culinary prowess has been influenced by time at Noma in Copenhagen, and Austin’s own Uchi, Uchiko, and Qui. Executive pastry chef Rosie Gibson, the unsung hero of the kitchen, has spent time in some of the city’s best kitchens including La Condesa, Sway, Clark’s, Jeffrey’s, and Laundrette. To help bolster the wine program, Stephen Keys heads up the bar program with extensive cocktail-fashioning experiences from Boston, Las Vegas, Chicago, and Florida.

For the past eight months the restaurant has undergone an extreme renovation with the help of Ben May Design architects and designer Tabette Stewart of CCG Development. The garden that was once woody and rustic is now a sleek wood-decked patio under an arbor of oak trees with a glitzy outdoor bar and a modern private dining gazebo in back. The smaller, intimate dining rooms throughout the main house are still quaint and inviting, but each with higher ceilings and a refined, brighter and fresher feel.

The front porch, which used to house outside diners on a rocky uneven floor-scape has now been re-floored and framed with steel window work to become an extension of the building with a French bistro feel. Along the front room is the bar, with custom-made steel-grate shelving and a state-of-the-art beer tap system. The new Hudson’s logo is painted in black over the main whitewashed barn-wood wall, setting a tone for what guests can expect.

And what, exactly, can guests expect? According to Caruso and McFall, the new Hudson’s is in many ways an homage to its founder. But as with anything new, the Prime Thyme team has put careful thought into how to freshen up the look, feel, and taste of the new menu.

“We’re not nearly exactly the same as the original, but our goal has always been to re-envision what Jeff had in mind for the restaurant from the very beginning,” McFall says. “Most importantly that means keeping the core values of Texas hospitality. We’ve given things a modern edge that people who are new to the area can appreciate experiencing for the first time, but hopefully, people who have been coming here for the past thirty years can still feel that it’s a special place.”

As for wine and beverage in general, McFall has taken his time putting a wine list together as the dining menu has evolved. “There will be a lot of international finds on the list with a nod to both old world and new world wines. But the goal is to work towards a harmony with flavors from the whole menu at price points that anyone can find approachable,” says McFall.

Hudson’s officially opened its shiny new doors to the public on November 22. It’s been just a couple of weeks, but the team is working out small kinks as quickly as possible. “We’re ready for both encouragement and criticism,” says McFall. “We’re offering a lighter and brighter version of Hudson’s on the Bend to a new crowd. But it’s still an adventure in its own right, and that’s always been the best part about it.”

Our inaugural dining experience couldn’t have been more memorable. We savored a delectable menu with exquisite wines and a smattering of dishes including yellowtail ceviche in a tart and tangy “Tiger’s Milk” and blood-orange broth; a white bowl painted green with mojo verde and harboring warm morsels of double-fried punches with grated parmesan and garlicky aioli; perfectly tender braised rabbit with a rich brown gravy and Rosie Gibson’s goat cheese-poppyseed ice cream with amaranth and candied lemon curd with a breathtakingly sweet and savory goat cheese and fig ice cream sandwich to finish.

After the meal, I thought back to first time I dined at Hudson’s on the Bend under Jeff Blank’s direction, and I remembered just how I felt at that moment. I can honestly say now that I’ll also never forget the first time I dined at this phoenix from the flame under Prime Thyme’s direction. Fears of losing a little piece of home, for me, at least, are resolutely quelled. Hudson’s is indeed in good hands.