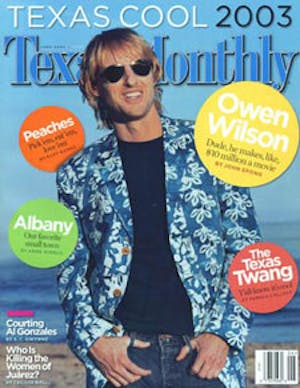 Bluefford Hancock squeezed my elbow as if testing it for ripeness—an understandable gesture, considering that he was in the midst of appraising peaches at the fortieth annual Stonewall Peach JAMboree, where he has served as a judge since the festival’s inception. A retired horticulturist with the Texas Cooperative Extension, a branch of Texas A&M University, Hancock remained focused on the task at hand, refusing to be distracted by my elbow, the late-June heat, or even the dance recital on a nearby stage, where waist-high cuties decked out in indigo sequins hammed it up to “Has Anybody Seen My Gal?” He bestowed blue ribbons on the cream of the crop, like the heaviest peach (a .79-pound Harvester, rather wimpy compared with past winners that weighed in at more than a pound) and the prettiest one (another Harvester).

But Hancock, who helped start the Texas Peach Growers Association in 1952, knows that the real measure of a winning peach is more than skin-deep. “It’s about how they taste, and Texas peaches taste the best,” he said, unable to resist a dig at that nefarious farming state out west, whose peaches “look like a magazine cover photo and taste like wallpaper paste.”

A little gloating can be forgiven, since this scene took place two years ago, when Texas peaches were plentiful. Then last year a late freeze reduced the crop to a third of the average 30 million pounds, and this summer’s harvest will be even smaller, thanks to a particularly devastating freeze at the end of March.

Amid such a paucity of peaches, it’s hard to imagine that there was a time when the peaches-for-fun-and-profit craze consumed East Texas landowners much like tulipomania infected seventeenth-century Holland. It all began sanely enough around 1890, when the state’s first commercial crop rolled out of the area surrounding Tyler, which boasted ideal growing conditions as well as rail lines leading to northern markets. At the turn of the century, the area’s cotton farmers were hit with the double whammy of falling prices and a boll weevil invasion. Meanwhile, wildly exaggerated reports of the easy money to be made growing peaches spurred thousands of farmers—not to mention lawyers, merchants, and doctors—to sink everything into peach orchards. Although 90 percent of the would-be orchardists had no fruit-growing experience, the sheer number of trees they planted, coupled with the absence of modern-day diseases and pests, made up for their agricultural ignorance, and in 1912 East Texas was buried under 149.9 million pounds of the fruit. The surplus of peaches—mainly Elbertas—was so large that there weren’t enough railcars to haul them north, and millions of pounds were piled along the railroad right-of-way to rot. But like some mutation from a fifties horror flick, the peaches couldn’t be stopped: The bumper crop of 1919 topped 221 million pounds.

Eventually, mountains of rotting peaches and prices of pennies per bushel not only thinned the herd of pomologists but also motivated true believers to find solutions

Gradually, peach trees crept west across Texas, taking root mainly in a wide central swath from Dallas to the Hill Country. Parker County, west of Fort Worth, claims the title Peach Capital of Texas, and De Leon, in nearby Comanche County, is home to the long-running Peach and Melon Festival, now in its eighty-ninth year. Growers in the Valley have even tried their hand at the crop but with limited success. David Byrne, however, a professor of horticulture at Texas A&M who has developed several varieties that are compatible with mild winters, holds high hopes for the region.

While the Tyler area still produces its share of the blushing fruit, it has dropped to number two in the state in production. The leader is now the renowned Gillespie County, which has the kind of dirt (red-clay subsoil topped with potassium-rich sandy loam) that peaches love, according to Bluefford Hancock. While crowing about the caliber of their crop seems to be required of peach farmers throughout the universe, nowhere is the chest-thumping louder than in this Hill Country county.

Don’t go to the Gold Orchards farm stand, on U.S. 290, for instance, and ask for Fredericksburg peaches. You’re in Stonewall, locally considered the birthplace of Hill Country peach farming. As far as the Golds and most other Stonewall growers are concerned, those gentlemen farmers over in Fredericksburg, fifteen miles west, merely dabble in the business.

The Golds weren’t the first farming family in Gillespie County to plow under their peanuts and plant peaches commercially. (That distinction goes to B. L. Enderle, who reportedly kick-started the local industry back in the mid-twenties.) But the family has been at it steadily for three generations now. The late Erwin Gold planted a few peach trees on his land just northwest of Stonewall proper in 1940 and sold his harvest on the roadside from the trunk of his 1937 Ford sedan. By the early seventies, Erwin—with help from his wife, Alma, and their three strapping sons, Alvin, Harley, and Lawrence—was picking 20,000 bushels of peaches in good years and tending to more than two hundred acres of the handsome little trees.

Harley, 73, and Lawrence, 63, claim to be retired (Alvin passed away in 1999), having handed the reins to Lawrence’s daughter, Luana Priess, and her husband, Ricky. But the brothers can’t stay away from the family’s farm stand for long. That’s where I caught up with them back in 2001, just as a trailerload of Lorings arrived to begin their journey through the forty-foot-long grading machine, a contraption that marries the beauty of automation with human judgment.

As the peaches jostled down the grader’s first conveyor belt, the overripe and severely blemished were culled by hand. Those that made the cut were then defuzzed with water and spinning brushes. Next, the buffed beauties danced along a section of rotating sponges that gently dried them before another conveyor belt carried them through a second gauntlet of inspection. Like proud parents, Lawrence and Ricky searched for the slightest imperfections; just a dab of infectious brown rot on one peach can spread through a bushel of the fruit faster than gossip in a small town. Finally, the survivors—the Gold standard, if you will—were sorted by size in an ingenious device that reminded me of a carnival game, with a grinning Harley checking the fruit one last time for nearly microscopic defects. Throughout the entire process, the three men appeared on the verge of giggling.

I have to confess that, until I saw the magical grading machine, I didn’t understand how peach farming could appeal to anyone but a die-hard masochist, even in the best of times. Sure, as I toured the Golds’ lush orchards, with their trees lined up precisely, like a vast, bright-green army, I thought how cool it would be to coax bounty from the earth and all that. But any romantic notions I had died when the talk turned to root rot and other diseases, creepy insects like stinkbugs, drought, floods, hailstorms, too few chilling hours (between 32 and 45 degrees) to set the fruit and too few sunny days to sweeten it—not to mention those cruel late freezes.

And that’s not all: You have to wait four years after planting the trees to harvest your first crop. The real kicker, though, was learning that, in those rare years when everything comes together perfectly and the trees are heavily burdened with fruit, about a fourth of the baby peaches must be plucked or shaken off for the sake of the others. Murder! And if you think I’m neurotically tenderhearted, even Jim Kamas, a fruit specialist with the Texas Cooperative Extension, likens the task to “stepping on chicks.”

The Golds’ work doesn’t stop in the orchard or at the grading machine. Lynette, Lawrence’s wife, sets a breakneck pace in the farm stand’s kitchen, which, on the day I visited, was as spotless as one in a model home even though she and her two helpers were busily canning preserves, feeding homemade peach ice cream into the soft-serve machine, and baking a couple dozen pies. Luana was also in the kitchen that day, but she didn’t look comfortable in this dauntingly domestic scene. “There’s no place she’d rather be than out in the orchard with her father, driving the tractor or whatever,” Lynette explained. “She’s the son we never had.” This make-believe son, however, was gal enough to be a duchess in the JAMboree Peach Court of 1985. Just don’t ask her to taste the cash crop. “I love to work with peaches,” Luana confessed, “but I hate to eat them.”

And they say irony is dead, I thought, as I polished off my second piece of pie. This family sideline—Lynette’s brainchild, born four years ago—has taken off faster than you can say “flaky cinnamon crust.” During the JAMboree, they sell more than sixty pies a day. Luckily, Lynette, a petite woman with the energy of a hummingbird and the rainy-day instincts of the proverbial ant, is prepared for this year’s crop flop. When I checked in with her in April, she assured me that if, as expected, Gillespie County peaches are scarcer than minimalist B&B’s this summer, there will still be pies aplenty. Her five big freezers are packed with more than a thousand gallons of bagged and labeled peaches that she has stockpiled in better years. She even has enough to sell to the Stonewall Chamber of Commerce so they’ll have something to serve with the ice cream at this year’s JAMboree (June 20 and 21).

But even at the 2001 JAMboree, the peach pickings were shockingly slim: store-bought ice cream topped with frozen peaches, doughy cobbler, peach freezes with more vanilla than fruit. No shortage of nachos and sausage-on-a-stick, though (maybe Luana was in charge of the food). I envied the pie-and-cobbler judges, who were happily sampling dozens of entries, safely cordoned off from peach-deprived fairgoers like me.

Cleansing their palates with soda crackers between bites, the lucky judges rated the contenders on appearance, peachiness, and crust. Betty Nebgen, who was standing nearby—she was in charge of the contest for 21 years before passing the mantle to Marjorie Otte in 2000—explained the rules to me: No pie or cobbler can include ingredients that require refrigeration, like cream cheese, and entries are disqualified if the taste of peaches is overwhelmed by, say, too many almonds or, in the case of one entry a few years ago, Red Hots. “The Red Hots gave the pie a real pretty color,” said a diplomatic Nebgen, “and it tasted real good. But not like peaches.”

Maybe I could get my piece of the pie at the festival’s peach auction, I thought, where the top winners in all the categories—from fresh peaches to jams and jellies—are sold to the highest bidder (a portion of the proceeds goes to the chamber of commerce). But when I watched the heaviest peach go for a whopping $500 and the prettiest one for a princely $600, I realized that my chances of snagging even the fifth-place cobbler were hopeless. I wonder, though, if I’d known then what I know now—that Texas peaches are fragile treasures that we should never take for granted—would any price have seemed too high?