This Friday, John Wick 3 hits theaters. The Keanu Reeves-led action franchise has almost nothing to do with the story we are about to tell you, but there is one thing that both the titular assassin Reeves portrays and the owner of Pflugerville Chinese restaurant Kung Fu Buffet have in common: They respond to the transgressions of others with a response so disproportionate that it’s impossible to look away.

For John Wick, some jerks kill his puppy, and he spends the next three movies brutally destroying everyone even remotely connected with the people who did it. For “Kung F,” the nom de Yelp of Kung Fu Buffet’s owner, every negative review is met with retaliation—often personal, occasionally snarky, sometimes abstract, and always more extreme than the initial review that prompted the reply.

This came to our attention via a recent Reddit post, where users discussed the restaurant and Yelp etiquette, as well as other tangential topics. Observing how the owner reacts to comments from diners is compelling. Here are some screenshots of memorable exchanges: 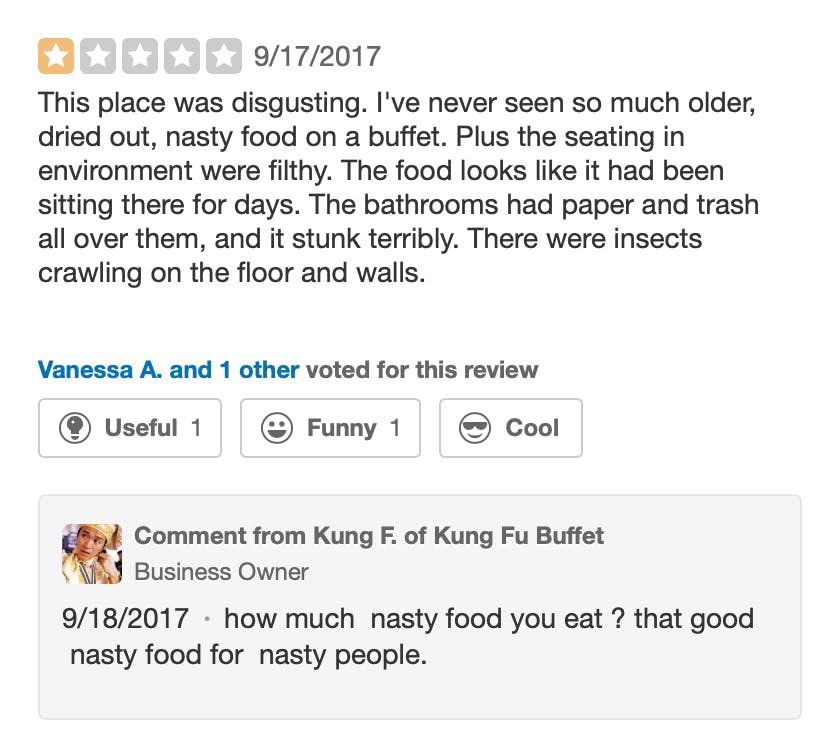 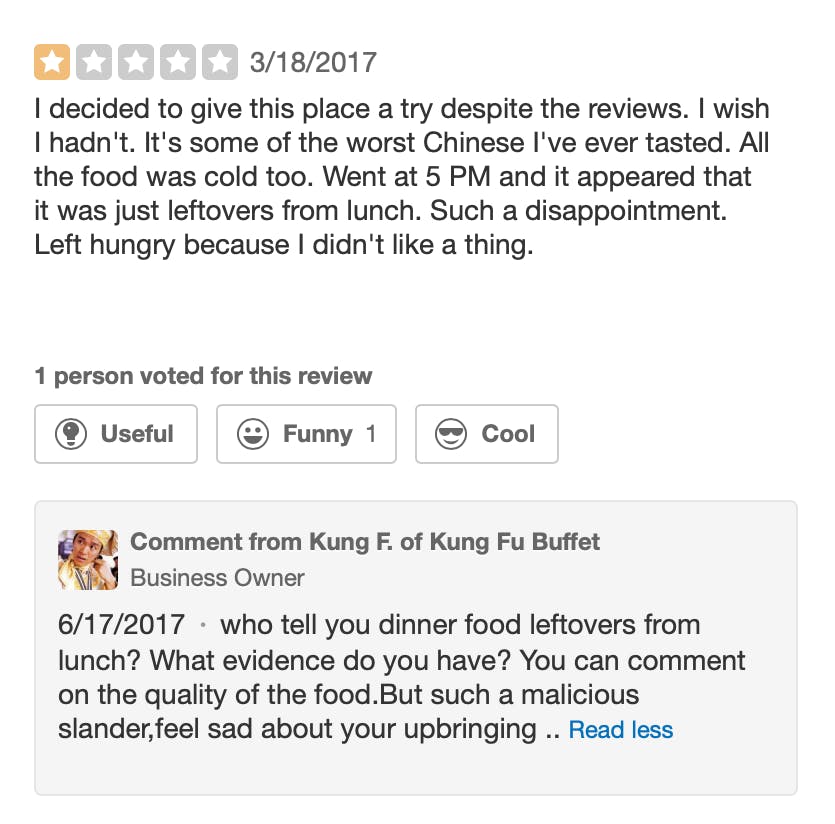 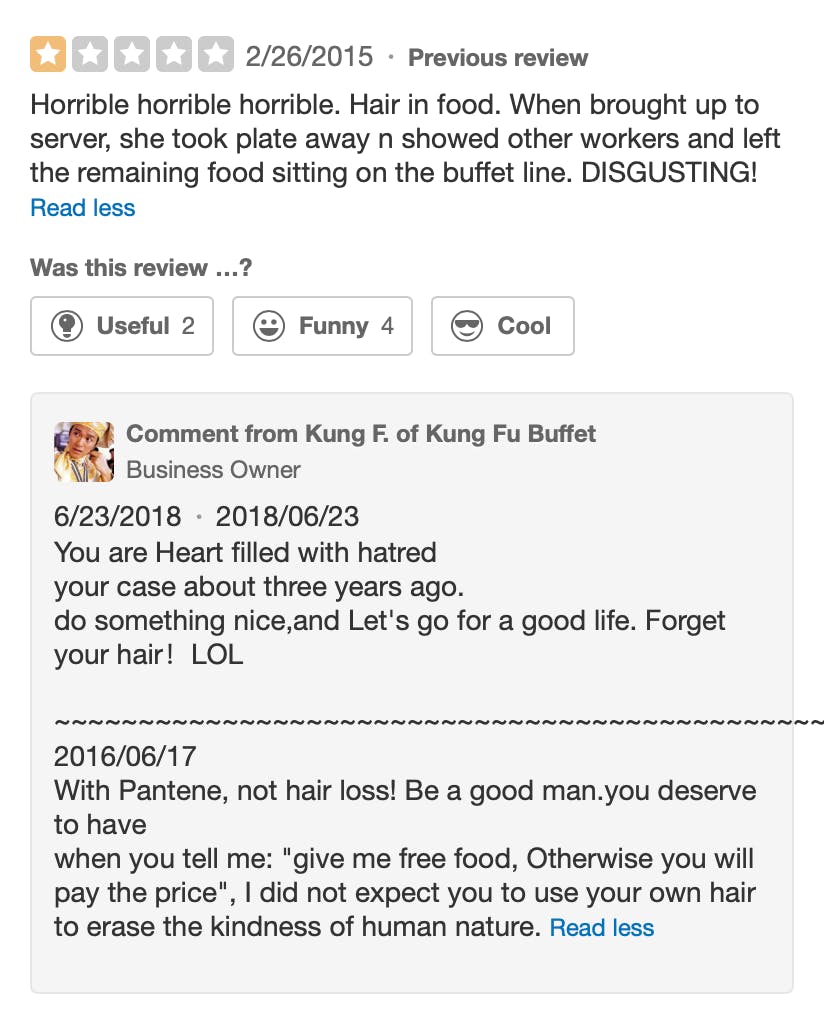 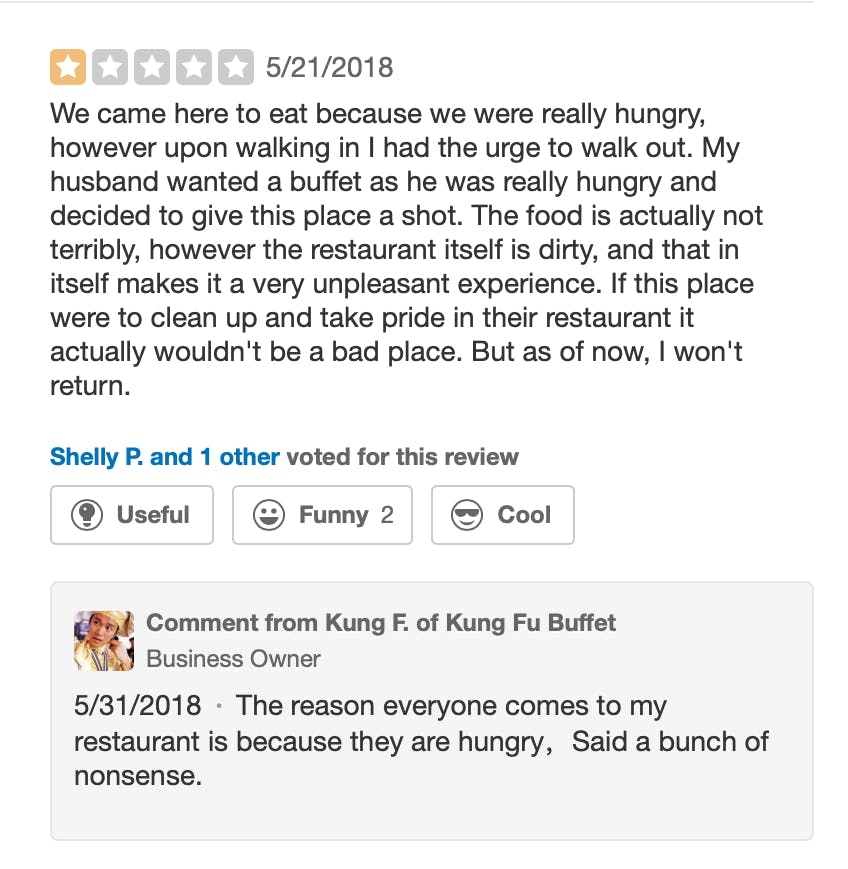 “The reason everyone comes to my restaurant is because they are hungry” is the sort of response to a negative Yelp review that every business owner would like to post. Most don’t, and for good reason—insulting your customers, while momentarily satisfying, is ultimately not the wisest business strategy. (The owner’s reflexive contempt for customers who make multiple trips to the buffet line suggests that even those who haven’t posted a review fall within the splash zone of his ire.) But his willingness to just go there, over and over again, by telling a customer “learn to cook at home loser!” or to declare that you “feel sad about [their] upbringing” holds some primal appeal nonetheless.

Restaurant owners hate Yelp. Chefs hate it. Servers hate it. The democratization of food criticism reads like a good thing on paper—learn what folks like you think of the new Chinese buffet!—but people have a tendency to overdramatize their experiences when they write them out, in ways that can get servers fired or cause owners and managers to obsess over an ever-shifting star rating. Part of living in a culture where everyone is a critic is living in a culture where a lot of people are actively seeking factors about which to be critical, so that they have fodder for their next review. Have as many people actually gotten food poisoning at Kung Fu Buffet as claim they have on Yelp, or are they just looking for a dramatic way to make the point that they didn’t like the food? It’s hard to say.

No one answered the phone when we repeatedly tried calling Kung Fu Buffet for comment about the Yelp strategy, but it seems clear that the owner is, at the very least, frustrated by the constant stream of feedback that Yelp offers. He’s hardly the first to feel that way—a Denver restaurateur made national headlines for his willingness to review his own critics on the site, offering feedback like “You do write with a prose that reminds me of a high school valedictorian that try’s way too hard to sound intelligent” to a Yelper who seemed to pride himself on his long-form review style.

The Kung Fu Buffet owner’s approach to reviews is more “write something it would be extremely rude to say to a person’s face” and less “turn the tables on the critics,” but we can assume that most restaurateurs can relate to the impulse. While many of the responses feature harsh blowback to the initial review, there are times when “Kung F.” seems to be feeling whimsical, artistic, or just tired of dishing up insults like so much General Tso’s Chicken. 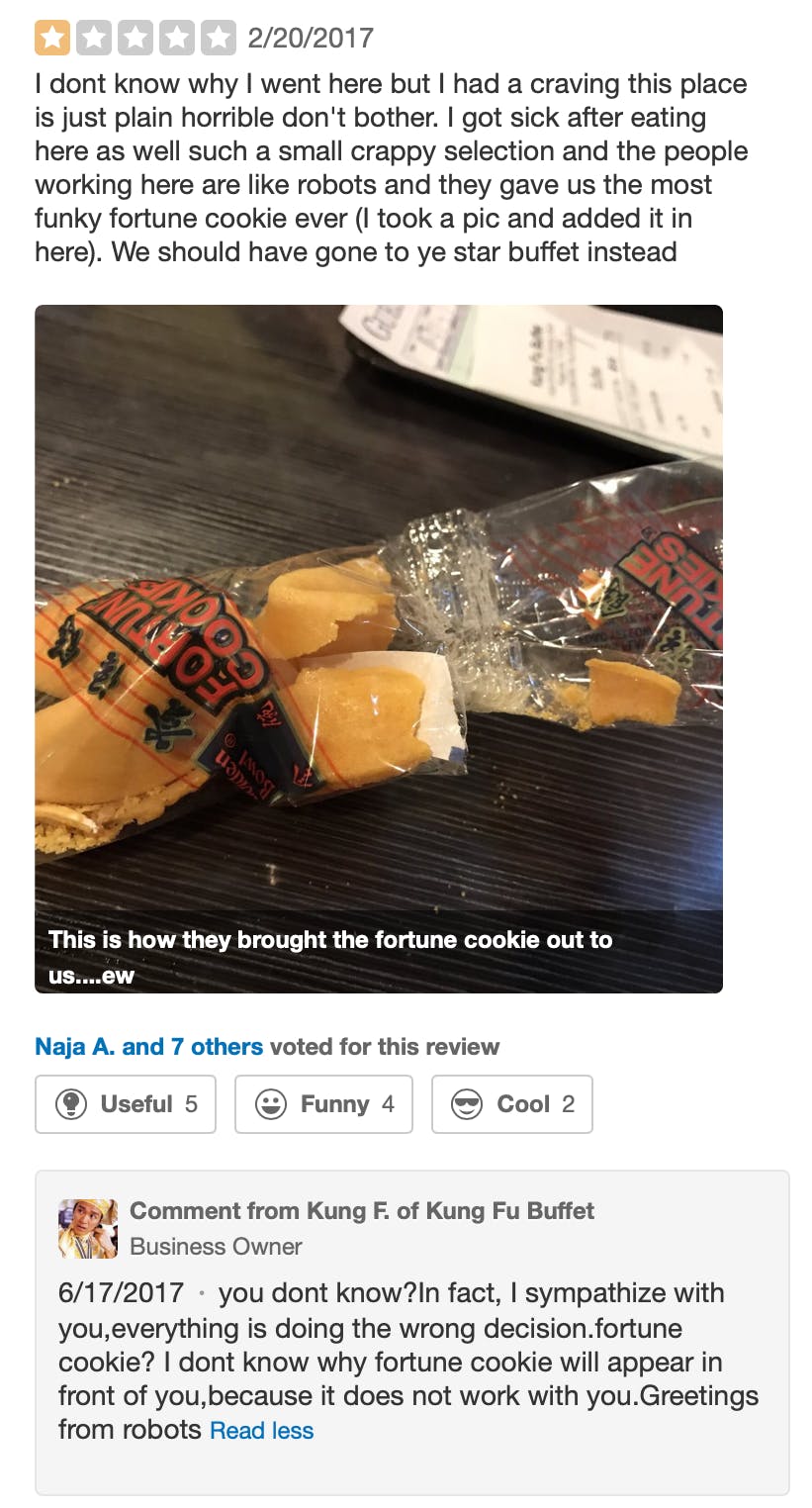 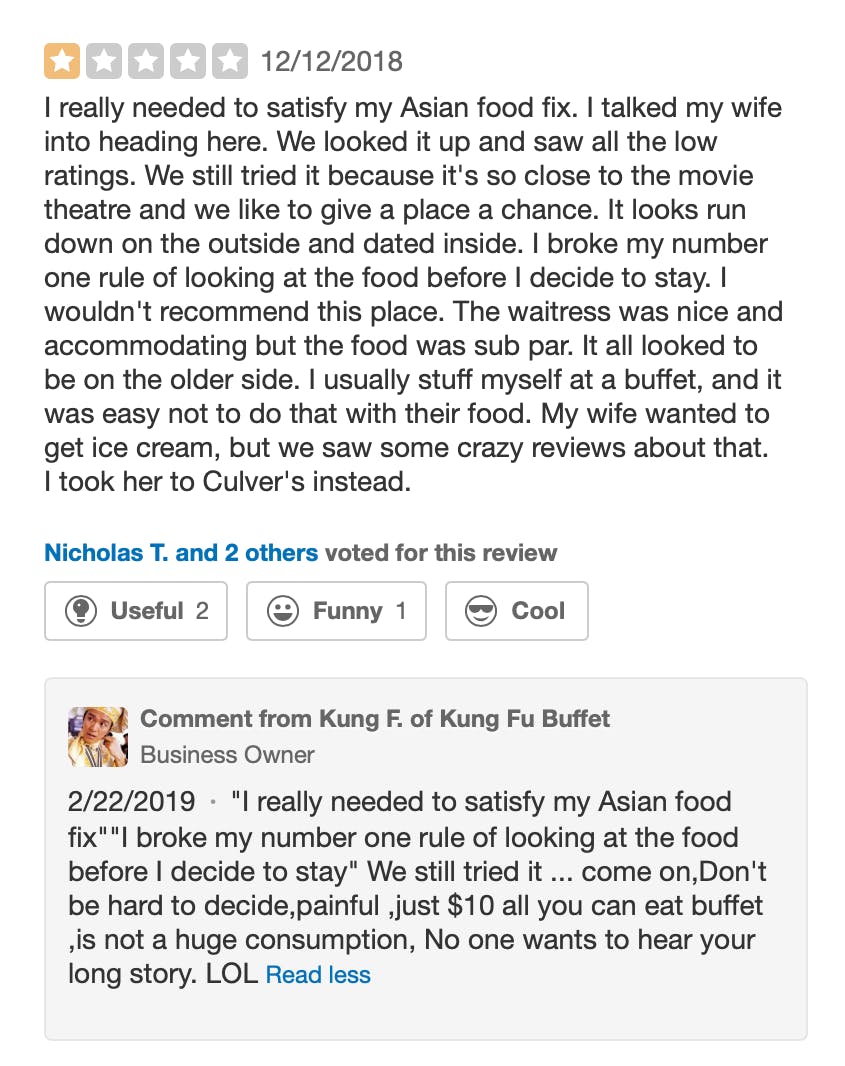 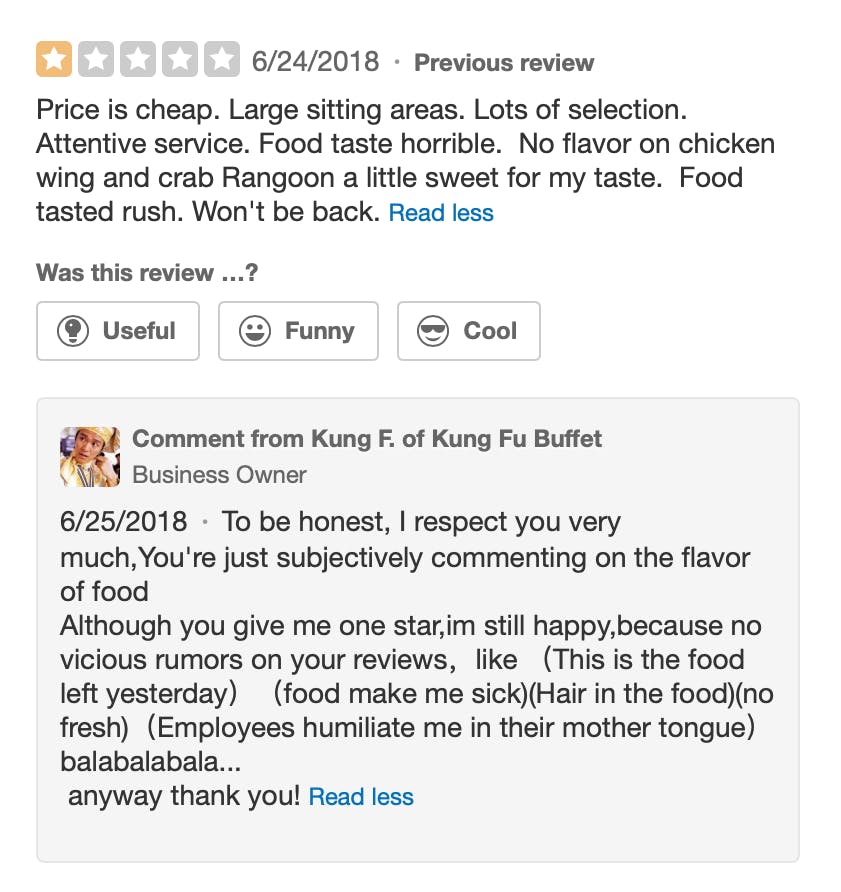 Sometimes he’s friendly to customers we’d expect him to respond to with rage. Sometimes he dismisses everything with a simple “no one wants to hear your long story.” (True!) Sometimes it’s more of an improvisational/free jazz construction, culminating in a non sequitur like “greetings from robots.” Given how difficult Yelp makes the lives of restaurant owners, that kind of dismissive response seems understandable.

The war between Yelpers and restaurant owners is often one-sided. Yelp users wield a power that (like all power) tends to corrupt. Firing back at the other side, as the owner of Kung Fu Buffet does, might not make you a winner, but it’s definitely a bold approach to seeking something more like a fair fight.