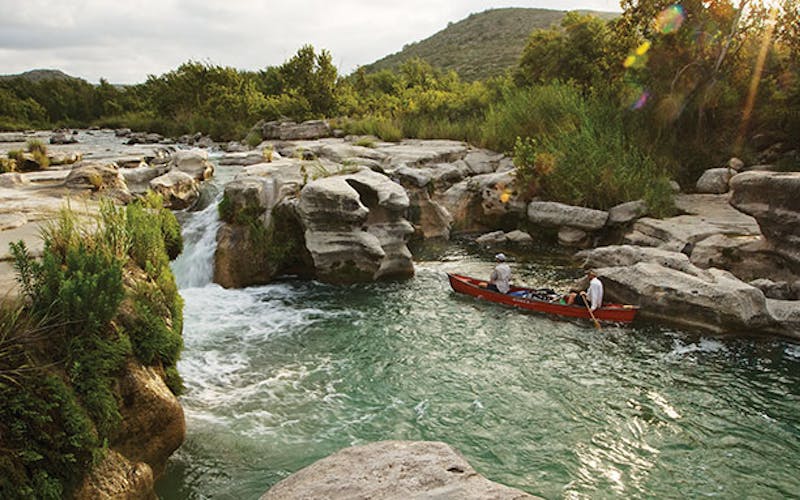 The Devils River has a reputation as the loneliest, prettiest, most dangerous, and best damn fishingest waterway in all of Texas. I’ll leave it to others to debate these superlatives, but here’s what I do know: coming upon this Caribbean-blue stream amid a rocky landscape that has barely changed since the era of the Comanche is a life-altering experience. Spend some time in its pristine waters, catch a couple of feisty smallmouth, and let the roar of Dolan Falls ring in your ears, and you will be charmed. You will also be intimidated.

And you will want to go back.

Of course, getting there is easier said than done, because the Devils River, a remote tributary of the Rio Grande that runs some fifty miles across the desert, offers very few points of access. One such point, and it’s a helluva rugged place, is the Devils River SNA, which lies at the crossroads of the Edwards Plateau and the Chihuahuan Desert. That’s where I made camp this past spring—on a flat site between two rising ridges of limestone—then hiked for about a mile down to the river, an inflatable kayak in my rucksack. After putting in, I paddled downstream about half a mile to Dolan Falls, where I stopped to clamber across some rocks and spotted a few bass suspended in the cascading current. Though water levels were relatively low, the falls still made a mighty roar; the torrent at the ten-foot drop pounded in my ears as I sight-cast to a cluster of smallies and used my fly rod to land some hard-fighting fish.

Around the river, I found several trails that cut through prickly pear and willows in the shadow of the limestone cliffs, and I learned that it’s worth visiting higher ground too: the 20,000-acre Del Norte Unit, a rolling expanse just east of the river, offers twelve miles of trails for hiking and biking. Texas Parks and Wildlife also recently acquired a second, 17,000-acre unit called Big Satan, which should inspire more superlatives when it opens to the public at some point in the future. What can I say? I’m ready to go back.

Getting There: From Del Rio, travel 45 miles north on U.S. 277, then turn left on Dolan Creek Road and go 22 miles to the Devils River SNA headquarters. (Open Fri–Mon, free. 830-395-2133. Many of the roads are rough gravel and feature low-water crossings, so use a high-clearance vehicle.) To canoe or kayak, secure a permit from park headquarters. To reserve one of the primitive camping sites ($10), call Texas Parks and Wildlife at 512-389-8900.