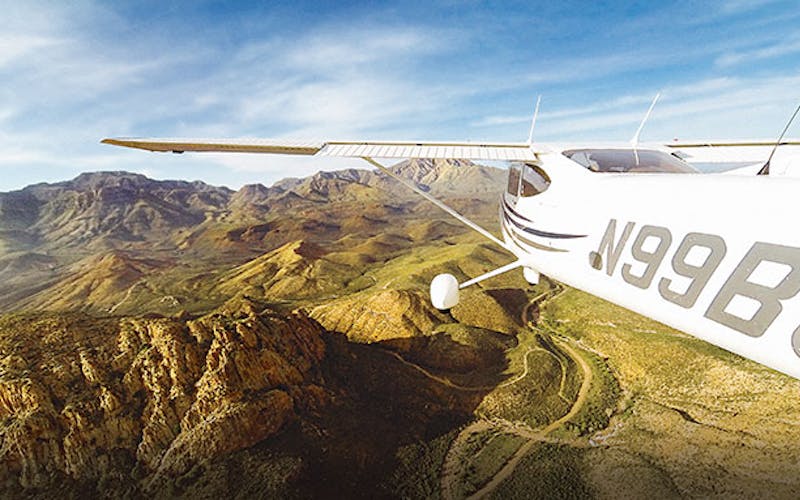 Photograph by Jay B. Sauceda

Texas may have wild, wide-open spaces, but that doesn’t mean the public has access to them. Ninety-two percent of the state’s land is, in fact, privately owned, which means that some of our most scenic spots are hidden from view. This can present a challenge to the explorer—unless you happen to have a pilot’s license. After all, no one owns the sky.

If you are among the roughly 39,000 pilots in Texas, you know the state is a breathtakingly beautiful place to fly. With mountains, desert, forests, and coastal areas all within a couple of hours’ flight, the topography beneath you is always changing. There’s also the sci-fi quality of city skylines emerging like stalagmite formations on the horizon—not to mention urban lights at night, which, from the air, look as though the Milky Way exploded on the ground.

But it’s the Texas wild, preserved on some of the state’s private ranches, that offers many of the most surprising aerial views—of herds of antelope, giraffes, and zebras in the Rio Grande Valley, for example, or brilliant blue waterfalls and lagoons in the Hill Country. The most visually stunning and remote spread, however, is arguably Pinto Canyon Ranch, at the base of the Chinati Mountains, in far West Texas. Owned by John “Jeff” Fort III, the 72-year-old retired CEO of Tyco International, the ranch is an arid, rocky stretch of 62,000 acres that includes much of the forbidding Pinto Canyon. Because the canyon’s walls can rise almost four thousand feet, it is most easily approached from the air.

Looking down as you fly over, you’ll see the earth is reddish and rippling, like waves and eddies in a rust-colored sea. The vegetation, low and sparse, is its flotsam and jetsam. The only signs of life are the wild burros that sometimes take shade in the shadows of the rock-and-mortar sculptures erected by the late artist Donald Judd, whose homestead is enclosed by the ranch. As if this weren’t enough, when you drop your altitude to, say, five hundred feet above the canyon floor, you see something else: vestiges of prehistoric life. There are volcanic rocks arranged in almost perfect circles atop mesas—the remnants of primitive dwellings—and recesses in the sides of the cliffs that represent Texas’s first high-rise apartments. You can also see the assorted rectangular cutouts where archaeologists have, with trowels and brushes, dug into and swept away the ruddy earth to find artifacts that date back as far as 11,000 BC, the tail end of the last ice age. Out here, where there is no civilization, lie the clues to the very beginnings of civilization.

Fort, who is an avid hiker, mountain climber, and horseman, did not know about this archaeological treasure trove when he first started buying parcels in Pinto Canyon, back in 1996. But four years later, while scouting the property on horseback, his ranch manager called his attention to a rock. “It was this fifteen-foot-tall petroglyph with all these carvings, and I just said, ‘Wow,’ ” recalls Fort.

His ranch manager guessed it was the scratchings of some Indians, but Fort, suspecting it might be something more, sent a picture of the petroglyph to archaeologists at the Center for Big Bend Studies, at Sul Ross State University, in Alpine. The archaeologists were astonished; what Fort had found was some extraordinarily well-preserved prehistoric art. The discovery quickly led to a partnership between Fort and the center, whereby the ranch owner and the archaeologists are now working together to identify and catalog the canyon’s ancient riches. “It’s like a James Michener novel, where you have a really interesting, long narrative, starting with volcanic upheaval millions of years ago followed by all the trials and tribulations of subsequent generations,” says Samuel Cason, the archaeologist who oversees the project.

Uncovering the ranch’s prehistoric past hasn’t been easy. Access to some sites requires riding in an ATV along winding arroyos and over rising, craggy terrain, then hours of rigorous hiking. There are also poisonous snakes, thorny vegetation, and quicksand pits the size of manholes. But Fort seems undaunted, and he is not alone: Homer Mills, a rancher who manages the nearby 267,000-acre O2 Ranch, has been making similar finds on the spread he oversees, where digs are also under way. Despite not being professional archaeologists, Fort and Mills have studied up and developed an uncanny ability to sniff out where prehistoric people once dwelled. “They’ve discovered much of the archaeology,” says Cason, who has worked with both men. “For all my training and education, I’ve learned to follow their lead.”

In the years since the digs began, the ranchers and archaeologists have hit upon human remains, pottery, arrowheads, cooking implements, and more petroglyphs, as well as rock art that’s reminiscent of cave paintings in France and North Africa. Some of these images are hunting tableaux, while others depict human figures with hands that look like radiant suns. (Fort calls them “Picasso hands,” while Mills, perhaps competitively, is more dismissive. “I think it’s more likely the graffiti of prehistoric juvenile delinquents,” he says.)

As far as Fort is concerned, the search in Pinto Canyon will continue indefinitely. The property is so vast that no one knows how much more there is to uncover; even in the areas that have already been explored, a heavy rain can easily cause dirt to wash away or rock shelves to collapse, revealing more treasures. To help pick out likely areas of prehistoric habitation, archaeologists have used helicopters and drones to create high-resolution maps. “I’m really fortunate to get to work all over the planet, and I can tell you, the archaeology out there is definitely world-class,” says Mark Willis, an Austin-based archaeologist who has done aerial mapping with kites, blimps, and drones in Pinto Canyon. “And with those deeply incised canyons and amazing rock formations, the terrain is just beyond beautiful.”

All the more beautiful when viewed at some altitude. From the air, you can imagine the volcanic eruptions and roiling tectonic plates that created those formations, as well as appreciate the expanses that prehistoric people had to cover to reach safety. You can’t help but wonder how they would have reacted to an airplane’s flying overhead. Would they have been terrified? Probably not, given the more immediate and grim realities they faced on the ground. The thought of such dangers can make you feel far less intrepid, safe in your cockpit with GPS guiding you back over the rim of the canyon, over the mountain peaks and into the clouds.

Getting There: You can fly the perimeter of Pinto Canyon by arranging for a charter flight with marfa gliders (432-386-5505) or simply hiring a charter pilot out of your home airport. If you have a license but are unaccustomed to canyon flying, with its unpredictable downdrafts, you’d do well to contact Roger Amis ([email protected]), a former pilot for the Border Patrol and a certified instructor who lives in Marfa, and have him ride along on your first attempt. Access into the canyon is restricted, so for landing use the Hot Springs Airport (get advance permission from owner Jennifer Weaver, 432-229-4214) or Marfa Municipal Airport. You can stay overnight at Chinati Hot Springs, owned by Fort and frequented by archaeologists; be nice to the manager, Dianna Burbach, and she might take you on a hike to look for arrowheads (432-229-4165, chinatihotsprings.net).