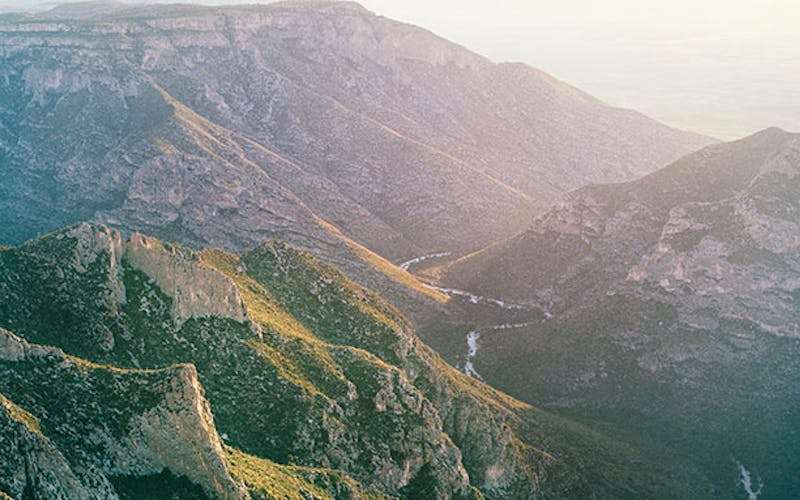 It took an arid two-hour drive from the Guadalupe Mountains National Park headquarters, but as we finally pulled into Dog Canyon one April morning, its exquisitely alien splendor left us speechless: the whispering pines, the quartz-specked rocks in a dry creek bed, the broad-tailed hummingbirds, the fields of bear grass dotted with sotol and yucca. My friend Perry, who has joined me on river runs in Montana and on mountain bike rides near Denver and Durango, sucked in his breath, then spit out a mild confession: “I thought you had to go to Colorado to see scenery like this.”

Our plan was to hike to McKittrick Ridge, where we would camp for the night at more than seven thousand feet, and then descend into McKittrick Canyon. As we began our west-to-east climb, grassy meadows gave way to thick stands of juniper and fir trees. The rocky cliffs of the mountains hung like surreal portraits before us. Horned lizards and deer scampered in different directions. We encountered no one. After about seven and a half miles, we reached our campsite and, with daylight still to burn, dropped our packs and kept exploring. A peregrine falcon took flight from a sharp promontory on Frijole Ridge nearby, swooping in close enough for us to count his individual talons.

The next morning we lingered before breaking camp, watching the sun climb over the ridge. Many people know that Guadalupe Peak, southwest of McKittrick Ridge, is the state’s highest point, at 8,751 feet, but few may be aware that this park has more wilderness than any other in Texas: in addition to its congressionally designated 46,000 acres, there are 33,000 more acres of de facto wildland. As we descended into McKittrick Canyon, picking our way down a steep scree slope, we felt this raw splendor all around us. We traced the serrated trail past a gigantic granite thumb—the notorious Notch formation—until the path bottomed out on the verdant banks of McKittrick Creek, the only source of water we had come across since leaving Dog Canyon, and trekked by a small stalagmite cave known as the Grotto. The canyon, famous for its colorful riot of maple trees, attracts crowds of leaf-peepers in the fall, but that day it was all ours, quiet except for the breeze and the clacking of grasshopper wings.

Getting There: Dog Canyon, which offers the most direct access to McKittrick Ridge, is located on the north side of Guadalupe Mountains National Park. From El Paso, follow U.S. 62/180 east, then take FM 1437 through Dell City, turn right onto FM 1576, and continue to the canyon (note: the smaller roads are unpaved). The canyon is open daily, $5. Its ranger station is staffed intermittently, so it is wisest to stop first at the park’s headquarters, in Pine Springs (reached by staying on U.S. 62/180 from El Paso, 915-828-3251). Camping is $8 a night; backcountry permits, required for camping, are free.