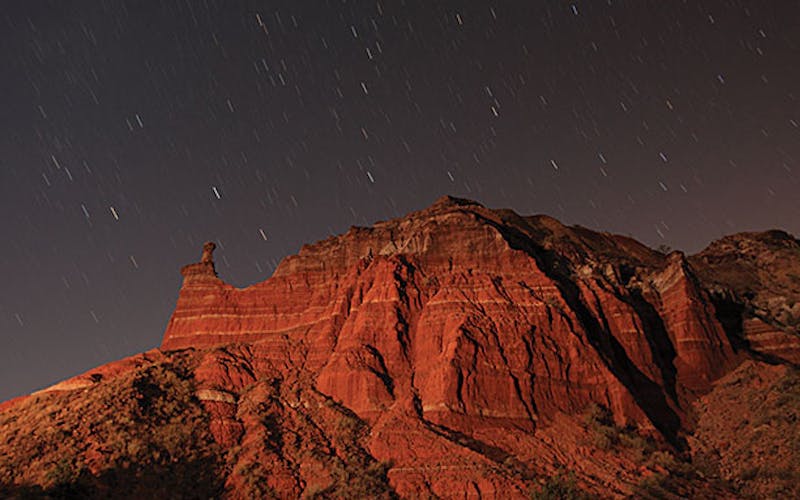 It’s one of those lovely West Texas spring days, when the rain has washed the air clean and the desert is in bloom. My wife and I are hiking along the floor of Palo Duro Canyon amid chinaberry and sotol and juniper, following a small, clear stream with the implausibly grand name of the Prairie Dog Town Fork of the Red River. A red-tailed hawk circles overhead. Above us rise the towering canyon walls. Human beings have lived and taken shelter here since the end of the last ice age, some 13,000 years ago. It is also here that the Comanche, the dominant military power on the South Plains, famously made their last stand in the Red River War.

The canyon looks wild and pristine in the early morning, and in the absence of any other hikers we barely have to imagine the old days at all: they are right in front of us. Here, in the company of wild turkeys and roadrunners, we can practically see the ghosts of the last free Native Americans as they take refuge from the white men they’re warring against—carrying water over the clay soil, stockpiling supplies in caves, building their lodges. Nor is it difficult to conjure that fateful morning in September 1874, when, just a few miles southeast of us, a column of blue-uniformed soldiers under the command of Colonel Ranald S. Mackenzie made its way silently down the canyon’s steep walls and attacked a large Indian camp. The Indians, mostly Comanche and Kiowa, were still asleep; they had been told by a Kiowa medicine man that no bluecoats could possibly penetrate the canyon. Startled into a panic, they tried desperately to protect their horse herd, but it was too late: Mackenzie’s men captured 1,400 animals, and the fleeing Indians were forced to leave behind their clothing and lodges and all of their winter food supplies. Because Mackenzie knew the strategic value of horses, he later ordered about 1,100 of them shot. A pile of their bleaching bones remained for years, as though to document the end of two hundred years of Comanche dominion.

Palo Duro Canyon is a massive spread of complex geology. It is some sixty miles long and averages six miles in width. In its western reaches it is about eight hundred feet deep. After the Indians left for Oklahoma reservations, cattleman Charles Goodnight laid claim to the canyon, this time to raise his vast cattle herds. He co-founded the Panhandle’s first ranch—the JA Ranch—and erected some of the first buildings in the region. Within a few years he had acquired more than a million acres, much of it in the canyon, along with a herd of 100,000 cattle. Soon he was stringing barbed wire in the draws and side canyons where the Comanche had once hunted buffalo.

After our hike, my wife and I head back to the rim and look out over the canyon’s enormous expanse. It occurs to us that you can see it however you want to: as the death of the old Comanche empire or the beginning of the new “civilized” West.

Though most of it is private land—including part of the still prosperous JA Ranch—the 28,000 acres that make up Palo Duro Canyon State Park are the most breathtaking, an abrupt, uneven landscape made all the more dramatic by the strata of rocks that vary crazily in hue: the bright reds of the Quartermaster shale, the yellow and lavender mudstones, the sculpted sandstone that has been stained over millions of years by iron oxides. As the second-largest in the country, the canyon contains all manner of trails for hiking, biking, and horse riding, including the signature Lighthouse Trail, which winds six miles around an astonishing 310-foot hoodoo formation. The day after our first trek, my wife and I watch the moon rise at dawn over the imposing Capitol Peak, then choose to hike the canyon floor again—and not just because we are people of a certain age who aren’t quite as spry as we used to be. Though the higher elevations offer perspective, they are not where the Paleo-Indians or the Comanche lived.

We find a lovely, winding 2.5-mile trail through the hackberry and juniper groves called the Rojo Grande Trail. It follows the same stream as before, which flows small in these parts, and again we are transported back in time. Life took place down here, in the sheltered, almost cozy river bottoms, in the grass meadows and the timber groves. I imagine the Comanche chief Quanah Parker, with his fierce, untamed Quahadi band in the years before the white men killed almost every buffalo on the South Plains. He’s sitting by this clear stream, watching the wind play in the leaves of a cottonwood and the moon rise over the canyon rim, almost certainly unaware that all of this limitless freedom is about to end.

Getting There: From Canyon, travel 12 miles east on Texas Highway 217 until you reach park headquarters. (Open daily, $5. 806-488-2227.) You can camp on the canyon floor, but the best place to stay is in one of the cabins on the rim, built by the Civilian Conservation Corps in the thirties (call 512-389-8900 for campsite and cabin reservations). In Canyon, don’t hesitate to visit the Panhandle-Plains Historical Museum for further insight into the people of the plains (2503 Fourth Avenue, 806-651-2244).