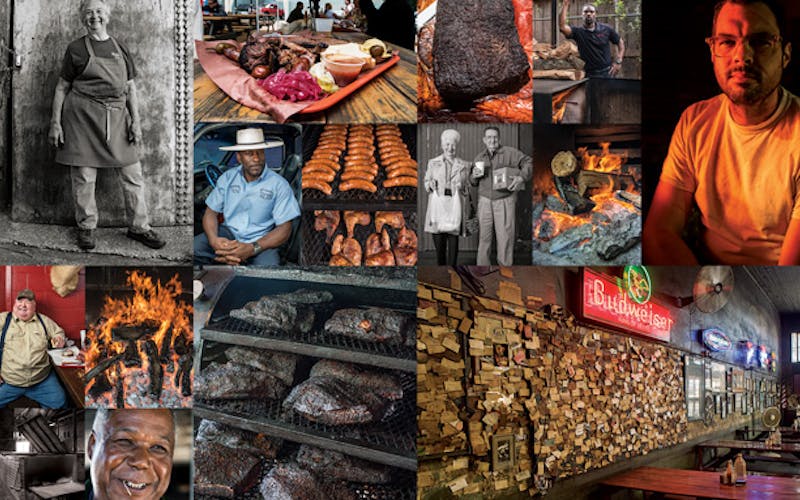 Texas barbecue has no peer on earth. If you’re reading this in Texas, you may wonder why we need to begin with such an obvious statement, but there are people who contend otherwise. In Kansas City they tout paltry slices of gray beef covered in sweet ketchup; the whole thing resembles cold cuts more than barbecue, which is why their arguments generally center on sauce rather than meat. In Memphis they grill ribs over charcoal and fret about whether to hide the product under a pool of sugary sauce or cover it with flavored dust. In the Carolinas they lift their noses and say through pursed, vinegary lips that they invented barbecue. They may have a claim there, but luckily we Texans came along to perfect it.

Let’s back up. The American barbecue tradition is rooted in numerous ancient practices. Caddo Indians had a method for smoking venison, and in the West Indies, natives grilled meats on a frame of green sticks. When European colonists arrived in the New World, no doubt tired of all the salt cod from the long Atlantic passage, they found a local populace given to roasting all manner of game—iguanas, fish, birds, corn, pretty much anything at hand. The Europeans’ contribution to this scenario was to introduce a tasty new animal: the hog. Not only was this beast a marked improvement over the previous fare, but its own gastronomic habits proved well suited to the slop-filled environs of the burgeoning Eastern seaboard. In rural areas and colonial burgs, pigs would roam freely, indiscriminately eating trash until someone decided to roast them, which was done in the local manner—a hole in the ground, a fire, and a split hog laid directly above it on a wood frame.

Barbecue might never have advanced beyond this crude stage but for the fact that another type of animal had come to these shores at the same time as the pig: the cow. Eventually, bovines made their way up through Mexico to the vast grazing lands of Texas, and it didn’t take long for us to figure out what to do with them. We started out by placing the beef directly over the flames but eventually adopted a more elegant approach by which the meat was smoked to tenderness in a chamber with a fire pit at one end and a chimney at the other. Over time, barbecue proliferated throughout the state, eventually leading to the opening of commercial establishments like Elgin’s Southside Market, in 1886, and Lockhart’s Kreuz Market, in 1900. We’ve been arguing about barbecue joints ever since.

Unlike our friends in the South, however, our arguments involve only the important stuff—not who has the better sauce or rub but who has the best meat. And in Texas, this means beef. Sure, we smoke hogs, in the form of spareribs, pork chops, or even (gasp) pulled pork, but we specialize in the Mount Everest of barbecue: brisket. In all of barbecuedom, there is no greater challenge and no greater reward.

This year marks the fifth time that Texas Monthly has sought to identify the state’s finest purveyors of smoked meat. In 1973—our first year of publication—we selected the top twenty joints in the state, singling out Kreuz Market and Taylor’s Louie Mueller Barbecue as the best of the best. In 1997 we expanded our list to include the fifty best joints, with Kreuz and Louie Mueller still at the top. Both were—and remain—exemplars of the German meat-market style, which has always been, in this magazine’s opinion, the primary form of Texas barbecue. It’s true that we can boast tremendous diversity in our methods—from the glazed ribs of East Texas to the cowboy style found farther west—but the Central Texas holy trinity of brisket, sausage, and ribs (beef and pork), smoked for many hours in an indirect-heat pit and served on butcher paper, remains this state’s finest contribution to the genre. Until recently, that kind of meal was synonymous with small-town joints like Kreuz and Louie Mueller. For most of the twentieth century, Texas barbecue was an indisputably rural phenomenon. Sure, there were a few iconic places in urban areas—Angelo’s in Fort Worth, Otto’s in Houston, Sonny Bryan’s in Dallas—but they were hardly citified. Our first fifty-best lists of the new century, compiled in 2003 and 2008, showed little change in that regard.

Then something happened. A tectonic shift occurred. Over a few short years, beginning around 2009, an unprecedented number of brand-new, very good joints opened up. (Sixteen of this year’s top fifty—including two of the top four—were not even in existence five years ago.) Even more unusual, most were in cities, operated by fanatical young pitmasters like Houston’s Greg Gatlin of Gatlin’s BBQ, Dallas’s Justin Fourton of Pecan Lodge, San Antonio’s Tim Rattray of the Granary, and the biggest sensation of them all, Aaron Franklin of Franklin Barbecue, in Austin. They were traditionalists, students of the canonical joints, disciples who would bring the old ways into a new age and a new place. And they found an enthusiastic reception among not just longtime barbecue hounds but also the growing ranks of the food-obsessed, the type of people who shop at farmers’ markets, stock their fridges with artisanal pickles, and tweet pictures of their meals. Suddenly, that most traditional of foods—pit-smoked meat—was reaching a much wider audience.

We are now in the golden age of Texas barbecue. A new generation has arisen to take its place beside the stalwarts, and together they are producing more truly exceptional brisket, ribs, sausage, pork loin, pork chops, pork butt, hot guts, prime rib, chopped beef, and chicken than ever before. The pitmasters featured on the following pages offer the closing argument in the long-standing case of Texas barbecue versus the world. That case may now be considered closed.