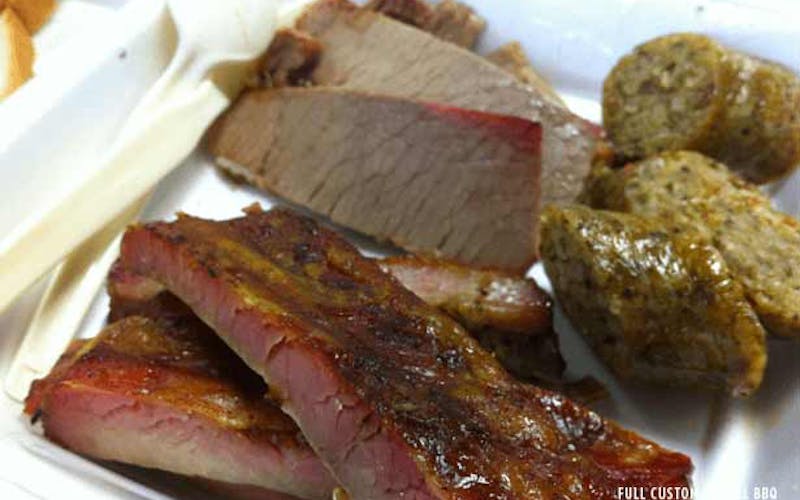 The boudain had a casing crispy enough to be eaten.
Full Custom Gospel BBQ

Owner and pitmaster Bob Allen is just as guarded as he is hospitable, so don’t expect a pit tour here. But though we could not see the equipment, we were assured that no gas was used in the preparation of the meat. The menu is simple, but it does include a few items of note. The spicy boudin was outstanding, with a casing taut and crisp enough to be eaten and a filling that was a good balance of savory, gamey, and spicy. You’d have to go to Louisiana to find better, but you could go a whole lot farther and still not turn up a better cobbler anywhere. We sat there for a long while, alternating bites between the pecan and peach, but a winner couldn’t be declared. Get them both—and some more to take home. The ribs and brisket aren’t half bad either. The St. Louis–cut ribs are thin on the meat, but what’s there is good and smoky. The seasoning is almost nonexistent, but the flavor of the pork and smoke is deep. Getting top-shelf brisket here takes some effort, but it’s worth it. When Allen starts slicing, ask for some of the crusty edge slices. This is where all the good stuff lives, but unless otherwise advised, Allen trims it off, because a lifetime of bad barbecue has conditioned his regulars to expect the area’s usual monochromatic gray rectangles when they order brisket (when we heard this, we experienced a moment of sorrow). With the bark left on, the intensity of the smoke collides deliciously with the moist and tender meat beneath. If you’re lucky, you might even get a condensed nugget of salty, crusty fat clinging to the edge of a slice. All you have to do is pay attention and ask nicely. Allen is mostly eager to please.