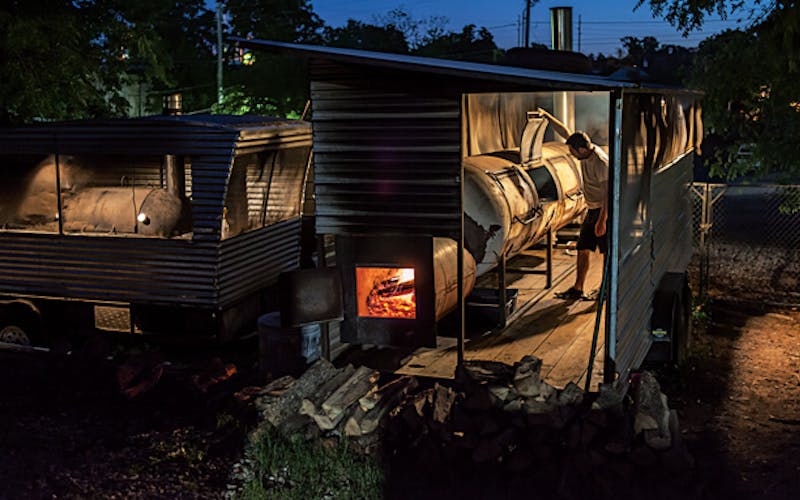 Aaron Franklin checking one of his pits.
Wyatt McSpadden

Opened: 2009
Pitmaster: Aaron Franklin, age 35
Method: Post oak; indirect-heat pit
Pro tip: Waiting in the long line can be fun; even more fun is ordering ahead of time. The minimum is five pounds, but best of all is getting a whole brisket (around $100; try your luck at least two weeks in advance). Pick it up at ten-thirty and waltz through the impatient masses with your bounty.

The best barbecue joint in Texas is only four years old. This is an unusual development, but one that will surprise no one familiar with Franklin Barbecue, which, since opening in 2009, in a trailer off Interstate 35, has built a cult following for its meats. Has any other restaurant in Texas history had a consistent two-hour wait, outside, in the elements, year-round, six days a week? Franklin’s current location is a cozy old brick building (it used to be Ben’s Long Branch Bar-B-Q) with cement floors, sixties-era decor, and a sound system that pumps out a steady diet of laid-back country tunes. In two years, this site has become an Austin landmark, as synonymous with the city as the Armadillo World Headquarters once was. On a recent visit we met a guy from overseas who claimed to know nothing else about the state capital except that it was home to this magnificent restaurant.

The root cause of the mania is simple: Aaron Franklin (who runs the joint with his wife, Stacy) has achieved with his brisket a level of perfection that is rare for any cook to attain with any food, let alone one so notoriously difficult to master. The Franklin brisket (all-natural beef smoked for twelve to eighteen hours) comes out profoundly flavorful and moist with a rich, dark, salty-peppery crust and a rim of sublime, flawlessly rendered fat. This, in fact, is part of Franklin’s secret: his hormone- and antibiotic-free beef—uncommon for a barbecue joint—seems to behave a little differently on the pit; the fat, in particular, yields more readily to low heat than the denser fat found in the usual over-the-counter brisket. That may sound overly technical, but just put it in your mouth: it’s nothing short of astounding how good this meat is. The lean brisket is more tender than most joints’ fatty slices. As for the burnt ends, well, we are unashamed to say that we’d sell our soul for a pile of them. No brisket was ever less in need of assistance, but Franklin’s espresso sauce—deep and velvety, with a subtle sweetness—is a remarkable complement to his beef. Together, the two make a knee-buckling marriage of flavors. So after enjoying several unadorned slices, go ahead and dip one. It’s okay.

Part of what makes Franklin so good is his unbelievable consistency with brisket. But he’s no one-trick pony. The meaty pork ribs have a delicious pepper-rimmed crust, and the beef-and-pork sausage, made locally to his specifications, has a great snap. (This is the only possible gripe we can find with Franklin Barbecue—the sausage isn’t made in-house.) Drifting outside the Central Texas canon, Franklin offers pulled pork that’s tender and smoky, with a dash of vinegar sauce. The turkey, a meat we normally avoid, is infused with smoke flavor and has a great crust; on a recent visit slices stayed moist for an impressive 45 minutes. Other not-to-be-missed signature offerings include the Tipsy Texan sandwich (chopped beef and sausage piled very high with slaw) and a heady bourbon-banana pie.

It is inevitable that there will be backlash when any restaurant reaches the heights that Franklin Barbecue has attained (earlier this year Bon Appétit named it one of the country’s twenty most important restaurants, a list that also included fancy-schmancy New York eateries like Le Bernardin, Balthazar, and Momofuku). But this meat is worth every bit of praise it has received—and every hour you spend waiting to eat it. Experiencing Franklin Barbecue right now is like watching Lance Armstrong or Barry Bonds at their performance-enhanced best, when they seemed to magically tower over everyone else. Except Aaron Franklin is doing it clean (not counting the enormous amount of espresso he consumes every morning). And, we might add, doing it with modesty and thoughtfulness, despite the pressure that comes with such a meteoric rise. At this point, he could probably take his press clippings and go big-time, opening a three-hundred-seat Texas-style joint in Times Square and laughing all the way to the bank. But at heart, he’s still a kid from Bryan who just wants to make good ’cue (he has, however, started selling his sauce at H-E-B). Let us give thanks that he keeps dragging himself out of bed in the early-morning hours to cook for us.